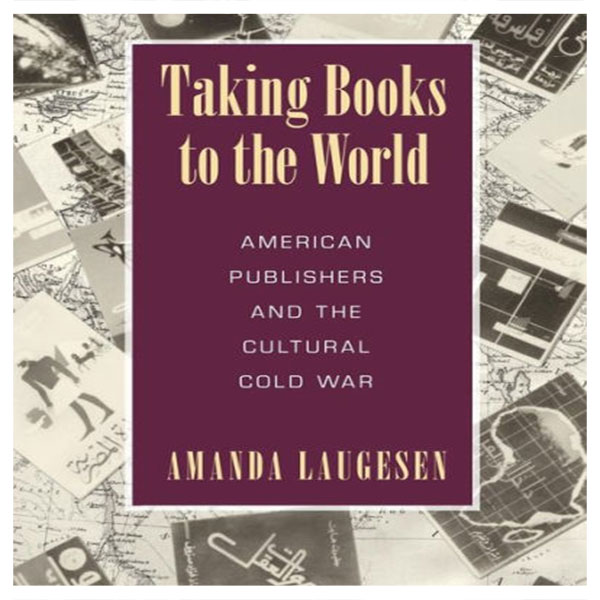 In Amanda Laugesen’s new book, the novel is an object of war. In Taking Books to the World: American Publishers and the Cultural Cold War (University of Massachusetts Press, 2017), Laugesen tells the story of Franklin Publications, a publishing company created in 1952 as a joint project between American publishers and the USIA. Amid the scramble for influence during the Cold War, Franklin was tasked with disseminating books that promote American ideals throughout the developing world.

Laugesen explores how Franklin balanced the imperialist undertones of its endeavor alongside publishers’ genuine desire to establish publishing infrastructures in developing countries. She also chronicles the increasing tension between Franklin and the USIA, culminating in Franklin’s ultimate demise in the 1970s. Taking Books to the World: American Publishers and the Cultural Cold War sheds new light on American Cold War antics and the importance of books in the history of war and globalization.

Austin Downey: You’ve said that the use of books to promote American ideals was not new to the Cold War, but was actually used by the United States during World War II as well. What are some of the ways in which the dynamic between publishers and the United States Intelligence Agency changed during Franklin Publications’ time, and how did this signal a shift in American politics and thought?

Amanda Laugesen: Publishers initially embraced the opportunity to work with the government to prosecute the cultural Cold War, also seeing potential commercial benefits (entering new markets). However, as time went on, publishers increasingly resented the constraints and requirements that government put on them. They were frustrated by the ways in which programs were executed (especially the focus on short-term goals and outcomes). They also were concerned by the propaganda and political elements of USIA policy. This was tied to changing views on the Cold War, especially through the 1960s and into the 1970s, when concern increased over the U.S.’s involvement in Vietnam, support of authoritarian figures, and so on.

One of the biggest sources of tension between Franklin Publications and the United States Intelligence Agency was the choice of books to introduce in developing countries. What were some of the books that caused the most tension, and why?

The real tension was over what they called the principle of “local selection.” Franklin worked on the basis of providing a list of possible texts for translation to regional offices (eg in Egypt, Iran, Pakistan).Those offices would select the books they thought best suited local needs. However, the USIA wanted to make these choices—Franklin stuck by its principle, but this was a source of tension. That said, the books on the list were usually those that (roughly) conformed to USIA’s desire to include books that promoted American “ideals” and “values” (e.g. democracy, private industry, etc).

In terms of individual titles, a different sort of tension was around the fact that the U.S. head office and publishers didn’t always approve of the books the local offices pushed to publish—one example is Gone With the Wind. Franklin publishers preferred more “serious” fare.

What is the legacy of Franklin Publications on publishing today, both in the United States and abroad?

A broad trend that Franklin contributed to was the increased circulation and dominance of American books globally. While it was difficult for American publishers to establish themselves in some areas, in others they were able to have considerable influence. In Iran, for example, American books in translation increased considerably in the years following World War II and before the Revolution.

Do you think there is a contemporary equivalent to Franklin Publications, perhaps in another form of media, that is being used today to promote American ideals globally?

This is a tricky question. There is no USIA anymore, of course, and the U.S. is perhaps no longer focused on trying to improve its image abroad (under the current administration, one would say definitely not). American cultural products are still consumed globally but I don’t know the extent to which government involves itself in this.

One of the main things I did at the Ransom Center was to look at the Knopf collection, an individual publisher who worked with Franklin and with the USIA. (Franklin’s files are held at Princeton, with a chronological set at the Center). The Knopf papers enlightened me on how a publisher viewed the USIA and its programs, and how that relationship changed over time. They demonstrated how the cultural Cold War is not a simple story of propaganda. It involved complex motivations, activities, and outcomes.

For publishers, their motivations for involving themselves with government were diverse, and their experiences didn’t always match their expectations. They often found themselves very frustrated with government and with bureaucratic processes. The Knopf papers (along with the Franklin material) also revealed the complex story of translation and publication.

As to the second question, I think archival material is very important in any historical project—archival material reveals the complexities of the past, and also can add new dimensions to our understanding of something like the cultural Cold War. I hope my project also contributes to a growing scholarship seeking to uncover the global dimensions of both the cultural Cold War and the history of mid-century publishing and book culture.

Amanda Laugesen is an Associate Professor at Australian National University and the Director of the Australian National Dictionary Centre. She was the recipient of a Harry Ransom Center fellowship supported by the Alfred A. and Blanche W. Knopf Research Fellowship Endowment.