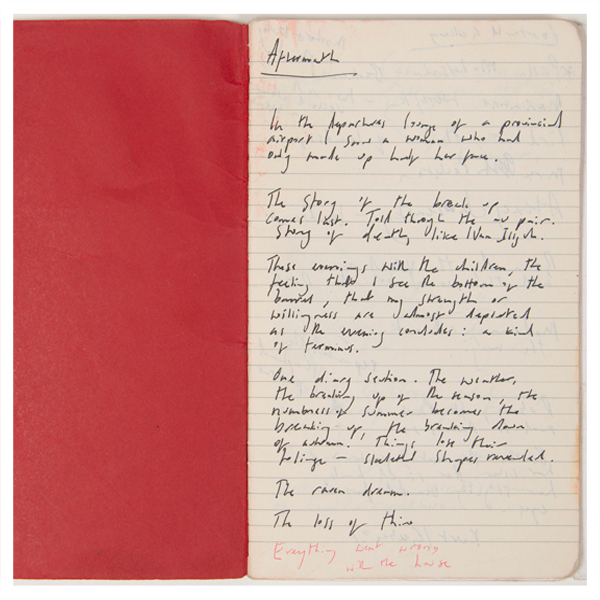 The Ransom Center acquires the papers of Rachel Cusk. Below, Cusk describes her writing process.

When I was writing my first novel I frequently dreamed that the house I was living in was on fire and that I was unable to rescue the manuscript. I took this same manuscript with me everywhere I went: the exteriorising of what was inside me, the creation of it as a physical object, was so momentous and alarming that I often felt more like its guardian than its author.

Years later, when I had children, this feeling – that I had created something worth more than myself, or produced an embodiment of myself that I could value – returned. I was again its guard, and it seemed to me that what I was guarding was the struggle towards intelligibility and autonomy.

The process by which I conceive a piece of work has never been especially palpable. I tend to see it, suddenly and entire, in a single glimpse. The question is how I bring what I have so briefly seen into public existence. I immediately make a set of notes that are like a photograph of it: they record, in one frame as it were, what it looked like to me. Then there is a long period – of months and occasionally years- while I work out what it is. Of this rumination I write down almost nothing: instead I test the image against life, from as many perspectives as I can. If I decide that it does belong to life, that it is real and viable – and in deciding this I have had to learn everything about it – I write it, usually quite quickly. What I write nearly always conforms to the note-photograph I made at the beginning.

I don’t know whether my writing process has developed in this way because of my particular circumstances and the life I have lived: I have never had very much privacy. As a child in a large intrusive family and then at boarding school, I wrote diaries that people openly read and were provoked by. The diary was the first form in which I found any power, but I quickly abandoned it: it was too artificial, both too social and too shaming. Most of my work has been written while bringing up children: I have had very little time alone and have had to hold a great deal in my head. Writing things down has become, for me, almost purely performative, to the extent that I can ruin or extinguish the ‘real’ writing by writing things down too early, before they are ready. When my children were small I used to fantasise about the writer’s life, the life I believed other writers were living: one in which you were what you appeared to be, in which the holding it in one’s head wasn’t necessary, in which the physical world exactly reflected the mental environment. My physical world was fragmented, scattered everywhere by the weather of domestic life and its cycles of servitude and change and destruction and renewal.

Sometimes I tried to create a record of my mental life, to collect some orderly evidence for it: I would hold on to draft manuscripts for a while, but if they didn’t get used to light the fire or for the children to draw on, they were abandoned in the next house move. Against the force of emergency – of enactment, of ‘live’ action – that runs so strongly through family life, I could never exert myself to defend the dead testimonials to my past work. And perhaps my work became a living thing to me in a way it otherwise wouldn’t have done. I did, however, keep hold of my notebooks, in which the ‘photographs’ of my conceptions were taken. Most of them show evidence of daily life trampling through them; they were far from sacrosanct, far from being the ‘writer’s room’ of my fantasy. But being small and lightweight and easy to carry, they survived.