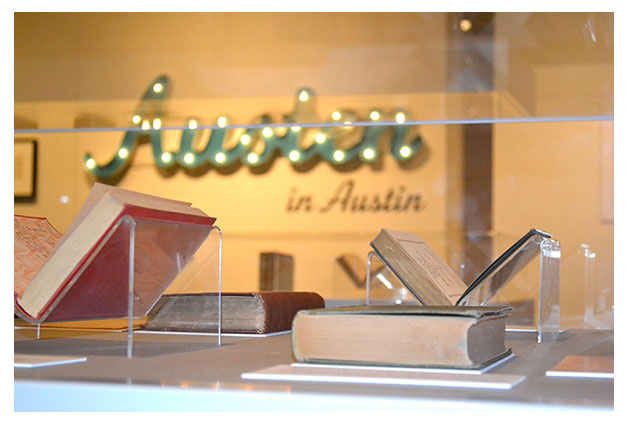 During the latter half of the nineteenth century, cheap and shoddy reprints of Jane Austen’s novels brought her work to the general public. These inexpensive volumes were sold at Victorian railway stations for one or two shillings and targeted to Britain’s working classes. Few of these hard-lived books survive, yet these versions of Austen’s novels substantially increased her early readership. These books were bought and read widely, but due to their low status and low production values they remain largely uncollected by academic libraries and unremarked by scholars.

In The Lost Books of Jane Austen, I show how the tatty and common Austen volumes produced in heaps by nineteenth-century publishers have disappeared, leaving only the authoritative and elegant editions granted a scholarly seal of approval.

In Britain, the waste paper drives of both World Wars ensured that many cheap editions deemed unimportant were simply pulped. In America, ill-placed concerns about acidic paper resulted in nineteenth-century books being tossed by librarians favoring storage on microfilm.

My research challenges traditional opinions about what constitutes an “important” version of a book. I want to democratize the history of Jane Austen’s reception and show how cheap versions read by working class readers, non-scholars, and school-children affect literary reputation. Cheap books tell a story about Austen’s fame that differs from the record of precious first editions painstakingly safeguarded by collectors.

Original, authoritative, and handsomely illustrated editions in the nineteenth century helped Austen’s early visibility, to be sure, but so did the numerous unsung reprints at the bottom end of the book market—and in messy and startling ways. By literally cheapening Austen, these versions showed an everyday writer whose public appeal differed radically from the official canonical author proffered and supported by those fine editions. Jane Austen may have been popular long before she was considered great!

The Ransom Center has its own unique history of collecting. Its holdings of Jane Austen offer a single-author window onto the evolution of modern collecting practices during the past half century. The Ransom Center, learning of my research, gave me the opportunity to curate their Jane Austen materials to tell the story of modern collecting in a special exhibition titled Austen in Austin. In 1957, when the Harry Ransom Center was founded, first editions of major writers were an acquisition priority for a library with world-class aspirations. Soon, the Ransom Center owned an enviable number of Jane Austen’s novels as rare firsts. Then, and as great writers are great readers, all manner of Austen copies began to arrive among the books and papers of other authors. Elsewhere, such unexpected “duplicates” of titles already owned in loftier editions might have been culled, but the Ransom Center held on to these books. Lucky for us, because these incidental catches of Austen now track her influence on other writers and artists.

The Austen in Austin section of the Stories to Tell gallery irreverently mixes high-value and low-value items from the Ransom Center collections. There are plenty of jaw-dropping first editions as well as a surprisingly large number of Austen family books. But there are also ordinary reprints made extraordinary by former owners plus rare commonplace versions of Austen’s novels, not the traditional stuff of collecting, that entered the Ransom Center as part of other scholarly archives or projects. Austen in Austin is on view through Jan. 5, 2020. Admission is free.

Janine Barchas is a professor of English at The University of Texas at Austin and the author of The Lost Books of Jane Austen (Johns Hopkins University Press, 2019).