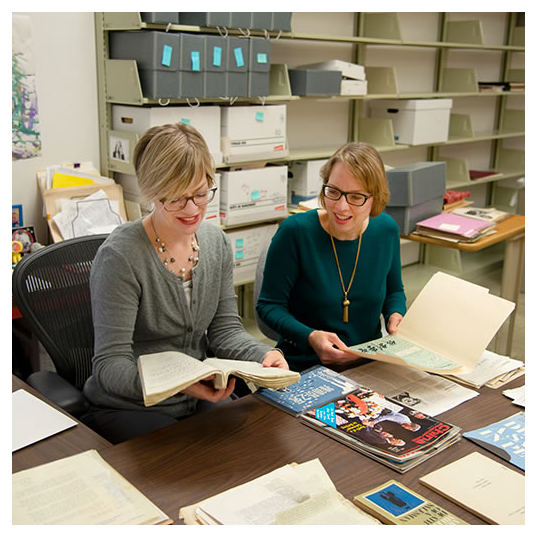 The complete archive of Arthur Miller, one of America’s most acclaimed playwrights, is now available for teaching and research use at the Harry Ransom Center at The University of Texas at Austin.

“With the opening of the Arthur Miller papers, the Harry Ransom Center becomes the essential destination for the study of the life and work of this giant of the American theatre,” said Stephen Enniss, director of the Ransom Center. “My colleagues and I look forward to supporting the work of students and scholars who will study this archive for new insight for generations to come.”

Arthur Miller (1915–2005) established the collection with two donations of his early manuscripts in 1961 and 1962, including drafts of “All My Sons,” “Death of a Salesman,” “The Crucible,” and other early plays. The archive expanded significantly with the acquisition of his remaining papers in 2017. This united and complete collection of Miller’s personal and professional papers is the primary record for research and study into the life and work of this major American playwright.

This expansive collection of more than 300 boxes documents every phase of his remarkable career, from his earliest writing while a student at the University of Michigan, through his major work of the 1940s and ’50s, through the writing of his late plays. The archive includes more than 50 journals compiled from the 1940s through the 2000s, family correspondence, working drafts of all of his plays (including unpublished work), notebooks, and correspondence with notable theatrical and literary colleagues including Edward Albee, Saul Bellow, Norman Mailer, Cynthia Ozick and John Steinbeck.

“There is a lot more to this archive than just his manuscripts,” said Ransom Center Cline Curator of Theatre and Performing Arts Eric Colleary. “This collection captures his ideas and personal thoughts and contains fragments of writings never completed, all of which helps paint a much broader image of Miller. There is a great deal here that has never been seen before.”

Miller’s contribution to the American theatre is immeasurable. His creative work includes essential plays such as “Death of a Salesman” (1949), “The Crucible” (1953) and “A View from the Bridge” (1955), which continue to have contemporary relevance. Over a distinguished career, Miller received many honors including three Tony Awards, the Kennedy Center Honors, the Theatre Guild National Award, an honorary Molière Award, the National Book Foundation Medal for Distinguished Contribution to American Letters, and a Pulitzer Prize for “Death of a Salesman.”

As a public figure and intellectual, Miller was highly engaged with social and political issues of his time, which is also reflected in the collection. From 1965 to 1969, Miller was president of International PEN (Poets, Playwrights, Editors, Essayists and Novelists), an organization that evolved into an international advocacy group for human rights and freedom of expression. The Ransom Center also holds the papers of PEN International and English PEN, which include substantial materials related to Miller’s work with the organization. A recent project funded by the National Endowment for the Humanities and completed by the Center resulted in a new online finding aid for researchers and access to teaching guides and nearly 5,000 digitized PEN records at ransom.center/PEN.

“This archive captures current events, social concerns and the morality of the time, because Miller is writing very much in the moment of significant historical events in 20th-century American history,” Colleary said. “We expect a broad range of research interest not only about Miller, but also projects about McCarthyism and the communist witch hunts, American politics in the ’50s and ’60s, and Miller’s efforts dealing with censorship on an international level. You can trace the roots of the Cold War in the Great Depression through his experiences. The papers center around Miller, but Miller also becomes a way to look at so many important moments in history.”

Miller’s archive resides alongside the papers of other major American playwrights, including Tennessee Williams and Lillian Hellman. His influence on playwrights, actors and writers is evident in the collection materials, and he is a key figure connecting dozens of collections held at the Ransom Center.

The archive is now accessible, and scholars researching his work may access the newly cataloged papers in the Reading and Viewing Room. The current finding aid is available online at ransom.center/arthurmiller.