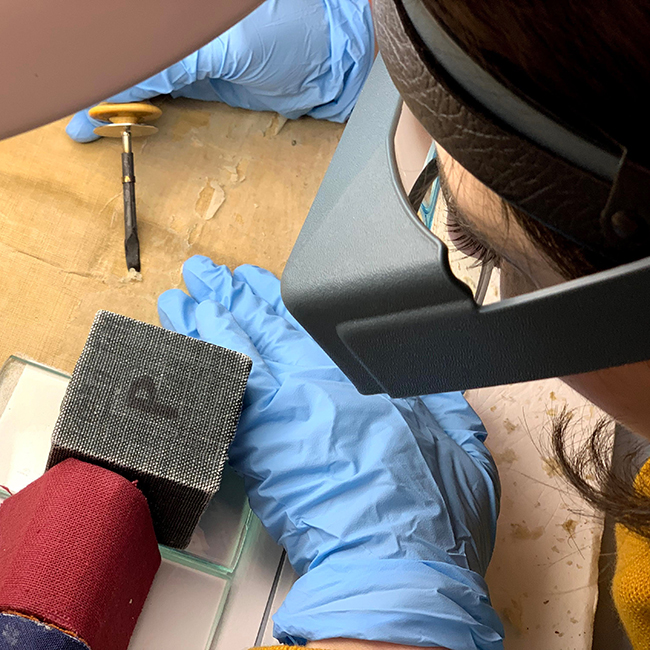 Paper Conservator Jane Boyd and I have completed the removal of a modern adhesive used to attach fabric strips and a hanging rod to the top edge of the Blaeu World Map. These strips had constricted the map along the top and bottom edges, creating and cementing creases and undulations that are concealing some information on the map and causing paper fractures and tears.

In order to reach the adhesive, the hanging rod was removed from the modern fabric pocket, and the fabric strips were carefully pulled away, leaving a layer of the adhesive. Upon closer examination and after conducting solubility tests on the adhesive, I found that it was not soluble in water, and only slightly soluble in ethanol.

To begin removal, heat was applied to see if the glue would soften under higher temperatures. Luckily, it did, and we were able to use small hot tools in the shape of tiny spatulas to carefully separate, lift, and remove the adhesive from the back of the map. This treatment step was incredibly painstaking and detailed.

A 3-inch strip along the entire length of the top and bottom edges, the adhesive covered 720 square inches of the map. In total, the removal of the fabric strips and adhesive took approximately 165 hours to complete.

Now, we are moving on to the next treatment step – the relaxation of the deep creases released from constriction caused by that adhesive. This is done by using a controlled amount of deionized water, brush-applied to the crease, which is then gently pressed open and placed under weight. Once the sharp creases are relaxed in this manner, we will humidify the map overall to re-allocate the stresses caused by the creases.

Another aspect of this project is planning for a frame in which the map will be stored and exhibited. Ken Grant, Head of the Paper Lab, is spearheading the effort to devise proper housing for both the map’s continued preservation and its exhibition in the galleries sometime next year.

Efforts to stabilize and conserve a rare 17th-century Dutch map housed at the Ransom Center are ongoing. To follow the entire story, read previous articles about this project. Members, donors, and visitors are helping set the course of this amazing project as conservators preserve the one-of-a-kind map, revealing new discoveries about its production and significance. Learn more at https://40for40.utexas.edu/giving-day/19787/department/29215.