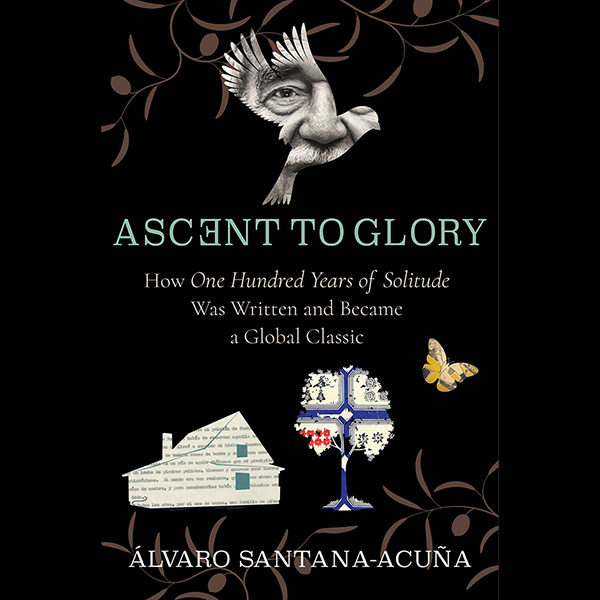 Nobel Prize-winning author Gabriel García Márquez’s masterpiece, One Hundred Years of Solitude, was published on May 30, 1967. A new book by Ransom Center guest curator and Whitman College assistant professor Álvaro Santana-Acuña–Ascent to Glory: How One Hundred Years of Solitude Was Written and Became a Global Classic (Columbia University Press, August 2020), explores how the novel achieved success and what it reveals about how a work of literature becomes a classic.

During the summer of 1965, as an unknown writer was driving from Mexico City to Acapulco for a vacation with his wife and two children, a cow crossed the road in front of his car. He stopped abruptly. Right there on the road, in a stroke of brilliant insight, the writer came up with the first sentence of a novel that would change world literature: “Many years later, as he faced the firing squad, Colonel Aureliano Buendía was to remember that distant afternoon when his father took him to discover ice.”

Now there was not a second to lose. The writer turned his car around and rushed back home to Mexico City. He quit the job that supported his family and locked himself up in his studio in order to finish the novel. Debts skyrocketed as months of writing passed. He fell behind on rent payments, lived on the generosity of his friends, sold his car, and pawned his wife’s jewelry and his typewriter. Nothing could stop him.

Eighteen months later, he emerged from his studio with a completed manuscript. He went to the post office to mail the manuscript to a possible publisher in Argentina. But the bankrupt writer discovered that he did not have enough money to send the whole manuscript. He divided the manuscript into two halves and mailed just one half.

Back home, he looked at the pages still in his hands and discovered that he made a big mistake. He had just mailed the second half of the manuscript, not the first as he had intended. What a terrible way to present the novel that had taken him so much effort to write! Luckily, the pages that he sent astonished the publisher, who knew that the novel would be a great success and hurried to offer the writer a publishing contract. The writer was Gabriel García Márquez and the novel was One Hundred Years of Solitude (Cien años de Soledad).

This story about how this Colombian author conceived One Hundred Years of Solitude is in reality a fascinating myth, now passed on from generation to generation. Parts of this myth are true and other parts of it are not. What is remarkable about these myths is how they often find in the pages of famous books and in the minds of people the most fertile soil to take root and grow. One such myth refers to the artist who, after a stroke of inspiration had to struggle financially in order to create a work of art. But the myth of the creative genius cornered by economic hardship is more than a familiar story. It is a social pattern that magnifies artists and their work. And as myths of this kind grow over time, they obscure important details about how a work of art was really conceived and thereby make it more challenging to explain how it turned into a classic.

To understand how a work of art becomes a classic, one has to explain how it was conceived in the first place, something that happens during what I call the stage of imagination. It refers to the aesthetic ideas, creative techniques, intellectual principles, professional values, and social expectations that enable an artist to imagine a work of art at a given moment. In this stage, artists encounter the first social barriers that they have to overcome, often with the help of collaborators, in order to make the work of art. They need to have a place to work, time to think and to develop their ideas, and certainly they are better off if they have peers and mentors to talk to about their ideas. These are some of the barriers that exist before the ones that artists face during the production and circulation of a work of art. In the case of a literary work, these barriers include finding a publisher, negotiating a favorable publishing contract, dealing with reviews and reviewers, and so on. But instead of talking about those mundane matters, artists themselves often create myths about themselves, and García Márquez was no exception. As One Hundred Yearsof Solitude became a success, he started to disseminate myths about this novel and about himself. One of these myths concerns the novel’s opening sentence.

Over the years, García Márquez offered several versions of how he wrote it. He said he had written nothing in five years when suddenly he experienced the marvelous epiphany on the road to Acapulco. It’s a wonderful story, but the evidence suggests otherwise. When García Márquez sat down to write One Hundred Years of Solitude in fall 1965, his emotional state was identical to his feelings while he was writing his first book Leaf Storm. He described himself this way then: “I see him perfectly: he is a thirty-eight year old man who believes that he will not write anything else in his life, that this is his last chance, and who tries to put everything—everything he remembers and everything he has learned from all the authors he has read.” García Márquez was, indeed, doubtful about committing to writing One Hundred Years of Solitude. His doubts had grown into a dreadful writer’s block.

Critic Emir Rodríguez Monegal saw it firsthand: “When I met Gabo in Mexico in 1964, I saw a man who lived in hell for not being able to write the great novel that he has thought out and written mentally even in its smallest details.” A few months later, writer José Donoso ran into the same anxious man at a professional conference. García Márquez’s correspondence with fellow writer and friend Plinio Apuleyo Mendoza is also explicit about his angst for not being able to succeed as anovelist. And as Mexican literary critic Emmanuel Carballo put it, “He was not famous. All he had been able to achieve was a reputation among intelligent people of Mexico, Latin America, and Spain.” Carballo was the person to whom an unhappy García Márquez confessed in a 1963 interview that he will never be able to write his novel. After repeated setbacks, he turned his back on literature and believed his future was in scriptwriting. “Cinema is much more noble and reproductive than literature,” he explained to a friend in 1965. “Imagine that I am now receiving ten thousand pesos for reviewing a script. And to think that I have wasted so much time of my life writing short stories and reportage. Besides, everything in literature seems to be already written. Literature is great to enjoy as a reader… not as a writer.”

But, five triggering events during the summer and fall of 1965 brought García Márquez back to the writing of One Hundred Years of Solitude. First, in July, the critic Luis Harss interviewed him for a book of conversations with ten major Latin American writers. Second, in July, García Márquez signed a comprehensive contract with literary agent Carmen Balcells, who, aware of the international boom in Latin American literature, had travelled across the Americas to recruit as many clients as possible for her agency. Third, at the end of August, García Márquez attended a momentous talk by his mentor Carlos Fuentes on how to become a bestselling, cosmopolitan writer. Fourth, between August and October, international media outlets such as Life en Español, The Times Literary Supplement, and Papel Literario published articles on new and old Latin American writers, including García Márquez. And fifth, for the first time in his life he signed contracts with major international commercial presses to publish all his previous and future work in Spanish and English, including his novel One Hundred Years of Solitude.

As a result, García Márquez knew that now was the ideal moment to work on the novel he had in mind for more than a decade. He knew that he could easily present it to several publishers as a New Latin American Novel—then a much sought-after product in the international literary market.

When he began to write, he did have difficulty with the first sentence.And, far from having the whole novel revealed to him in that epiphany, he was unsure of how to write the rest of the novel. But García Márquez and his friends spread different versions of his epiphany on the road. Germán Vargas, his friend from Barranquilla, did so in his review of the novel as did critics and scholars in the following years. Some of them even invented new details about the epiphany. Thus, the story of how he wrote the novel has become a myth that different cultural brokers continue to use and reinvent.

Here is one recent example. On August 30, 2018—at the beginning of the school year in most countries—TED Conferences LLC released in a cartoon format one of its talks titled “Why Should You Read One Hundred Years of Solitude?” Widely circulated on several Internet sites, the talk attracted over a quarter of a million views the first twenty-four hours on Facebook alone. The images and narrative of the video (available in twenty-one languages) reproduce the myth about García Márquez’s epiphany on the road to Acapulco.

García Márquez also invented multiple (and contradictory) versions about how he wrote the rest of the novel. In an oft-cited interview with Mexican writer Elena Poniatowska, he stated that “I never read anyone anything [from One Hundred Years of Solitude] because I do not read what I am working on to others.” This goes well with the myth of the man that was in solitary confinement for months in his studio. The reality is that One Hundred Years of Solitude was the product of networked creativity. He shared the manuscript in person and by mail with friends, peers, and critics on three continents. And their feedback shaped the writer’s imagination as he was writing.

As in the cases above, scholars, critics, journalists, and common readers have reproduced and added new and mythical details to this story. For example, in 2016, more than one million readers of the five international editions of Vanity Fair magazine could read in the article “The Secret History of One Hundred Years of Solitude” about García Márquez’s not one but multiple visits to the pawn shop. And as new people learn about this and other myths, some of them feel compelled to repeat these myths or invent new ones, making the novel more meaningful, more classic among old and new generations of readers.

Excerpted from Ascent to Glory: How One Hundred Years of Solitude Was Written and Became a Global Classic by Álvaro Santana-Acuña. Copyright (c) 2020 Columbia University Press. Used by arrangement with the Publisher. All rights reserved.