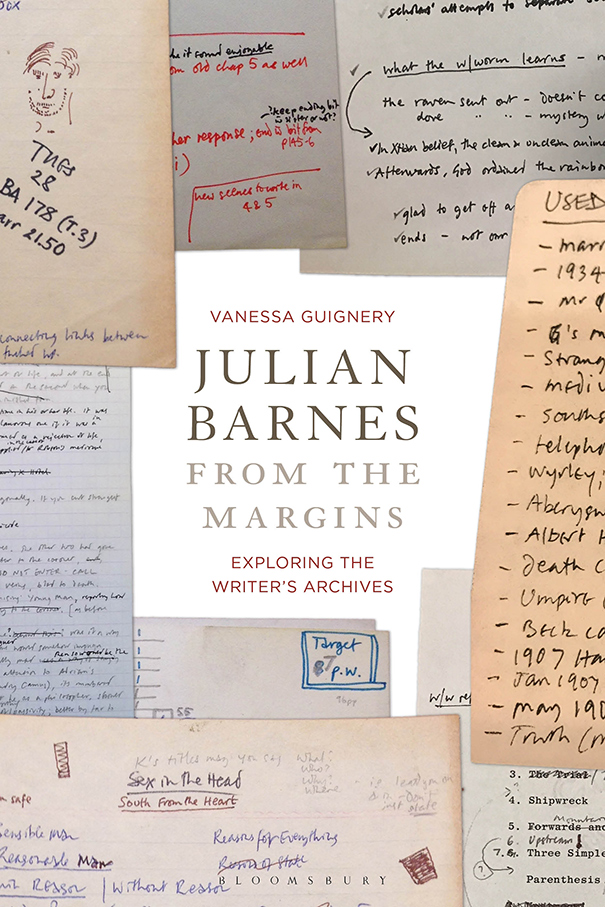 The following is excerpted from the book, Julian Barnes From the Margins: Exploring the Writer’s Archive (Bloomsbury Academic, 2020), by author Vanessa Guignery.

The archives for each of Barnes’s novels reveal a composition pattern that starts with various notes about what to include, followed by several drafts containing longhand revisions and deletions, until a complete draft is sent to Barnes’s friend Dame Hermione Lee for comments, which leads to more revisions. In 2000, Barnes told an interviewer: “Normally I type on an IBM 196c, then hand correct again and again until it’s virtually illegible, then clean type it, then hand correct again and again. And so on.” The novelist firmly believes that writing is in the rewriting. Therefore, “Writing the first draft is usually a great illusion. The first draft makes you think that the telling of this story, whatever it is, is a fairly blithe and easy business. Then you realize you’ve fooled yourself yet again. Then the work, the real writing starts.” The numerous corrections on Barnes’s manuscripts and typescripts attest to how carefully and relentlessly he hones his style and concurs with Flaubert for whom “prose is like hair—it shines with combing.” Therefore, as he points out, “quite substantial things can be changed … even quite late in the day”—be it the name of the characters, the use of tenses or even part of the structure—and “the book can always be improved.”

In some cases, Barnes deconstructs his own text to make sure the scattered elements about a character make a coherent story. Thus, after finishing a first draft of Flaubert’s Parrot, he wrote a note to himself: “read through the Braithwaite bits and see if they make a narrative.” He used a similar method for Talking It Over when he feared Gillian’s voice was being “drowned out” by the voices of the male characters in the competing monologues: “I simply took all the pages out and read her story as her story all the way through. … it’s good to feel the novel physically coming apart like that and then laying it back in place.” He adopted the same technique for the story of Martha Cochrane in England, England in order to achieve the right balance “between the personal intimate life realistically treated, and the large, semi-farcical story of the island:” “When I wasn’t sure whether it was working or not, I simply extracted from the draft of the book all the sections dealing with Martha’s personal life, and then rewrote them as a sort of individual story. Then put them back into the book and made the necessary adjustments.” Asked when he feels he has reached the final version of the book, he replies: “When I find that the changes I’m making are dis-improving my text as much as improving it. Then I know it’s time to wave good-bye.”