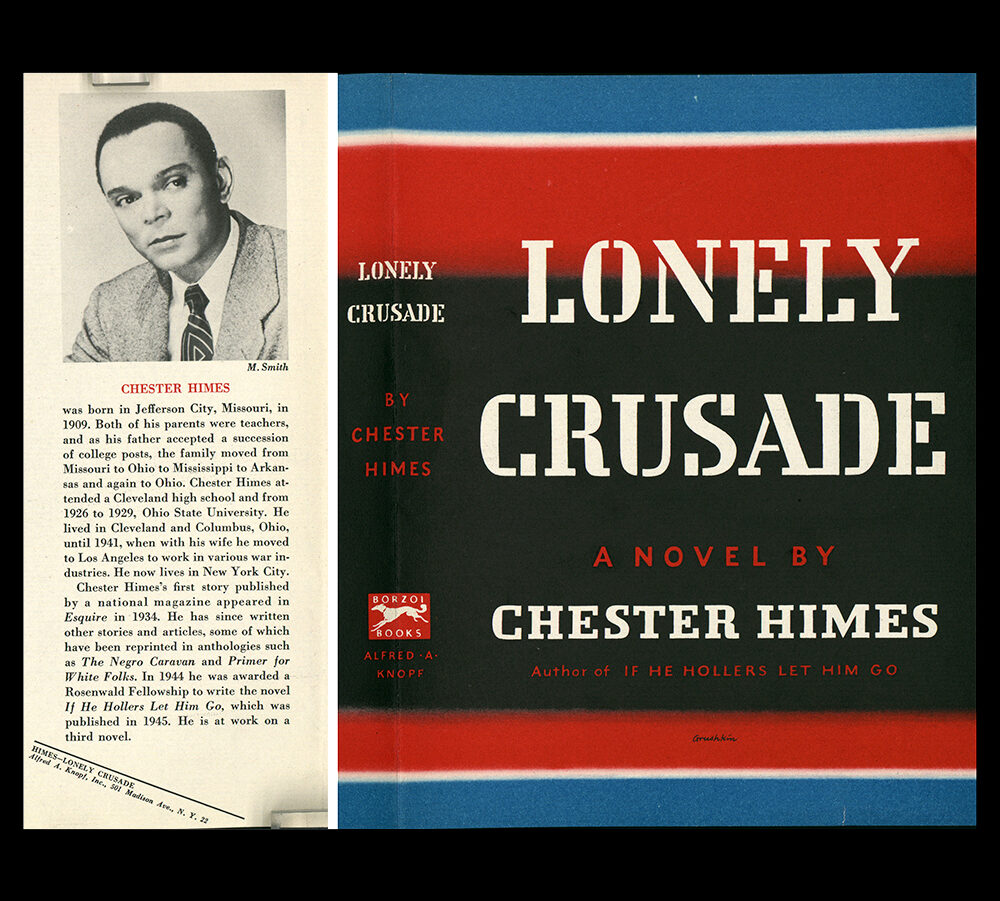 Many writers and artists through history have developed their craft, and even published, while they were imprisoned. Among them is Chester Himes, an African American author who wrote about racism, prison life, and who is best known for his Harlem Detective series.

Himes was born in Jefferson City, Missouri in 1909. Of his adolescence, Himes wrote that he was “lonely, shy, and insufferably belligerent.” 1 Himes was incarcerated at Ohio State Penitentiary at the age of 19, and two years into his 20-plus-year sentence for armed robbery, his first short story was published in an African American–owned magazine, The Bronzeman, in 1931. He also sold articles to Esquire, such as “Crazy in the Stir,” which appeared with the chilling byline “59623,” his prison number.

After his release from prison during the Depression, he held dozens of jobs while focusing on writing novels, screenplays, and making connections with other writers. Himes favored protagonists who were less than heroic or likable, and the enthusiasm for his fiction by other African American writers was often tepid. However, Langston Hughes supported him by introducing his work to his own publisher, Blanche Wolf Knopf.

Knopf asked Hughes to provide a blurb for Himes’s second novel, Lonely Crusade (1947), a novel exploring racism and labor strife during World War II, but Hughes demurred. His reason? “Most of the people in it just do not seem to me to have good sense or be in their right minds; they behave so badly, which makes it difficult to care very much what happens to any of them.” 2

In the summer of 1950, Himes taught a popular creative writing seminar at the North Carolina State Negro College in Durham, where for two weeks he was a celebrity figure. Below is Himes’s letter of gratitude written to Knopf music editor Herbert Weinstock for his publication advice to “new novelists.” 3

Editorial Vice President Seymour Lawrence received this letter in 1964 from Himes, who by this time had expatriated to Paris. Himes writes that he felt it was time for him to publish his memoirs and in this letter, requests an advance on royalties of $400 per month for two years. The Quality of Hurt, volume one of his autobiography, was published by Doubleday in 1971.

Ishmael Reed wrote that Chester Himes was “[A] great writer and a brave man. His life has shown that black writers are as heroic as the athletes, entertainers, scientists, cowboys, pimps, gangsters, and politicians they might write about.” 4

ABOUT MELANIE ALBERTS
Melanie Alberts works in the Office of the Director at the Harry Ransom Center. She serves on the Diversity and Inclusion committee, is a psychic artist, and writes lyric poems which have appeared in journals such as Borderlands: Texas Poetry Review.