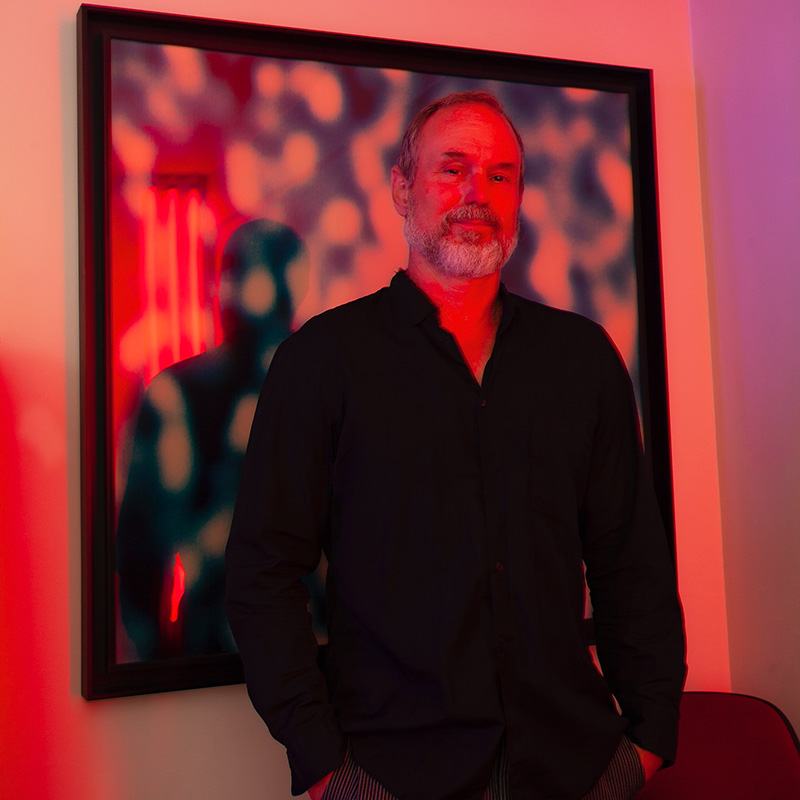 The archive of award-winning lighting designer Kevin Adams is now housed at the Harry Ransom Center. Adams has received four Tony Awards for his lighting designs of Spring Awakening (2007), The 39 Steps (2008), American Idiot (2010), and Hedwig and the Angry Inch (2014). Adams is a UT alumnus, and he received the E. William Doty Distinguished Alumnus Award from the UT College of Fine Arts in 2016. Read more about the archive.

You studied theatrical scene design at The University of Texas, but pursued a career in lighting design after completing your studies. How does this creative shift appear in your archive?

The materials I’ve donated include work from the last 35 years. At the beginning of that period, I was solely a set designer, and that early work is represented in the collection. As I studied work of artists that used light in their exhibitions, I began lighting my own sets using those same ideas and strategies. Work from this period shows small sets lit mostly by different kinds of lightbulbs and fluorescent tubes. There are few traditional theatre instruments used in these early designs as I didn’t know much about them at the time.

A few years later, from 1989 to 1995 there are larger shows that have more complicated scenery and complicated lighting ideas that are straying from the work I was seeing in museums while I was developing my own point of view with lighting. Also found in this work is a better understanding and use of traditional theatre lighting equipment.

By 1996 I moved to New York City and the work from that period is mostly only as a lighting designer, showing a range of sophisticated lighting sculptures and collaborations with excellent set designers. Also in this long period after 1996, I developed a better understanding of theatrical lighting equipment including moving lights and LED technology.

Much of your early lighting design work was done with performance artists like Rachel Rosenthal, while more recently you’ve created a number of major designs for Broadway and Off Broadway productions. How does your experience working on these performance art pieces influence your newer work?

I think working with Rachel gave me a great amount of freedom when designing plays and musicals when I first came to NY. I would often get stuck with an idea for a show and I would re-contextualize the piece and say to myself “Ok. This isn’t an off-Broadway musical; it’s a solo performance piece, what could it look like?” And that often gave me a little freedom to go to new places with a design.

The greatest gift Rachel gave me is that she taught and believed in learning by doing. I worked with her for years lighting her work and I learned how to light while I was doing that. I never studied lighting at all so somehow I learned as I designed over the years.

Are there any collections in the Ransom Center’s holdings that you think your papers will have a particularly strong connection with?

Certainly theatrical set designs by Melziener and Norman Bel Geddes. But I have to say that some of my favorite visual delights are found in the collection. I have often turned to the conceptual ideas found in Ed Ruscha’s self-made photography books and the production design for the Selznick films Gone with the Wind and especially Duel in the Sun have always inspired me as being great examples of ground breaking visual storytelling as well as just being really beautiful to look at.

You count artists like Dan Flavin and Christian Boltanski among your major influences. Can you speak to how you merge their type of artistic creation with stage production?

Flavin’s use of color saturated fluorescent light and Boltanski’s use of clear incandescent light are very clearly found in early work I made as a lighting and set designer, using those ideas to not only quickly define and re-define space in a performance space but also using visible lighting objects as sculptural object when they were used (turned on) as well as un-used (turned off). As I matured and developed my own point of view using non-traditional theatrical lighting, I found newer forms of energy efficient LED and fluorescent lighting that I used in my work.

What are some of your favorite materials in your archive?

There are some color pencil on black paper drawings I made as a student at UT and later in grad school. I think I did those mostly in my free time. I still like those. The set/lighting designs for The Revengers Tragedy (1989), Spirochete (1991) and Richard III (1995) were milestones for me in developing sets that contained multiple layers of non-traditional theatre lighting.

My application in 1992 for a TCG fellowship is pretty much a manifesto indicating where I was headed for the next 25 years or more and speaks clearly about the transition from set designer to lighting designer I was in at the time. The blue CFL lightbulb from Spring Awakening, which is included in the archive, is a great example of something I used on Broadway that makes gorgeous light and is also a unique object to look at.

This is something I used not only in my design work on stage but also to illuminate my home. The numerous items from the original production of Hedwig and the Angry Inch and the club culture from that time are probably some of my favorite items in the collection. Hedwig was probably my favorite show to work on and there are a lot of related materials in the archive, for both the original 1998 off-Broadway production and the 2014 Broadway production.