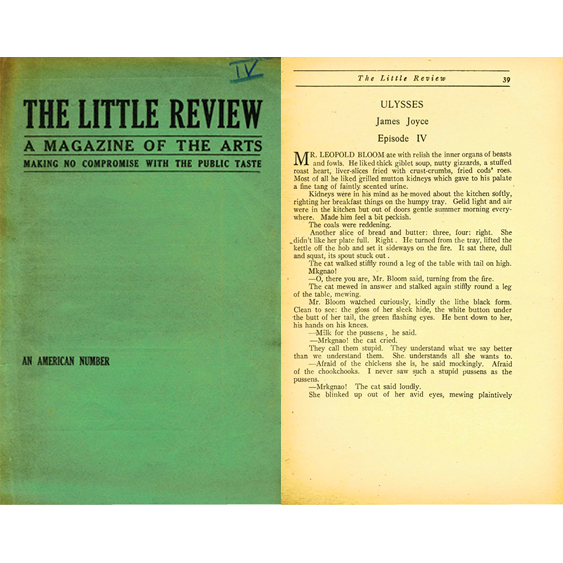 This is the second article in a series devoted to objects that tell the story of women who supported author James Joyce and the publication of his landmark novel, Ulysses (1922). Learn more in the exhibition, Women and the Making of Joyce’s Ulysses, curated by Dr. Clare Hutton and on view through July 17, 2022. Subscribe to eNews to receive all the articles in this series.

Acting as “Foreign Editor” for The Little Review, an avant-garde American periodical dedicated to the publication of Modernist literature and ideas, Ezra Pound encouraged Joyce to submit Ulysses for serial publication in the summer of 1917. Spurred by the promise of regular payment and the encouragement that his work would be published and appreciated, Joyce began to complete chapter typescripts in sequence and sent them to Pound in London for his approval and onward submission to The Little Review in New York.

The editors of The Little Review, Margaret Anderson and Jane Heap, had been enthusiastic about Joyce’s A Portrait of the Artist as a Young Man, and were delighted to have his “new novel,” which they welcomed as a “prose masterpiece” that was “even better than the Portrait.” Thus, the serialization of Ulysses in The Little Review began, in a process which was formative for the writing and reception of the novel.

Readers may think of Ulysses in relation to Dublin in 1904 or Paris in 1922, but the cultural geography of the work’s original composition and transmission to print is rather more dispersed. The finished Ulysses consists of 18 chapters. The last four were completed in Paris, but all the others were prepared for serialization while Joyce was living in Zurich and then Trieste. The first readers of Ulysses were largely Americans who encountered Ulysses in the 23 issues of The Little Review, appearing between March 1918 and December 1920.

The issue of June 1918 was billed as an “American Number,” and introduces Leopold Bloom to the world for the very first time. Heap’s relations with Anderson, her lover, were intermittently hostile and she edited this issue, as an editorial notes, “with no compromise to Margaret Anderson and Ezra Pound.” Regular subscribers had complained about the way in which The Little Review was publishing a “foreign all-star cast.” Heap’s issue is an attempt at redress, and includes work by Wallace Stevens, William Carlos Williams, Amy Lowell, and Djuna Barnes. To see Leopold Bloom appear in this context is to see things differently: readers of The Little Review are a world away from 7 Eccles Street, Dlugacz’s butcher, Molly Bloom being served breakfast in bed, Milly’s letter, and the infamous scene in which Bloom reads “an old number of Titbits” while seated on the toilet.

Ezra Pound objected to Joyce’s “detailed treatment of the dropping feces.” Working on the typescript before sending it on to New York, he insistently deleted the cues which make it obvious that Bloom has gone into the garden in order to empty his bowels in the outdoor toilet. Joyce responded to Pound’s cuts with predictable indignation. He wrongly assumed that it was the New York printer who had “mutilated” his work.

Until January 1920 Anderson and Heap had no direct contact with Joyce. All the arrangements for the Ulysses serialization were handled by Pound. Anderson and Heap, in respect to their attitude to Joyce’s notorious candor, were clearly more liberal and laissez-faire than Pound.

Joyce never visited the U.S. and had little sense that his work was being published by radical lesbian feminists who were committed to free speech, and causes such as anarchism, female suffrage, and non-participation in World War I. He did not fully appreciate the significance of the time, trouble, and risks Anderson and Heap were taking in order to publish Ulysses in The Little Review.

For a wealth of information on pioneering Modernist periodicals see the website of the Modernist Journals Project, which includes a full digital run of all issues of The Little Review in which Ulysses appeared. The serial Ulysses is notably different to that of the 1922 volume version.