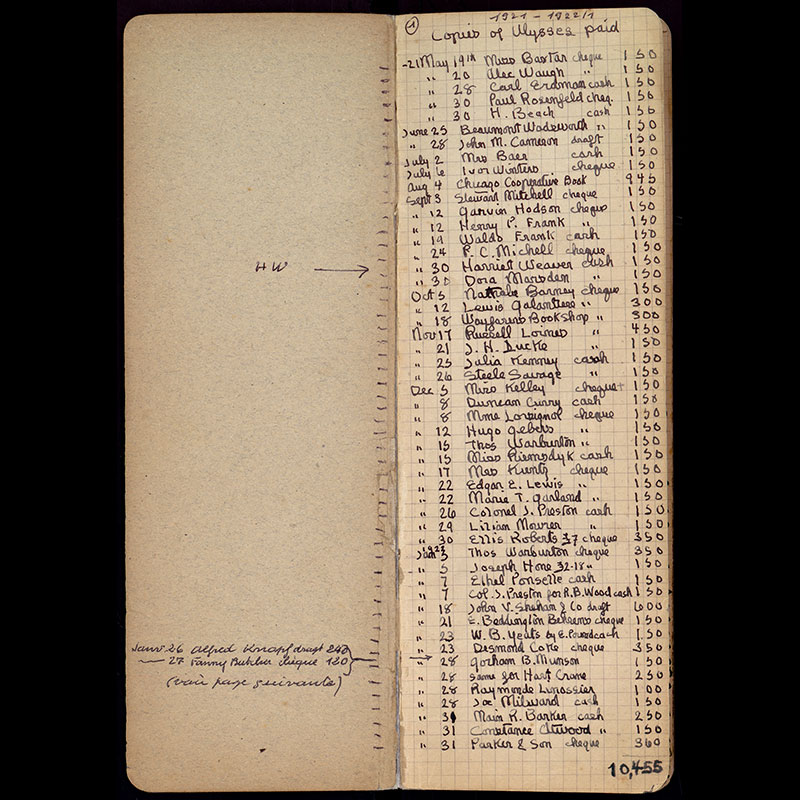 This is the fourth article in a series devoted to objects that tell the story of women who supported author James Joyce and the publication of his landmark novel, Ulysses (1922). Learn more in the exhibition, Women and the Making of Joyce’s Ulysses, curated by Dr. Clare Hutton and on view through July 17, 2022. Subscribe to eNews to receive all the articles in this series.

This tiny ledger, meticulously compiled by Sylvia Beach, records subscriptions for the first edition of Ulysses. It serves as a potent reminder of the necessary administrative labor and organization going on behind the scenes at Shakespeare and Company. Ulysses, issued in a limited edition of 1,000 copies on February 2, 1922, the occasion of Joyce’s fortieth birthday, had sold out by June 15, 1922.  In no small part, this success must be attributed to Beach’s considerable energy, efficiency, and business acumen.

Beach agreed to publish Ulysses early in April 1921 and had drawn up a prospectus by mid-month. She anticipated publication in October, and a book of 600 pages. The completed work ran to 732 pages and publication was delayed because Joyce rewrote and added so extensively on proof pages. The self-imposed deadline for publication on his fortieth birthday was fortuitous, as otherwise Joyce might never have finished rendering the proofs, by his own account, “illegible with interlineations.”

Subscribers were not required to pay until publication, and this first page of the subscription ledger records the names of some who opted to pay in advance. It includes some interesting names, notably Alec Waugh (brother of British novelist Evelyn Waugh); Harriet Weaver and Dora Marsden, editors of The Egoist; W. B. Yeats, who is cited and mocked several times in Ulysses; and Joseph Maunsel Hone, former director of Maunsel and Company, the Dublin publishing firm which had refused to issue Joyce’s Dubliners in 1912.  It must have been gratifying for Joyce to see such names coming in.

Writing to her sister Holly, Beach represents the moment when she agreed to publish Ulysses as one of instant success: “Ulysses is going to make my place famous. Already the publicity is beginning, and swarms of people visit the shop on hearing the news.” But the success of Ulysses was not guaranteed. Subscriptions did not come in that quickly; there were only 260 orders by August 7, 1921.

The reluctance to commit to purchasing the book, sight unseen, can undoubtedly be attributed to price. Signed copies on Dutch paper were 350 francs, $30 or £7/7 sterling; large format copies on French handmade paper were 250 francs, $22 or £5/5 sterling; and “ordinary copies” were 150 francs, $14 or £3/3. As a point of comparison, A Portrait of the Artist as a Young Man was being sold, at the time, for $1.50 or 7/6. These were standard book prices for a hardback novel, and they give a sense of the scale of investment readers needed to make in order to acquire even an “ordinary” copy of Ulysses.

Beach took a considerable risk in committing to Ulysses, and in allowing the extra expense generated by extensive rewriting at the proofing stage. The process did not make her any great fortune, because she gave Joyce a royalty of 66% on the net profits. The publication of Ulysses, however, certainly made her bookshop “famous” as she had predicted, but it did so primarily because she worked tirelessly on Joyce’s behalf.