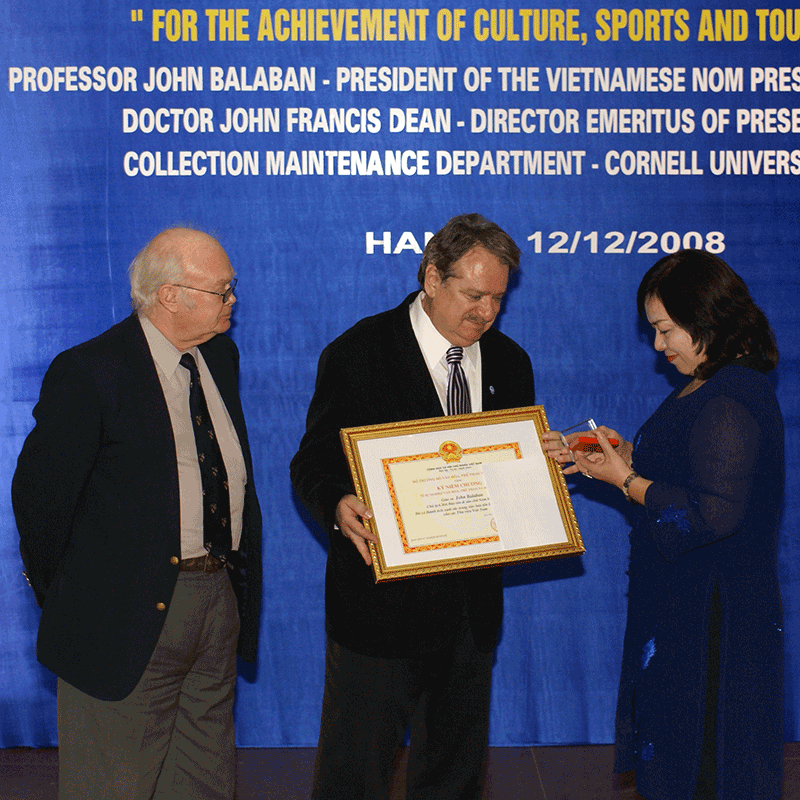 The Ransom Center has acquired the papers of poet, author, and translator John Balaban (b. 1943). Balaban is the author of 13 books of poetry, fiction, and non-fiction. His poetry collections After Our War (1974) and Locusts at the Edge of Summer: New & Selected Poems (1997) were both finalists for the National Book Award. He has received The Academy of American Poets’ James Laughlin Award, a William Carlos Williams Award from the Poetry Society of America, a National Poetry Series selection, and a Guggenheim fellowship, among other honors.

Poet Maxine Kumin noted, “Balaban seems to me to be our moral spokesperson, our lyricist, polemicist, exhorter, and consoler: in short, the poet we need.”

Balaban spent two years in Vietnam as a conscientious objector during the war, doing alternative volunteer service, first as a teacher and later as a relief worker helping war-injured children. He reflected on his experiences in his memoir Remembering Heaven’s Face: A Story of Rescue in Wartime Vietnam (1991).

“From the beginning,” noted poet W. S. Merwin, “John Balaban’s gift for language has been wholly devoted to his need to face directly and mine sense from the bewilderment and anguish being implicated in the history and suffering of our time.”

Balaban returned to Vietnam on a grant from the National Endowment for the Humanities in 1971–1972 to record, transcribe, and translate ancient oral folk poetry known as ca dao. Balaban said of this project, “I gathered love laments, songs about birds and beasts, poems of social protest and social order (usually renegotiating Confucian obligations), patriotic poems, lullabies, courting songs with male and female replies, and children’s game songs. Most of the poems had never been written down before in Vietnamese, much less recorded and translated.” His rare field recordings and transcriptions are included in the archive.

Balaban later translated the work of Hô Xuân Huong—a pioneering eighteenth-century Vietnamese woman whose poetry often challenged traditional male authority—in his book Spring Essence (2000). President Bill Clinton acknowledged this work in a speech he gave in Vietnam in 2000, noting “The 200-year-old poems of Hô Xuân Huong are published in America—in English, in Vietnamese, and even in the original Nôm, the first time ancient Vietnamese script has come off a printing press.”

In 1999, Balaban co-founded the Vietnamese Nôm Preservation Foundation to preserve the ancient Vietnamese Chữ Nôm script and the cultural heritage it documented. In 2008, he was awarded a medal from the Ministry of Culture of Vietnam for his translations of poetry and his leadership in the restoration of ancient texts.

Balaban read from his most recent poetry collection, Empires (2019), at the Ransom Center in March of 2020. His archive enriches the Center’s literary holdings, complementing the papers of many other poets and the Center’s extensive holdings of war poetry and writings about Vietnam.