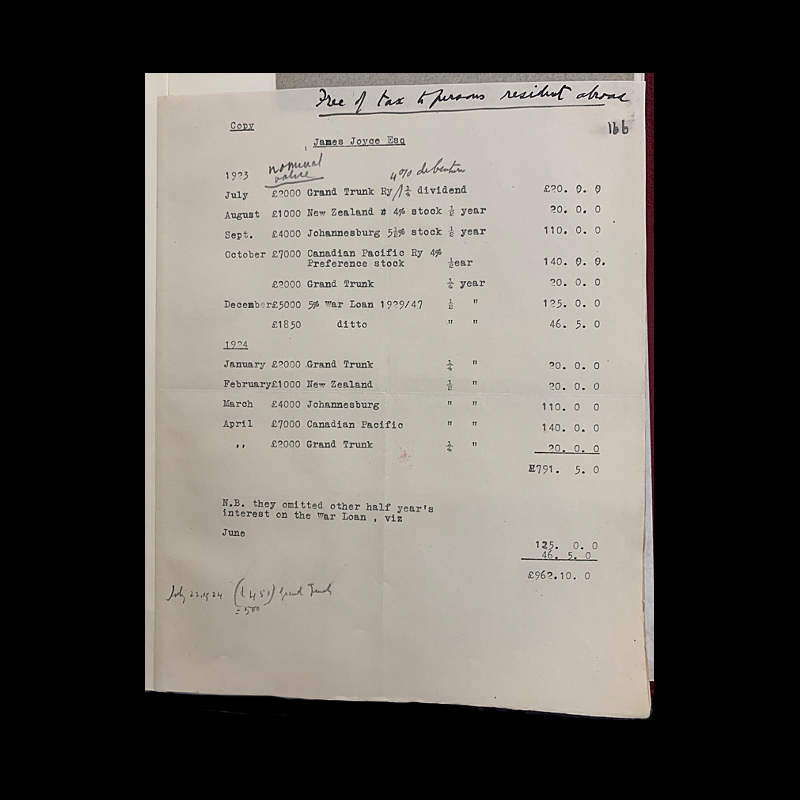 This is the fifth article in a series devoted to objects that tell the story of women who supported author James Joyce and the publication of his landmark novel, Ulysses (1922). Learn more in the exhibition, Women and the Making of Joyce’s Ulysses, curated by Dr. Clare Hutton and on view through July 17, 2022. Subscribe to eNews to receive all the articles in this series.

This single typed page of figures reveals much about Joyce’s income. It is a record of regular amounts paid to Joyce by Harriet Weaver’s solicitors, Monro, Saw and Company, a firm based in London. In sum, it shows that Joyce owned investments to the value of £22,850 in June 1924, when the account was made up.

Until June 1915, Joyce earned an income from teaching English in Trieste. His financial situation became much more precarious when the upheavals of World War I forced a very rapid move to Zurich. As Weaver became aware of the quality of his work and the difficulty of his material circumstances, she began to give Joyce money, including payment for the rights to publish A Portrait of the Artist as a Young Man and Ulysses in serial form, and, from May 1917, regular quarterly payments towards his living costs.

Weaver was born to considerable independent wealth but had moral scruples about unearned income. She wanted Joyce to have financial independence, believing that this would be the best way of giving free artistic rein to his “searching, piercing spirit.” Acting anonymously in May 1919 she gave Joyce an investment of £5000 in the form of a “war loan” that generated a regular income of 5% per annum, or £250.

The exact detail of the financial arrangement here is unusual. In effect Weaver had been one of thousands of small-time investors who had responded to the British government’s appeal for capital to pay the considerable costs of keeping an army on the Western Front. In return she was guaranteed an income from this “war loan” until either 1929 or 1947 (both dates shown on the document, and being the points at which the government could repay the original sum). What Weaver did with the “war loan” was to sign the interest on the investment over to Joyce, in effect giving him a stable income – a certainty expressed in a pithy bit of “war loan” copy (“unlike the soldier, the investor runs no risk”).

Joyce’s exact political views in relation to World War I are not easy to discern, but certainly he did not question the ultimate source of this income. To do so would have been complicated given the fissures that participation in the war caused for Irish cultural and political nationalism. Instead, Joyce buried himself in his work, and there is a clear correlation between the arrival of Weaver’s munificent gift and his decision to write a Ulysses of a much greater length.

Though generous, the money Weaver gave Joyce in 1919 was not enough to cover Joyce’s needs. Dramatic inflation, coupled with serious volatility in exchange rates, followed the war. Thus, Weaver made the decision to follow up with further financial gifts in the form of investments made on the London Stock Exchange, all detailed on this single page, which reveals an income of £962 for the year from July 1923.

With careful choices, this sum could have afforded Joyce a comfortable lifestyle. But he was particularly good at spending, and his children remained largely dependent on him. He drank heavily, ate out on an almost daily basis, lived in expensive furnished apartments within hotels, and incurred significant and unavoidable medical bills.

When financial pinch points arose—and they did so regularly—he drew on the capital invested in his name. His estate was valued for probate at £980 at the time of his death in 1941. Weaver’s estate, valued for probate at the time of her death in 1961 was £17,618, significantly less than the sum she had given to Joyce by 1923. As others have suggested, Weaver did not obviously leave her signature on Joyce’s oeuvre but it is clear that, without her generosity, both Ulysses and Finnegans Wake might never have been completed.