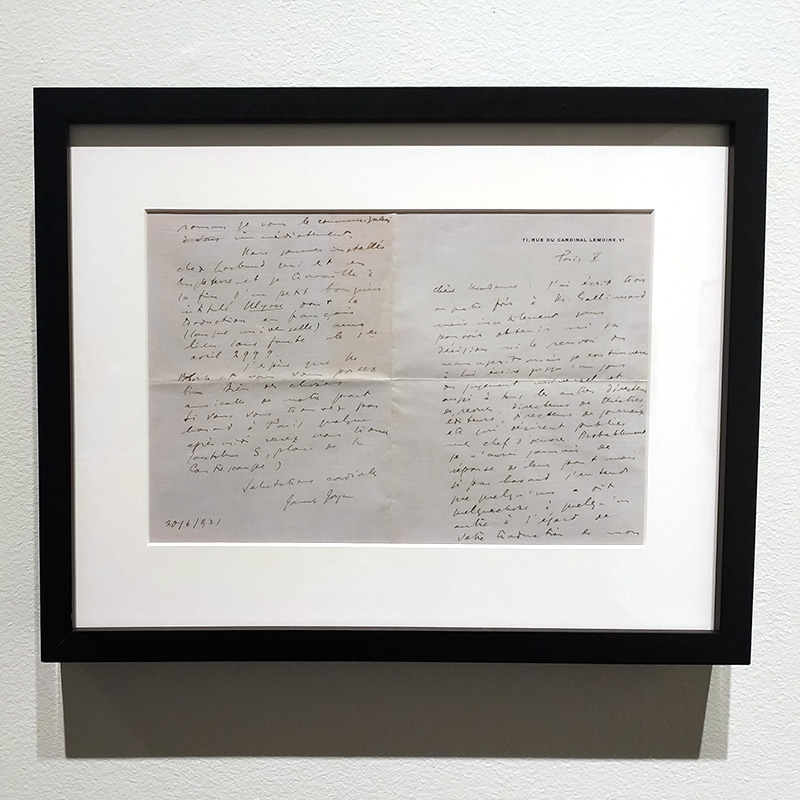 This is the seventh article in a series devoted to objects that tell the story of women who supported author James Joyce and the publication of his landmark novel, Ulysses (1922). Learn more in the exhibition, Women and the Making of Joyce’s Ulysses, curated by Dr. Clare Hutton and on view through July 17, 2022. Subscribe to eNews to receive all the articles in this series.

This is an unpublished letter in French from Joyce to Ludmila Bloch Savitsky (1881–1957) who did much to introduce Joyce to French literary circles by authoring the first French translation of A Portrait of the Artist as a Young Man (Dedalus: Portrait de l’artiste jeune par lui-même (Paris: La Sirène, 1924). Savitsky was an accomplished writer, critic, and translator who could work confidently between English, French, German, and Russian.

Ezra Pound had given Savitsky a copy of Portrait just before Joyce arrived in Paris early in July 1920. Pound was hopeful that she might agree to take on the considerable challenge of translating a work that was daring in its stylistic innovation, and unlikely to bring much renumeration. Not only did Savitsky agree to do the translation she also offered Joyce and his family the opportunity to live in her apartment, free of charge, an opportunity which Joyce accepted with alacrity.

Joyce’s arrival in Paris was initially planned as a stay of three months (“in order to write the last adventure Circe in peace”). In the event he stayed for twenty years and spent the first three months in Savitsky’s apartment on the rue de l’Assomption. Savitsky moved easily within Parisian cultural circles and had been one of the first subscribers to the lending library which Sylvia Beach operated from Shakespeare and Company. She was also responsible for organizing the party at which Joyce and Sylvia Beach met.

Most of Savitsky’s work on Portrait was completed by April 1921, but it proved difficult to find a publisher willing to commit to issuing the work, as this letter suggests. Savitsky was an accomplished translator who also completed translations of work by May Sinclair, Ezra Pound, H. D., John Rodker, and Virginia Woolf.  But Joyce felt that she was slow to translate Portrait and implies so strongly in this letter. Were she to take on Ulysses (“un petit bouquin”, a little book), Joyce quips, it would not be ready until April 1, 2999.

For reasons not of Savitsky’s own making, Portrait took over two years to get published by La Sirène, with whom Joyce signed a contract on August 11, 1921. Joyce eventually recognized that Savitsky had produced an extremely good translation of Portrait. But the experience was alienating for Savitsky who came to see translation as a “thankless occupation” which took her away from writing of her own. Savitsky did not become involved in the translation of Ulysses into French undertaken by a team that included Auguste Morel, Stuart Gilbert, and Valery Larbaud. This took several years to complete and was published in 1929 by Adrienne Monnier, Beach’s lover and the owner of La Maison des Amis des Livres, French language bookshop and lending library, which was also located on the rue de l’Odéon, just across from Shakespeare and Company.

Only half of Joyce’s unpublished correspondence has been published to date.  Of the 3,793 items known to be extant, 1,868 remain unpublished, though this situation is set to change thanks to a new digital edition. Ellmann’s biography, which first appeared in 1959 is more than sixty years old, and is in need of revision. Biographers and editors need to confront the issue of Joyce’s relations with women, particularly those such as Savitsky, who worked so hard to help him find an audience.