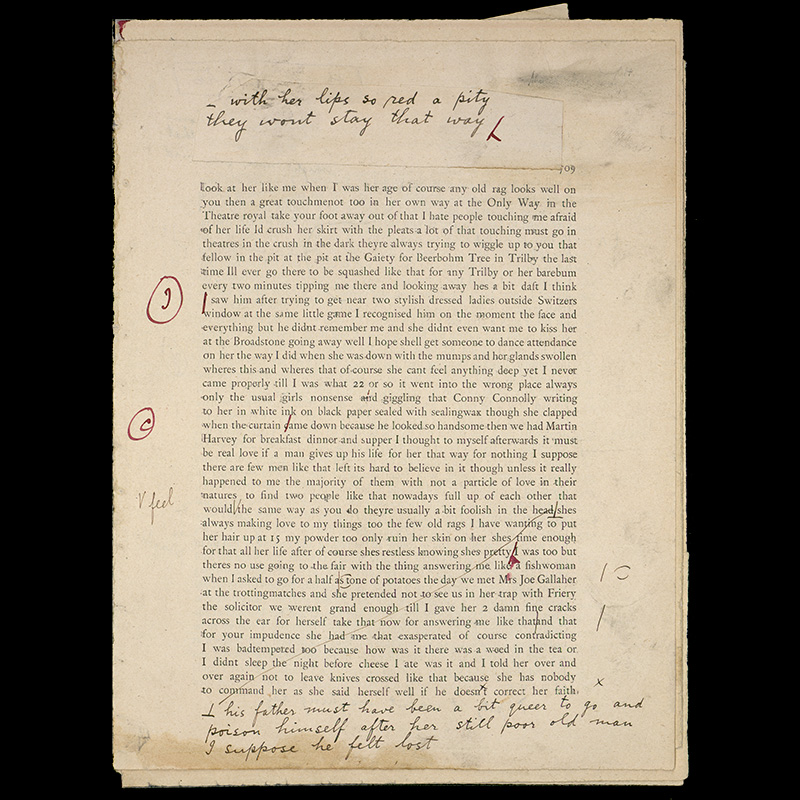 This is the tenth article in a series devoted to objects that tell the story of women who supported author James Joyce and the publication of his landmark novel, Ulysses (1922). Learn more in the exhibition, Women and the Making of Joyce’s Ulysses, curated by Dr. Clare Hutton and on view through July 17, 2022. Subscribe to eNews to receive all the articles in this series.

Joyce was still adding to the text of the final eighteenth chapter of Ulysses less than two weeks before the first edition was published on 2 February 1922. This single page of proof reveals much about the complications of the process. Working in two colors of ink – red and black – Joyce has gone through the text at least twice in order to correct typographical errors, and insert new additions to the text. Notable errors that he catches include “as tone” corrected to “a stone” and “thatand” corrected to “that and”.

In order to communicate a sense of Molly’s fast-flowing stream of consciousness (and her underdeveloped skills in literacy), Joyce has chosen to omit the apostrophes normally used for contractions (in words like she’ll, didn’t, I’d). This makes the text harder to read, and it certainly posed a challenge for Darantiere’s French-speaking printers who knew little English, and had to reverse an established lexical rule. “Doesn’t” appears in the very last line; Joyce catches the “error”, with a tiny ‘x’ in the margin.

This page shows Joyce making two further embellishments to the text. “with her lips so red a pity they wont stay that way” under a pastedown at the top of the page is Molly’s comment on Milly’s looks. The addition at the bottom of the page (“his father must have been a bit queer to go and poison himself” etc.) is Molly’s reflection on Bloom’s father’s suicide, and shows how Joyce continued to add detail to the plot even at the very last stage of the work.  It must have been particularly laborious for Darantiere’s team to reset these pages. The text here, page 709 on proof, is moved to page 717 in the printed edition, a shift which gives a sense of quite how much Joyce added at the very final stage.

One reason he could add so significantly and so freely to the chapter relates to the nature of Molly’s thought process, which is endlessly capacious, passionate and human. This chapter records Molly’s uninterrupted thoughts as she lies in bed next to “Poldy” in the small hours of the morning, reflecting on the eventful day that was 16 June 1904. This page is mainly focused on Molly’s thoughts about her daughter Milly, and thus connects back, in particular, to Bloom’s thoughts about Milly which are vividly depicted in chapter 4. There’s a sense of jealousy and tension between mother and daughter, recorded in little phrases such as “of course any old rag looks well on you then”, and “she cant feel anything deep yet”. Nora Barnacle, Joyce’s life long partner, was a clear source of inspiration for the creation of Molly, and Molly’s relationship with Milly seems to mirror that of Nora’s with Lucia, who was 14 at the point when Joyce was finishing the work, almost the same age as Milly.

Joyce described this chapter as the “clou” or key of the book, and considered it to be “more obscene than any preceding episode”. He was reacting to the legal reception of The Little Review, and upping the ante, a response which is evident on this page in Molly’s candid reflection that she “never came properly till I was what 22 or so it went into the wrong place always”.