We recently sat down with Erica Patricia Saucedo, creator of del corazón nace el enjambre, as well as Angelica Monteiro (Assistant Director), Venese Medovich Alcantar (“Marisma”) and Lizzy Blade (Costume Curator and ensemble), to discuss the upcoming third installment of an exploration of brownness, metamorphosis, self-discovery and identity through movement and the study of what we can learn about ourselves from la cucaracha.

Tell me about del corazón nace el enjambre. What is this piece about?

Erica: del corazón nace el enjambre can be translated to “the swarm is born in the heart,” and it’s a project that is a practice of attuning to “brownness.” This version with the students is the third iteration of this process. The first one is called Metamorphosis – it’s a solo/duet, depending on how you experience it, with myself and Luther Vandross that looks at the question: “what do we need to grieve when we situate ourselves in a state of belonging?” It brings in ideas of citizenship and belonging and, for myself as someone who has been browned and gendered by this world, the idea of citizenship feels very different. To really dive into this process, I had to create a grieving ritual. I took this idea that I might belong to a fixed place – my Mexican identity; my American identity; my identity as a woman – and took that fixed state and maybe treated it like it’s a myth. Maybe these fixed identities that were created for me were just stories.

The next iteration, Cucarachicxs, features a host of artists – Bonnie Cox, Angelica Monteiro, Sarah Annie Navarrete, Ále Acevedo, Walter Nichols, Kelsey Oliver and Chris Conard. We wondered how the cockroach, la cucaracha, as both a cultural and literary figure and as a creature might help us attune to brownness. It was really fun to be with cockroaches and talk about all of the connotations that they have – both on their own as one of the most detested creature you can imagine, and then also on their own as one of the most resilient creatures. We pulled in cultural iterations of la cucaracha and those associations from the Americas. There’s a lot of stories of those who have been called “la cucaracha,” like the song La Cucaracha which is about female soldaderas. We looked at those stories and what they have to teach us about being brown. We also generated movements from the movements of cockroaches and imagined ourselves as cockroaches. We built from this question of “what does it feel like to be a problem?” and then “How might that ‘problem’ you’re targeted for be one of your greatest superpowers?” 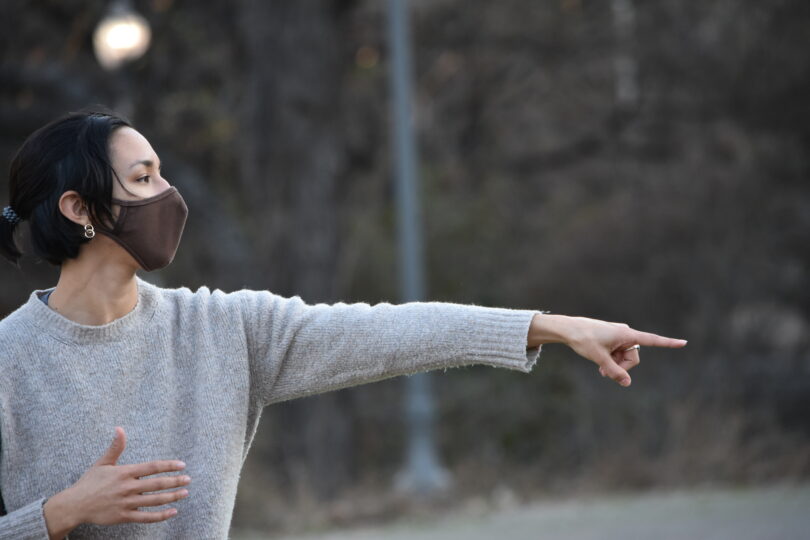 Were any of you part of the earlier iterations of this piece?

Angelica: I was in the second [iteration of this piece] as a performer and collaborator in addition to this third one where I am Erica’s assistant, so now I get to see the production side of the piece.

Lizzy: I’m only in this third iteration as a student – I’m doing mostly costume curation. At the beginning we were all part of the process and then we narrowed [our scope] to a specific area of focus, so I’ve been working with dancers and curating costumes and interactive elements.

Venese: I was not. I viewed the second iteration and I was definitely inspired, particularly by the setting of dirt that they’re moving in, and the contrast of the clean, sterile white that they’re performing on against the dirt. There’s a section in this third iteration where I’m definitely pulling from that inspiration. [In this iteration] I play “Marisma,” and she is [part of] a non-linear narrative, so I’m representative of past, present and future. I’m like the mother of the cockroaches, but my role throughout this piece, outside of that character, has been in dramaturgy. This piece is so rich; there’s so many intricacies and so many layers. Erica gave us so many entry points to start to play off of and to live in – everything from the female soldiers and Mexico and South America; the grieving of “home” and the taking of home and territories. There’s just so much, so the opportunity to be able to dive into it and to gather and to learn, because there’s a lot of learning, and then finding the connected parts and the influences has been a really rich experience.

Angelica – as someone who has been part of earlier iterations of this work, what do you think has carried over from those other versions?

Angelica: I was thinking about that earlier actually, and I feel that in the beginning the work was [more] concentrated into three bodies that were performing. The concept we’ve used in the third part – of shedding – I feel that we’ve shed and we’ve multiplied. We originally had [three dancers] together and now we have this whole community. This second part feels like we’re building an army of cockroachs, and it’s getting bigger and bigger and I love that. I think that’s what I bring from the second [iteration] to the third – this really strong sense of community and that we’re marching together towards a bigger goal and responding to this somewhat abstract question of brownness and how brownness fits and feels and exists in the world. 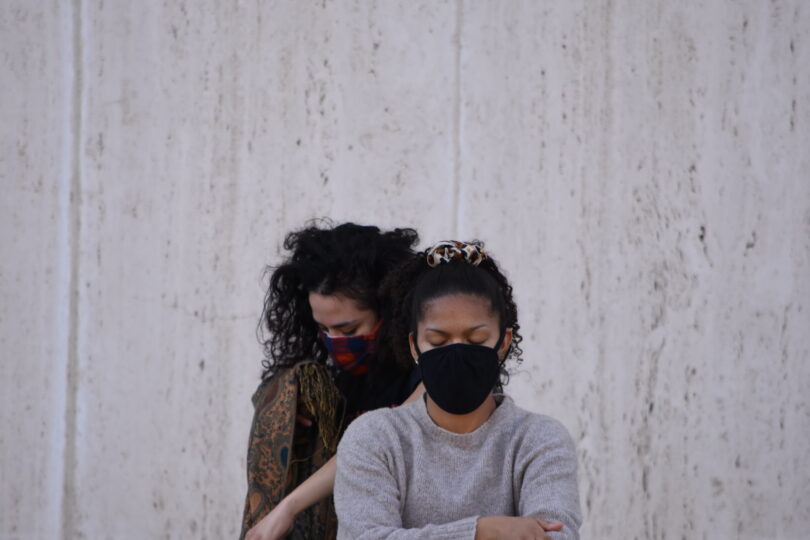 In working within this methodology, how has your perspective shifted from being a dancer in the earlier versions to being more involved as an assistant director? Has that changed your connection with the themes of the piece or how you’ve interacted with it?

Angelica: I’ve been through the process of feeling it in my body with the ideas that Erica was putting forward, and now I am helping others feel that. And when I say others, it’s not just the dancers, but also the people who will watch those dancers, and it will multiply because each dancer has their own microworlds and connections and the piece will reach out to more people.

Lizzy – what was the process of curating costumes for this work? What did that entail?

Lizzy: Before this process I had only done minor [projects] in wardrobe and costuming. So we started by creating a mood board – [with everything from] textures to actual pieces of clothing to things that you would see on the runway, and then from there we had conversations with different dancers that we were specifically going to be dressing, and built from there. So ultimately we’re still in the process of making adjustments to make sure the dancers feel comfortable and fully heard and expressed physically through what they’re wearing. 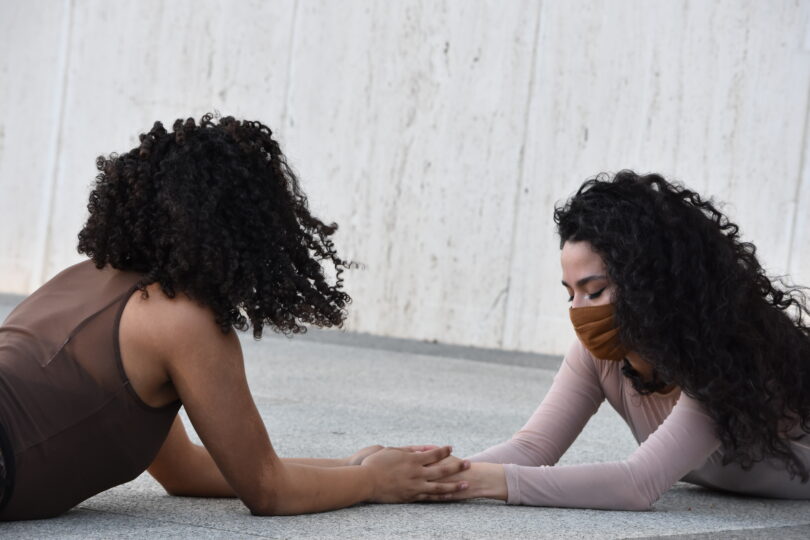 Venese –How did you tackle dramaturgy for del corazón?

Venese: There’s so many layers and they’re all speaking to each other. I think that was the most beautiful aspect of this entire work is that it’s so reliant upon community. There’s been a lot of research finding the connections between things and the prompts we’ve been working with have been informative on how people have experienced the information brought to the collective conversation. It’s been really interesting.

How was that information shared with the community? How did the rest of the team engage with that content?

Erica: There’s this idea of emergent dramaturgy; everyone actually being a dramaturg. In the very beginning, we had two weeks of sharing readings with one another and I would bring as much foundational research and references from previous iterations as I could. And then we would just have conversations: what are the textures? What are the energies? What are the images that are coming up? What are the stories in our personal lives that are coming up? It’s pretty wild because it feels like it keeps opening, but I’m really excited to share with the whole team the actual footage that we edit together because I don’t think we all know what the thing is yet. As the director, I get to receive all of this information and all of these edits and put my final lens on top of it. So Lizzy’s stories and Venese’s stories and Angelica’s stories are seen through my eyes in the end, but I’m trying to make a commitment to listen to everyone’s stories when I do that. 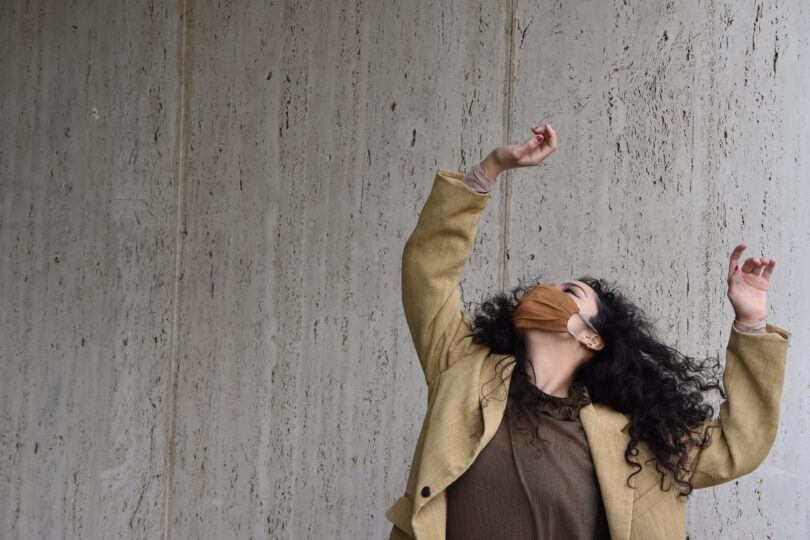 How much of the movement is improvised and how much was choreographed?

Erica: So I would say it’s kind of 50/50. In the early embodiments I would assign these weekend prompts where we took our improvisation and any reflections that felt really grounding and then I would put a movement score together and asked the dancers to film themselves. So then we had these three textures that are our chapters for taking the audience on this journey with us. So we have stains, we have white walls and we have dirt – that content is our choreographed material. And then everything else that you’re watching is improvisational.

What was it like working with movement research and educational materials as part of this process?

Venese: We had watched a video, I think it was like our second day, and it was José Feliciano  singing the national anthem [in 1968]. And it was not received well by the general public – which the majority of the general public, specifically at that baseball game, was white. His career really took a turn and so there was a lot of information that we looked into and a lot of questions surfaced: Why wasn’t it received well? And how does that make you feel? How does that sit with you? And from there we would focus on a score. So it was open and improvisational, but Erica had very specific goals for these prompts that created continuity. It was really beautiful because we were given these prompts and scores, that we were to work on over weekends and then we put that content into a Google drive and we would see everyone’s work and their interpretations – little differences, but there was still a common thread running through. That became a way of knowing we were tuned in; we knew we saw each other.

What excites you most about this piece? What are you excited to share with an audience?

Venese: I’m so excited. We’ve (the cast) seen sections of it and in that way we’ve lived it in a non-linear way, but [the finished product] is like a surprise because it’s still coming together. It feels like we’re tightening that thread, drawing the needle through and it’s coming together and that’s really exciting. 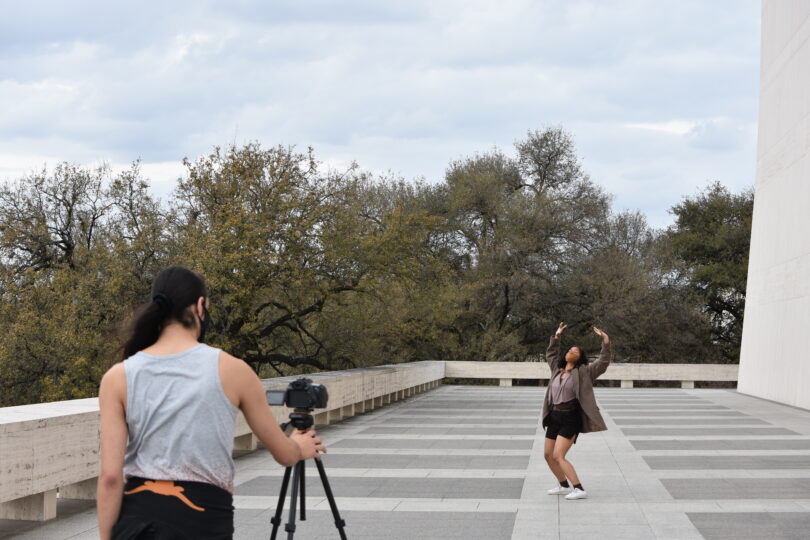