Rediscovering the Magic of In-Person Theatre with COMMUNITY GARDEN

Posted on June 8, 2021 by Sydney Pattillo Posted in Beyond the Stage, On Stage

On April 27, 2021, a small group of audience members found their seats, actors carried out their pre-show rituals and technicians prepped their starting cues as they waited for the curtains to rise on the UTNT (UT New Theatre) production of Community Garden. In this shared space, however, there would be no curtain or house lights to signify the start of the show. Masked audience members sat spaced out in folding chairs facing a lush garden rather than a stage. What connected them was a shared excitement at witnessing the magic of live theatre. It was this magic, complimented by the already supernatural elements of Renae Simone Jarrett’s script, that pushed the production team, cast and crew of Community Garden through a unique and sometimes tumultuous rehearsal process, bringing to fruition UT Theatre and Dance’s first in-person performance in over a year. 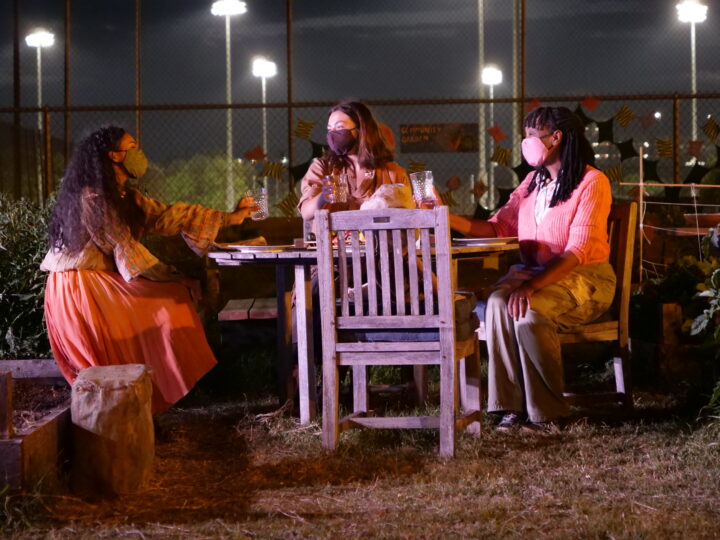 For a play like Jarrett’s Community Garden, magical elements influence every aspect of the storyline. Centered on a woman who stumbles upon a beautiful garden and the witchy group of women who tend it, Jarrett’s play uses spiritual and supernatural elements to meditate on self-searching and sacrifice. Working with a piece that is so reliant on its garden location, she and director Kristen Osborn started plotting ways to incorporate natural elements into their production.

Struck by how integral the garden was, Osborn wondered “What if we did this play outdoors in a garden, and we actually let the garden be a character in this play that is completely real?” When she mentioned this to Jarrett, both artists became increasingly excited at the prospect of presenting this new play as a site-specific, in-person performance. Armed with approval from their playwriting/directing mentor KJ Sanchez and the promising statistical evidence against COVID-19 transfer outdoors, Jarrett, Osborn and stage manager Rachel Aston Warren set out to find a garden fit for their production. 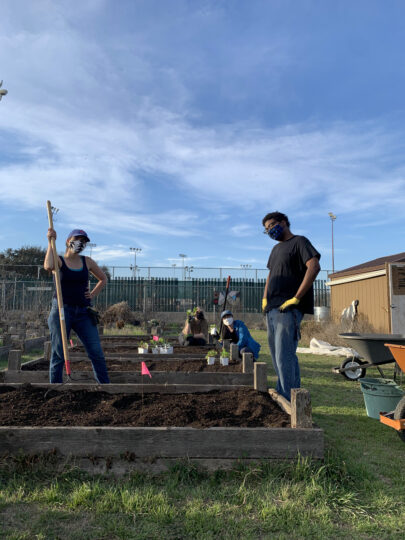 The Campus Environmental Center Microfarm – Whitaker Courts, located North of UT campus, provided fertile ground for a developing play set in a lush garden environment. Shortly after the February freeze, the production team got started growing their set. Garden consultant Sally Jung joined the team, bringing with her a wealth of gardening knowledge as they began nurturing new life out of previously frozen soil. Jung’s expertise on plants that thrive during Texas springs, as well as hours of tending by the production team and even fellow classmates (M.F.A. candidate Braxton Rae could often be found helping out), produced full, healthy plots in a matter of weeks. “[The plants] grew at an exponential rate,” Jarrett shared, “it was really beautiful to watch and really fulfilling.” Perhaps more fulfilling was knowing that those fruits and vegetables harvested from the garden would go to the UT Outpost, a food pantry designated for UT students, faculty and staff. As the team witnessed these plots grow from tiny seedlings to sturdy, fruit-bearing plants, they were also busy nurturing Jarrett’s script and watching it grow into a fully realized production.

The Campus Environmental Center Microfarm before and after Community Garden.

With the garden location secured, the designers quickly adapted their theatrical know-how to fit the outdoor space. Without a reliable power source on location, the team brought in their own generator to run the lights and soundboard, paring down their initial design plans to fit their limited power source. Lighting designer Alyssa Finger used 10 lighting fixtures to play off the natural setting of the sun, letting more theatrical lighting seep in when building up to the climax of the play, which took place at night. Sound designer Alex Titsworth trimmed her cue list down, punctuating particular moments with sound to add to the magical, natural feel of the piece. These elements complimented the costumes, designed by Court Rogers, and prop pieces created by Carolyn Hardin. Hardin also developed practical effects that enhanced the growth of the garden, incorporating prop strawberries on a pulley system that would pop out of the earth, signifying the passage of time as the play progressed.

An unorthodox rehearsal process mirrored Community Garden’s unique presentation. Three weeks of Zoom rehearsals and a virtual reading between week-long pauses to accommodate a shifting performance schedule provided the actors with ample time to become familiar with the text before moving into the space. Jarrett churned out adjusted pages of her script each day, while Osborn and assistant director Nikki Hammond utilized a ground plan to map out blocking with the actors before they had access to the garden. One week of rehearsal in the space was spent solidifying blocking and adjusting for giant holes and anthills before layering technical elements over the piece. Tech rehearsals saw hours of running and re-running the play, battling against time in order to line up certain scenes with the setting sun. Masked designers and crew operated lighting and sound from fold up tables positioned behind strategically spaced chairs for audience members. Rainy weather threatened the prospects of a full week of performances, but rain delays didn’t stop the team from working their magic within their garden space.

The real magic, however, took place within the community that was built in-person and outdoors. The holistic approach of planting their set and growing it into existence fortified a strong connection between collaborators – one that was greatly missed after months of remote theatre-making. For some students, this would be among their first face-to-face interactions with fellow UT Theatre and Dance artists. 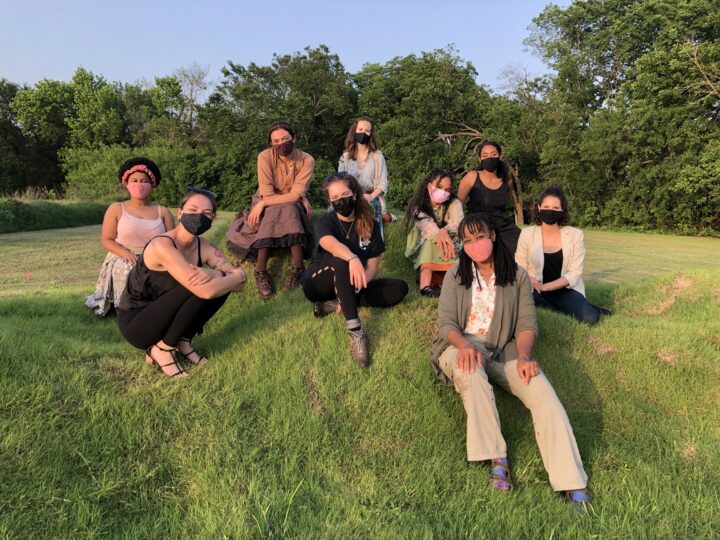 As the performance on April 27 drew to a close, a masked actress handed audience members freshly-picked leaves of Swiss chard, sharing with them the reaped harvest of the production team’s creation. For an hour and a half, these creators welcomed a small audience into their built community, harnessing the magic of live theatre in a space ripe with creative potential. These small pieces of greenery carried with them feelings of new growth and hope as theatre-makers and viewers parted ways after sharing the same space once again.