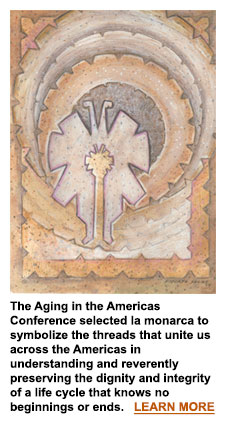 Please click here to find more information about findings from the 2013 ICAA in Challenges of Latino Aging in the Americas edited by William A. Vega, Kyriakos S. Markides, Jacqueline L. Angel, and Fernando M. Torres-Gil.

The 2018 meeting was the 17th installment in the conference series. Past conferences examined the social and economic causes and consequences of health problems among older Mexican-origin individuals in the United States and in Mexico. CAA’s investigators and advisory team lead the conference each year with the generous support of grantees, sponsors, and partners. The CAA Mentoring Program offers a unique opportunity for emerging scholars to participate in a juried poster session and engage with expert researchers on issues related to their field of study.

Over the last seventeen years, the Conference Series on Aging in the Americas has brought together leading and emerging scholars in order to develop a critical mass of theoretical and practical work aimed at expanding our knowledge concerning the causes and consequences of population aging in the Americas. The first meeting was held at The University of Texas at Austin in 2001, and has since been followed by ten additional conferences, all of which were convened during National Hispanic Heritage Month and close to Mexico’s Independence Day. The overarching goal of the conference series is to address vitally important issues that affect not only the Hispanic population of the United States, but also those of all Latin American nations in which the demographic transition that took a century or more in Europe is occurring in just a few decades. In Mexico, this transition has immediate practical implications for both that country and the United States. New policies dealing with education, health care, housing, transportation, and more will be necessary to deal with changing population age compositions.

The International Conference on Aging in the Americas (ICAA) series has three major aims: 1) to facilitate the exchange of ideas aimed at addressing key issues confronting aging populations in the Americas; 2) to promote an interdisciplinary collaboration between researchers in the fields of Hispanic health, health care policy, and behavioral, and social aspects of aging; and 3) to set a research agenda for understanding and improving the health and well-being of older Latino adults and their families throughout the Americas. One of the many attractive aspects of this conference series is that it supports interdisciplinary collaboration on state-of-the art research concerning Hispanic health and aging. The series has a logical and sequential order that aims to build upon the work of each presenter through the integration of knowledge, interest, and research findings on substantive and methodological issues.

Each installment in the series has a unique and individual signature theme, but follows a similar format. In the last three installments, topics covered the methodological problems of conducting cross-national comparative studies in the context of Mexico and U.S.; implications of changing demographics in Mexico for Mexican-origin health and economic well-being; and research designed to improve understanding of the influences of the immigrant family experience on Hispanic (Mexican-origin) healthful aging. Each meeting lasts for two days and consist of 2 keynote presentations, 10 panel presentations, and a poster session. There is a consensus building session at the end of each conference where participants review key issues raised during the conference and identify new directions for research.