Last month, library Twitter, as well as other information professions and their platforms, was taken over by news and debates surrounding a controversial decision by the National Archives and Records Administration to alter photographs of the 2017 Women’s March in a public exhibit. In this blog post, we’d like to talk a little bit more about why this conversation is important and why it has so many information professionals speaking out against the decision.

The National Archives and Records Administration

The National Archives’ stated mission is to provide public access to government records. This enables Americans to understand the country’s history as well as hold their government accountable. In fact, the stated values of the archives include providing information that can “transform the American public’s relationship with their government.”

The current controversy began on January 17, 2020 when The Washington Post published an article stating that the National Archives censored images displayed in an exhibit entitled Rightfully Hers. The exhibit, which was open to the public, juxtaposed two photographs taken almost a hundred years apart. The first photograph displayed a 1913 women’s suffrage march in Philadelphia. The second photograph showed an image of the 2017 Women’s March in Washington D.C. In the Washington Post article, journalist Joe Heim noted that portions of the 2017 photograph had been deliberately obscured, reporting:

In the original version of the 2017 photograph, taken by Getty Images photographer Mario Tama, the street is packed with marchers carrying a variety of signs, with the Capitol in the background. In the Archives version, at least four of those signs are altered.

The altered signs blurred out the name Trump in phrases such as “God Hates Trump,” and “Trump & God – Hands off Women,” preventing viewers from viewing the full historical document. In addition to the concealment of Trump’s name, words associated with the female anatomy like “pussy” and “vagina” were also hidden by the federal agency. The day after The Washington Post published the article online about the exhibit, the National Archives took down the controversial display.

Shortly after taking down the exhibit, the National Archives released a series of tweets apologizing for the decision to alter the image. 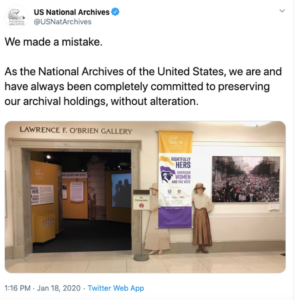 The institution stated that the 2017 photo was not one of their archival records but instead one they had licensed as a promotional image. Nevertheless, it was the National Archives’ decision to alter the image, not the owner of the photograph. The current Archivist of the United States, David Ferriero, went on to write on the National Archive’s blog:

We wanted to use the 2017 Women’s March image to connect the suffrage exhibit with relevant issues today. We also wanted to avoid accusations of partisanship or complaints that we displayed inappropriate language in a family-friendly Federal museum. With those concerns in mind, and because the image was not our archival records, but was commercially-licensed and used as a graphic component outside of the gallery space, we felt this was an acceptable and prudent choice.

In response to the National Archives’ initial decision, the American Library Association commented:

It is a fundamental tenet of librarianship that any alteration, deletion, or editing of materials held by a library or archives because of a fear of controversy or because of partisan or doctrinal disapproval is an act of censorship that all information workers are called upon to resist. Removal or alteration of archival materials, if done to conceal truthful material about past persons or events, constitutes an unacceptable erasure of the historical record that impairs our ability to provide accountability for the past, change the future, and acknowledge the truth of our different perspectives and experiences.

Obscuring archival documents not only violates the ALA Library Bill of Rights and Expurgation of Library Resources, but also results in historical erasure, breeds a loss of credibility with the public, and disassociates the institution from democratic values that focus on freedom of assembly and speech.

The unaltered photograph provided historical evidence of women’s existence, voices, and perspectives. Though the National Archives intended to connect recent events with the historical trajectory of the Women’s Rights Movement, the blurring of any part of the image erases part of the story and, in doing so, obscures the voices and perspectives of the women involved in the 2017 march.

Moreover, the alteration went against the National Archives’ purpose of reflecting history in a non-partisan, non-biased way. Alteration of a historical document is by nature a biased and biasing act.

Preserving records and managing access to public and government documents requires commitment and integrity. In the words of ALA Bill of Rights (Article II):

Libraries should provide materials and information presenting all points of view on current and historical issues. Materials should not be proscribed or removed because of partisan or doctrinal disapproval.

The alteration of the image prevented the public from seeing history as it actually occurred. Historians, archivists, curators, and librarians have a responsibility to preserve history and peoples’ stories while upholding the value of documents and artifacts by protecting their authenticity.

As you can imagine, voices on twitter had much to say on the matter, including this thread by historian and history professor Karin Wulf. 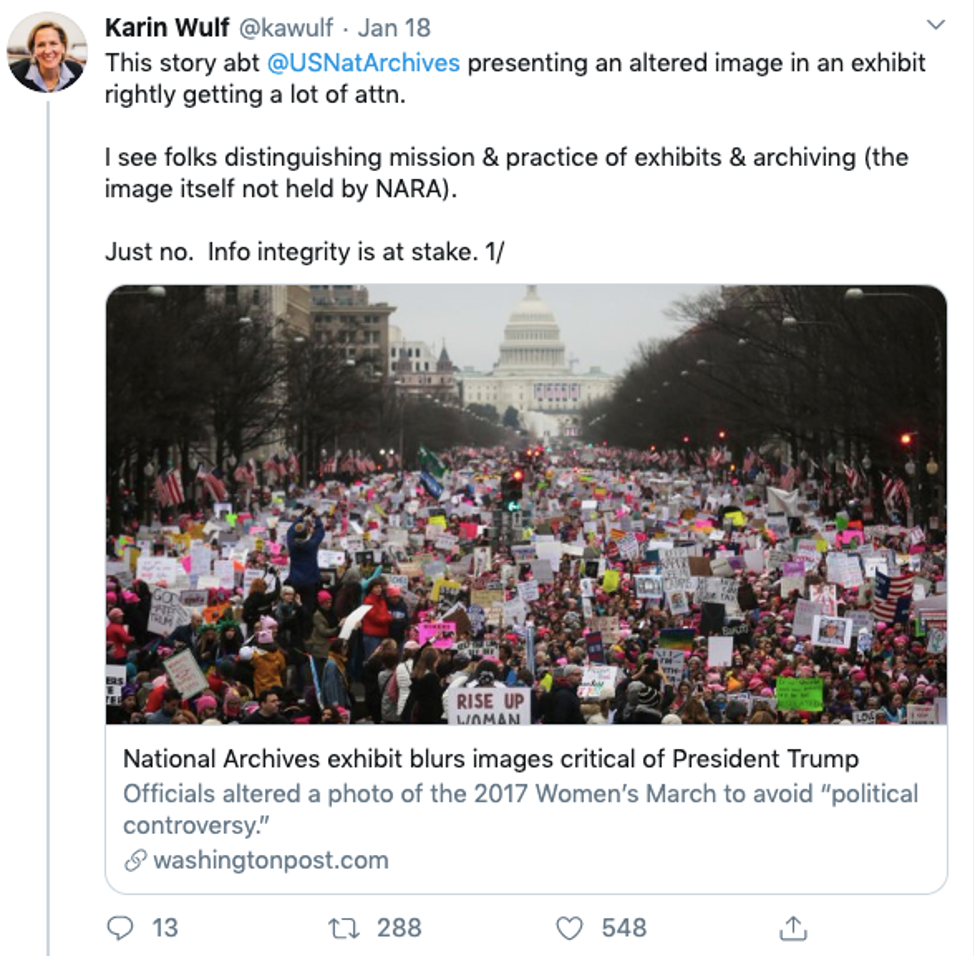