Wildlife Crime and the Rule of Law

Though often seen as an environmental issue because of its degradation of species populations, wildlife crimes such as poaching and trafficking have ramifications beyond immediate threats to biodiversity or environmental health.  Wildlife trafficking also threatens national security and can undermine the rule of law.  Though the concept of “the rule of law” can be difficult to define, it generally relates to the ability and willingness of states to enforce laws fairly.  States with weak rule of law are prone to corruption and ineffectual legal systems, which makes them prime sites for the acquisition, transport, and/or sale of illegal wildlife materials. 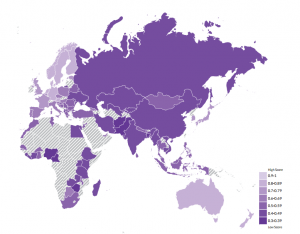 A selection from the World Justice Project’s 2014 Rule of Law Index. Countries in lighter shades of purple received better rule of law scores than those in darker shades.

At the 2012 meeting of the United Nations General Assembly, wildlife crimes were recognized for the first time as serious threats to the rule of law around the world.  Since 2012 the Obama Administration has also increased efforts to elevate wildlife crime’s place on the global security agenda by highlighting how the growing sophistication and militarization of organized wildlife crime undermines the safety of people as well as animals.

“Trafficking relies on porous borders, corrupt officials, and strong networks of organized crime, all of which undermine our mutual security.”

Present-day poaching and trafficking often involves high-power weaponry, with deadly consequences for humans as well as animals.  For example, park rangers tasked with protecting animals in African countries have come into the crosshairs of poaching operations as poachers gain access to stronger weaponry to achieve their goals.  High demand for illicit wildlife materials helps make wildlife crime an attractive enterprise, but another factor is the perception of low risk.  Many states struggle to protect wildlife resources from poaching or prevent trafficking at their border entry points.  If pursuing traffickers is low on a country’s policy priority list to begin with, it becomes even easier for criminals to flout whatever restrictions may exist.  The increased use of deadly force on the part of poachers also indicates that they are willing to violate other laws in order to attain the profits promised by illicit wildlife trade.  This lack of security then undermines the effectiveness of law enforcement in affected regions, contributing to a cycle of weakening the rule of law and then taking advantage of its weak state.

A number of multilateral regimes to tackle wildlife crime have been developed over the past few decades.  These initiatives recognize how wildlife trafficking involves multiple countries from the point of poaching to the point of purchase.  However, they have not always been effectively implemented.  Although the Convention on International Trade in Endangered Species (CITES) has been signed by approximately 180 countries, these countries are tasked with developing their own domestic laws in order to uphold CITES requirements.  Some entities, like the United States and the European Union, may institute and enforce stricter regulations than those specified by CITES.

But depending on the strength and effectiveness of an individual state’s institutions, these laws may not be strongly enforced even if they are strong on paper.  Earlier this year the law firm DLA Piper released a report reviewing the implementation of CITES in ten countries, including Kenya and China.  They found that many countries’ legislation related to wildlife crime was outdated and did not treat wildlife crime as seriously as similar trafficking crimes.  A common problem was that when criminals were apprehended, they were not formally prosecuted through the judicial system.

These gaps in CITES enforcement create a collective action problem: international efforts like CITES can only work if all the links in the international chain are strong.  If a country does not properly uphold its part of these multilateral regimes then it can become a point of exploitation for wildlife traffickers.  This patchwork of anti-wildlife trafficking legislation throughout the world could be unified if countries could model their legislation on other countries, or perhaps a universal CITES template.  Meanwhile, a way to improve the enforcement of wildlife-related laws is to support increased capacity for countries that lack the resources necessary for robust enforcement.  Programs such as regional wildlife enforcement networks (WENs) allow countries to work together on cross-border issues and share data and information.  Wealthier countries can also provide support through international aid.  This can take the form of monetary or material resources, as well as providing training to law enforcement officials in key wildlife trafficking countries.

The global problem of wildlife trafficking is tied to the more domestic issues of good governance and the rule of law.  These domestic problems with individual states have spillover effects into the security of citizens in other states who are affected by transnational criminal activity.  Although this may make wildlife trafficking seem more difficult to tackle, it also suggests that reframing wildlife conservation as an aspect of national security could help make it a higher priority among the world’s governments.  Good governance is crucial to reigning in illegal wildlife trafficking and poaching, as well as trafficking in other commodities like drugs and weapons.