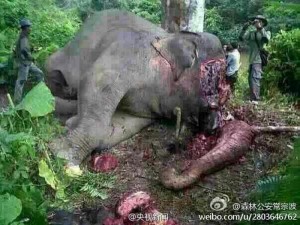 Chinese ivory demand is as large as it is famous. China has been accused of driving the dramatic increases in elephant poaching in Africa, with more than 30,000 elephants killed per year for their ivory. A less known fact is that China itself is home to over 250 wild elephants, a population that seems to be on the rise through reproduction and immigration of herds from Laos. Moreover, despite isolated poaching cases—such as the recent discovery of a beheaded and de-tusked elephant in China’s Yunnan province—Chinese authorities seem to have implemented relatively effective domestic policies to limit the threats to these endangered animals. As NYT’s Andrew Jacobs writes, “perhaps the best place to be a wild elephant is […] in the tropical forests of southwest China.”

China’s elephants can be found in a fragmented 2,500 km2 range in the south of Yunnan province, near the border with Burma and Laos. This range is part of the Xishuangbanna and Nangunhe Natural Reserves, which although abundant in fodder, are also densely populated. Human-elephant conflicts are common, since the isolated elephant patches are located among extensive areas of tea and rubber plantations, and croplands that increase year by year. In fact, it is habitat loss—not poaching—the gravest threat to Chinese elephants.

Official statistics calculate that between 2005 and 2013, wild animals in Yunnan caused 1,324 deaths and US$67.3 million of property losses. To limit human-elephant conflicts, the local government has already relocated nearly 300 households out of core protected areas. Also, authorities have tried compensating farmers for their losses to elephant grazing and stomping, with payments that reached almost US$680,000 in 2012. Farmers argue, however, that these funds are not enough to cover the market value of their lost crops. Another joint effort by Chinese authorities and environmentalists has been the creation of “elephant canteens”. One 642-acre feeding ground, for example, has been set near Yunnan’s Pu’er City, stocked with bananas, bamboo and a water pond. The objective is to prevent human-elephant conflict by providing elephants with enough to eat at a safe location away from human settlements. The effects of this program have yet to be evaluated.

At the national level, the Law of the People’s Republic of China on the Protection of Wildlife (adopted in 1988) lists the Asian elephant as a first class protected wildlife specie. In its Article 31, this law states: “Anyone who illegally catches or kills wildlife under special state protection shall be prosecuted for criminal responsibility.” Until three years ago, those involved in elephant poaching in China faced the death penalty, making China’s Criminal Law among the strictest legislations to combat domestic poaching. Others also point out the benefits that the “growing affection among middle-class Chinese” towards elephants has brought to their conservation. Tourism officials in the region have embraced elephants as an “irresistible marketing mascot.” Anti-ivory trade public campaigns, like those led by WildAid, have probably also contributed to the widened awareness of elephant protection.

Given the progress made by Chinese authorities to protect China’s elephant population, is it possible to think of ways in which China could become a bigger player in international conservation efforts? Could Chinese domestic elephant protection mechanisms and public opinion trends be used as a base from which to call for China’s assistance in combating elephant poaching in Africa? Could China’s experience implementing elephant protection legislation be transferred to other areas, such as combatting illegal wildlife trade or demand reduction strategies?