The Future of Operation Crash 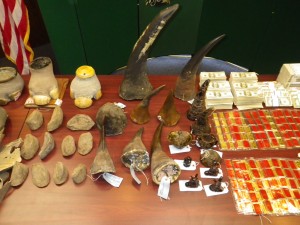 In 2011, the U.S. Fish and Wildlife Service’s Office of Law Enforcement formed Operation Crash, which investigates rhino horn and elephant ivory trafficking consisting of “all aspects of U.S. involvement.” Operation Crash is also an interagency investigation, as FWS works with the Department of Justice in investigating and prosecuting these suspects.

With enforcement support from 40 U.S. states and 10 foreign nations, federal investigators have taken down several sophisticated, international criminal networks, and their investigations continue.  Defendants have been convicted of numerous offenses, including conspiracy, smuggling, money laundering, and bribery, are receiving significant jail terms, and have already forfeited millions in illegal wildlife, gold bars, luxury vehicles, and currency.

The first phase of Operation Crash investigated illicit purchases and trafficking from the United States, which led to 15 arrests and nine convictions. These arrests include:

Zhifei Li: On January 2013, Zhifei Li, a Chinese national and an antiques business owner, was arrested for purchasing a rhino horn set for $59,000 in Miami, Florida. On December 19, 2013, he pleaded guilty for his involvement in ivory and rhino horn trafficking from the U.S. to China. Li was involved in a black market network and assumed leadership role amongst his accomplices. In total, his network engaged in the trafficking of 30 rhino and elephant products, which amounted to over $4.5 million.

Although demand markets for wildlife, including illegally-traded wildlife are present throughout the world, China ranks as the world’s largest market for illegal trade in wildlife, and wildlife products, followed by the United States.

While this report is from 2011, the aforementioned quote highlights that the United States has a large demand market in illicit wildlife goods. Nonetheless, it is intriguing that these illicit goods are smuggled out of the U.S. to other demand countries, especially in the cases of Li and the Khas.

However, it is also important to note that, “fewer than 330 Fish and Wildlife inspectors and agents patrol the largest U.S. ports, about the same as 30 years ago.” In particular, the JFK International Airport has only six FWS inspectors. With so few FWS inspectors in major U.S. ports, these inspectors do not have sufficient capacity to inspect illicit wildlife products being smuggled both into and out of the United States. In the long run, Operation Crash must have greater domestic and international support; in addition, FWS port inspectors must have greater capacity to prevent illicit goods from being smuggled into and out of the country.