↓ Skip to Main Content
Home › Demand Reduction › CITES CoP17: Will China Take the Lead in the Fight Against Illegal Ivory?

In the run up to CITES CoP17 in South Africa this month, all eyes will again be on China and the U.S. to take the lead in the fight against international ivory trafficking. This is no small task. Loopholes in domestic ivory markets have provided cover for the illicit trade worldwide. Even on the African continent, the question of whether or not to end legal trade is an unsettled one. Although 80% of range states are in favor of closing domestic markets, key players Namibia, Zimbabwe are in favor of continuing the trade in ivory. A proposal to further the closure of domestic markets with the support of international NGOs and demand countries has been submitted by a number of African states. Conference host South Africa and Japan have already announced their opposition to the proposal. Whether it will gain traction likely depends on pressure from the U.S. and China and their commitment to moving forward with efforts to close their own domestic markets completely. 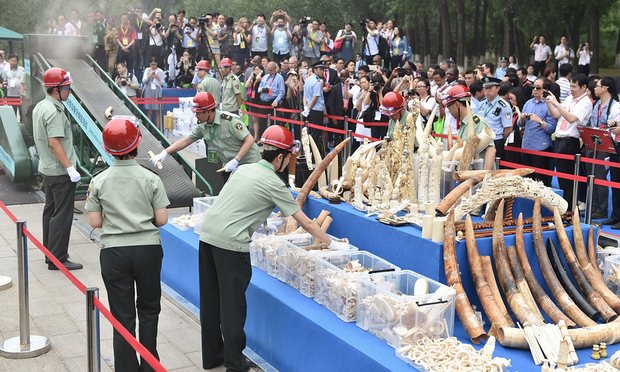 May 2015: the Chinese government crushes more than a ton of ivory in Beijing, Source: The Guardian

In a few short years, the Chinese government has gone from a strong proponent of the domestic ivory carving industry as important cultural patrimony to announcing the eventual closure of domestic markets, but there is still a long way to go. Powerful economic and political interests were alienated by this about-face in official policy. It remains to be seen now how the government can balance competing interest groups while still taking a proactive stance on ridding its markets of illegal ivory.

In 2014 and 2015, the Chinese government crushed over seven tons of ivory in Guangdong and Beijing in an effort to send a message to the world of its opposition to the illegal ivory trade. In September of last year, in solidarity with efforts by the U.S. government, China committed to a ‘near total’ ban on domestic ivory sales. In October followed a one-year ban on the import of ivory hunting trophies to China. This ban was extended in March of this year to include the import of all ivory products produced before 1975 and trophies obtained after 1975 until the end of the decade, excluding “ivory artifacts for ‘teaching and scientific research, cultural exchange, public display and law enforcement,’” according to the state forestry administration.

As important as these efforts are, conservationists worry that temporary bans and loopholes in recent regulations may incentivize stockpiling and laundering of illegal ivory through the still open domestic market. A flawed ivory registration system has led to rampant re-use and forging of certificates. In China today, there are still 34 licensed carving facilities and 130 traders, down only from 37 and 145 from 2013. A study published last month found that of 165 retail outlets, 92 were selling ivory without a license, the majority of which sold it openly. The government still retains an unknown quantity of the 62-ton stockpile it acquired legally during a one-off CITES sale in 2008, which it continues to distribute to licensed vendors. The lack of transparency in this process and a flawed registration scheme for legal ivory facilitate the laundering of trafficked ivory through the domestic market. Even as brick-and-mortar outlets are closed, demand is increasingly satisfied by online retailers in a gray market that makes enforcement efforts even more difficult. 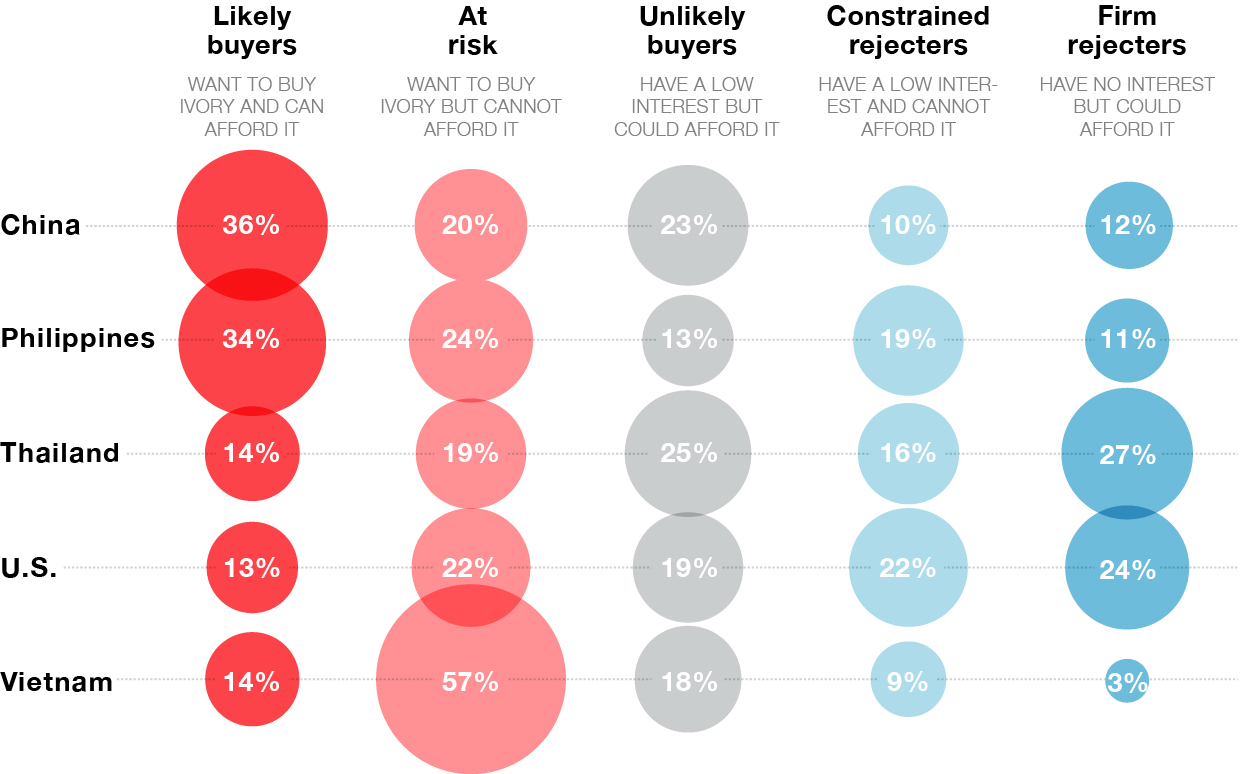 Moving forward, the Chinese government has a number of options that could help reduce demand for ivory in the short-term and facilitate the closure of domestic markets:

Allow ivory licenses to expire and stay expired. A complicated ivory licensing system is set to turn over at then end of the year. The head of TRAFFIC China, Zhou Fei, suggests that the easiest first step towards closing the domestic market would be to not renew these licenses. This would prevent illegal ivory being funneled through legal workshops but may also alienate the small but entrenched ivory-carving industry.

Initiate a government ivory buy-back program. Vested interests pose a great political obstacle to the closure of domestic markets. Offering collectors a way out may convince them to give up their ivory willingly rather than by force. Scholars have suggested using government eco-compensation funds to incentivize this turnover. Li Zhang, a professor at Beijing Normal University, estimates government buyback of all private stocks could cost upwards of 500 million USD.

Make the temporary bans permanent. There is growing evidence of ivory stockpiling by wealthy traders and collectors, many of whom are banking on a rise in price as ivory becomes more rare. Prohibiting interstate and domestic trade permanently is the most effective way to deny them a legal return on investment. In combination with a buy-back program, a permanent ban could encourage divestment of ivory stockpiles.

Crush remaining government stockpiles. In April of this year, Kenya destroyed a massive 100-ton stockpile of ivory, the majority of its reserves. Destroying ivory stockpiles is the only full-proof way to remove it permanently from the market and sends a strong message of political will. It furthermore removes the capacity for traffickers to launder ever-increasing illegal reserves through domestic workshops and traders.

Announce a stronger commitment to closing domestic ivory markets at the CITES Summit. The Chinese State Forestry Administration has announced a full timetable for the closure of the domestic market for the end of 2016. Preempting this announcement at the CITES summit this month would show China’s position as a leader in the fight against ivory trafficking worldwide and would send a strong message to other demand countries to follow suit. There is the possibility, however, that a premature announcement without rapid implementation could exacerbate demand, as traders rush to buy up ivory before it becomes illegal.

Until recently, China’s efforts have moved in lockstep with U.S. legislation. The process of gradual negotiation and implementation, as China’s CITES representative, Meng Xianlin, describes it, has been the strategy for China. But it is a strategy ill suited for the severity of the problem. The rate of decline of the African elephant demands drastic action, and the CITES Summit is the ideal venue for the world’s largest ivory demand states to uphold their commitments to ending the trade once and for all.

One comment on “CITES CoP17: Will China Take the Lead in the Fight Against Illegal Ivory?”