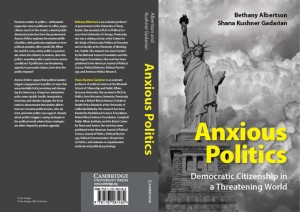 My book, Anxious Politics: Democratic Citizenship in a Threatening World, was written with Shana Gadarian of Syracuse University and published by Cambridge University Press in 2015. We were co-winners of the 2016 Robert E. Lane Award, Political Psychology Section from the American Political Science Association.

Contemporary American political life abounds with crises and worry. Terrorist attacks, a warming planet, and flu pandemics all trigger the public’s anxieties. Meanwhile, politicians use fears of economic downturns and cultural changes to evoke the public’s worries about immigration. Given that politics often involves anxiety, in this book we ask how and when is anxiety successful at causing citizens to engage with politics? In addition, we ask what is the substance of that political engagement? Political thinkers and democratic theorists express concern that anxiety may undercut citizens’ abilities to make rational political choices, yet recent research from political science and psychology paints a more hopeful picture of anxiety, suggesting that it may lead to more knowledgeable and trusting citizens.

Our theoretical contribution reconciles the normatively attractive portrait of anxiety in recent political science literature with the political uses of fear in contemporary politics. Anxiety is an unpleasant emotional response that causes people to seek protection from the perceived sources of harm. Politically anxious citizens cope in a decidedly partisan world. We rely on our original experiments as well as supplementary public opinion data to demonstrate that anxiety affects how citizens engage with politics in three main ways:

We use multiple policy areas (immigration, public health, climate change, and terrorism) to test how anxiety affects citizens’ engagement with political information, trust and attitudes. Importantly, these issues vary in their relationship to partisan politics. When an issue is closely associated with a political party (for example, immigration for Republicans and climate change for Democrats), partisanship can shape the ways that anxious people engage in politics. Anxious people seek out threatening news, but partisanship affects who remembers that news. Anxious people put their trust in relevant, expert figures, but on partisan issues, anxious people trust the political party seen as more effective on that issue. Finally, anxious people are drawn to policies that protect us from threat, and parties compete to offer protection. Our attention to the partisan side of anxiety in politics allows us to paint a fuller picture of the ways that anxiety shapes political life than accounts that either simply vilify or praise the role of emotion in politics.

‘This is a monumental contribution that is a must-read for anyone interested in contemporary American politics. The authors not only fundamentally advance academic knowledge about anxiety and public opinion but also offer critical insights into issues of the utmost importance (e.g., immigration, climate change, terrorism, etc.). The book will clearly shape future research agendas and ongoing policy discussions.’ James N. Druckman, Payson S. Wild Professor of Political Science, Northwestern University, Illinois

‘Albertson and Gadarian marshal an impressive array of evidence to demonstrate how anxiety shapes the behavior of citizens for both better and worse, how it can transcend and yet bend to partisan politics. Anxious Politics offers the most in-depth investigation into the political effects of anxiety to date and advances critical amendments to earlier scientific accounts. This is essential reading for understanding why attempts to stir up political fears can by turns promote democratic citizenship, subvert it, and fall on deaf ears.’ Ted Brader, University of Michigan

‘How do political communications that foster feelings of threat and insecurity influence citizens – how and what they learn, who they trust, and what policies they advocate? Anxious Politics offers a compelling set of answers to these important questions through experimental analyses that range widely across issues, context, and message form. Anyone with an interest in public opinion should read this book.’ Laura Stoker, Charles and Louise Travers Department of Political Science, University of California, Berkeley