The map takes about 10-15 seconds to load and will appear below. 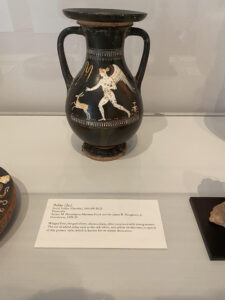 III. Location on Campus: The Pelike jar is located in the Blanton Museum of art on the second floor in the Greco-Roman art exhibit.

IV. Acquisition: This object was placed on UT’s campus in the Blanton Museum in 1988 as a part of the Archer M Huntington Museum Fund. After originally providing the University with the Diana of Chase statue, Mr. Huntington became infatuated with providing an art venue for the University of Texas and its students. He gave a gift of around $145,000 to start a fund for the cultivation of art around campus. This gift ultimately laid the foundation for the Art Building where the Archer M. Huntington Gallery was originally housed (“A Vision”). As an eventual addition to this collection through the Huntington fund, the Pelike of Eros chasing a fawn is not the grandest piece of the collection or most recognizable, but it demonstrates the ever present impact of love and desire on innumerable myths to the student audience. Though primarily known because of the great love story of Eros and Psyche, simply depicting Eros with a fawn simplifies and broadens the scope of the Olympians’ impact and possible interpretations.

V. Description: This Pelike Jar is simply titled “Pelike (Jar)”. It is a piece of ceramic pottery, fired black, detailed with white characters, and completed with terracotta as a medium and support. The white figures on the Pelike portray the winged somewhat effeminate god Eros chasing a fawn. There is a plant etched behind Eros and a curvy design above the fawn. White patterns encapsulate the scene on the top and bottom. Use of white, red, and yellow coloring on the piece was common for this type of ornate pottery.

In order to truly understand this piece of art, one must understand the cultural context
surrounding Eros. Two separate figures of Eros were prominent in Greek culture. One version was the primeval god who came forth form Gaia. This form of Eros represented desire and attraction, but not in a physical sense (Brettenburger). Rather, it bonded together various elements of the universe in order to spur creation, development and creativity. The other version of Eros is the son of Aphrodite. He is often depicted as a young winged man whose sphere of activity is physical attraction with respect to lust and sexual love. This version of Eros is often seen as a companion of Aphrodite, aiding her in conveying lust and sexual desire upon unsuspecting mortal and immortal victims (EROS).

The winged and youthful appearance of Eros on this Pelike makes clear that he is
representative of the later version of Eros. Though this piece of pottery is believed to be crafted right in the middle of the age of Hesiod, who yielded the former interpretation of Eros and the works of Ovid who made popular the secondary view of Eros, it can clearly be determined that he is representative of this sexual love associated with later verisons of Eros. The great power of Eros to attract lovers is made evident in a scene from the Metamorphoses. When one of Eros’ arrows simply scratched Aphrodite , “She became enraptured by the beauty of a man” (Ovid, Metamorphoses 10. 525 ff). Eros has incredible power and influence over gods and mortals alike to influence their loves and effections. This is especially important in interpreting this Pelike because of the fawn Eros is chasing after. Rather than a mythological half goat-half human. This fawn is an actual young deer, often associated with young women. Deer in general are found to be associated with Artemis, who was believed to protect and defend these wild creatures (Hughes). Artemis association with virginity and purity can also be associated with these creatures. This makes Eros’ pursuit of the creature especially intriguing given that he is known as
a figure that, “smites maids’ breasts with unknown heat, and bids the very gods leave heaven and dwell on earth in borrowed forms.” (Seneca, Phaedra 290 ff). Eros great power to manipulate sexual desires coupled with the relative innocence of the young fawn show that this Pelike is meant to warn young Greeks and their guardians about the dangers of Eros. This type of controlling and manipulating lust is always lurking and ready to capture the heart of any unsuspecting victim. This piece can be understood as a warning for Greeks to stay alert and ready in case they are stricken by an attack of eros, because gods and mortals alike know of his great power and influence. But also, it can be seen as a testament to Eros’ great power, as seen by his gigantic size compared to the young fawn and its seemingly helpless flight from this great god. Though he is not depicted as the strongest amongst the gods, Eros incredible ability to influence desires and passions is unmatched and must be heeded by viewers.

Works Cited
“A Vision Grows into One of the Finest Art Collections on Any U.S. Campus.” UTIMCO, 2010. https://www.utimco.org/funds/allfunds/stories/st_utaus_00.asp.