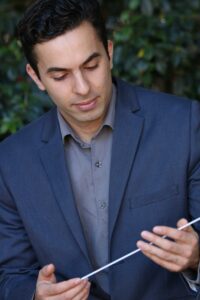 Described by the critics as “magician on the podium” and “the man of exceptional charisma” (Performing Arts Monterey Bay), with “the ability to connect with invisible worlds and to bring them alive in the music” (Herald), Farkhad Khudyev, has been recognized by the government of the United States as an Artist of Extraordinary Ability.

Farkhad was born in Ashgabat, Turkmenistan, where he first studied violin, piano and composition at the State Music School for gifted musicians. At the age of 10, he distinguished himself as the youngest performer selected to play with the National Violin Ensemble of Turkmenistan, and toured around Central Asia and Eastern Europe. As a soloist and a member of the Ensemble, Farkhad performed for the Presidents of France, Ukraine, Russia, Turkey, Kazakhstan, Uzbekistan, and Turkmenistan. At the age of 12, he was chosen to represent the country at the International New Names Festival, sponsored by the Moscow Conservatory, and was named as one of the most promising young musicians at the festival.

In 2001, Farkhad came to the United States to study at Interlochen Arts Academy and then completed his Bachelor of Music degree at the Oberlin Conservatory. He received his Master’s degree in orchestral conducting from Yale University. 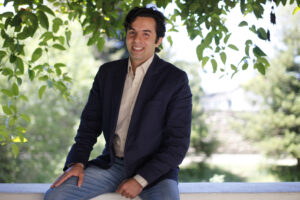 Mr. Khudyev is the winner of the 3rd prize at the 8th International Sir Georg Solti Conducting Competition in Germany, the Solti Foundation US 2018 Career Assistance Award, the Best Interpretation Prize at the 1st International Taipei Conducting Competition in Taiwan, the 1st Prize at the Yale Chamber Music Society Competition and the Gold Medal and Grand Prize at the 2007 National Fischoff Chamber Music Competition in the US. Mr. Khudyev has performed around the United States, Europe and Asia at world-class venues and festivals including the Kennedy Center in Washington D.C., Emilia Romagna Festival in Italy, DR Koncerthuset in Denmark, Zhongshan Hall in Taiwan, Shaanxi Performing Center in China, the Alte Oper Frankfurt Großer Saal and the Mecklenburg-Vorpommern Festpiele in Germany.

Farkhad has served as the Music Director of New Jersey Intergenerational Orchestra, New Haven Chamber Orchestra and Youth Music Monterey County, as well as the Associate Conductor of the Hidden Valley Opera and the Assistant Conductor of the London Philharmonic Orchestra. Currently, Mr. Khudyev serves as the Music Director of the University of Texas Symphony Orchestra in Austin, and the Orchestral Institute at the Hidden Valley Institute of the Arts in Carmel, California. 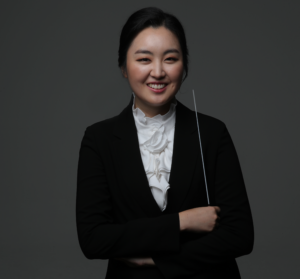 Yoona is a well-rounded musician with a diverse musical background. She graduated with honors from Pusan Arts High School as a violin performance major. She received her Bachelor’s Degree in Musicology at Seoul National University in South Korea where she graduated summa cum laude and received the chancellor’s award. In 2014, she matriculated at the University of Southern California and earned a Master’s degree in Choral Music at the Thornton School of Music. In 2018, she earned a second Master’s Degree in Orchestral Conducting at Baylor University where she was the graduate conductor, manager and head librarian of the Baylor Symphony Orchestra. 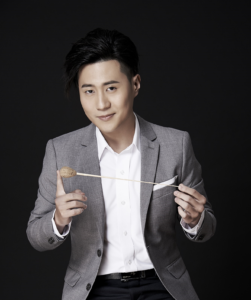 Ke Yuan was born in Kaohsiung, Taiwan, where he began studying trumpet at the age of 9. He was the 3rd place winner of Trumpet Solo at the 2011 National Student Competition of Music in Taiwan. In 2015, Ke Yuan Hsin completed his Bachelor of Music degree at Soochow University, where he continues to pursue his Master’s degree in orchestral conducting. Ke Yuan won the 2016 Soochow University Wi Shun-Wen Scholarship and Chu Tsung Music Scholarship. In 2017, he was invited by the National Chinese Orchestra (Taiwan) for the Youth Conductor Training Academy.