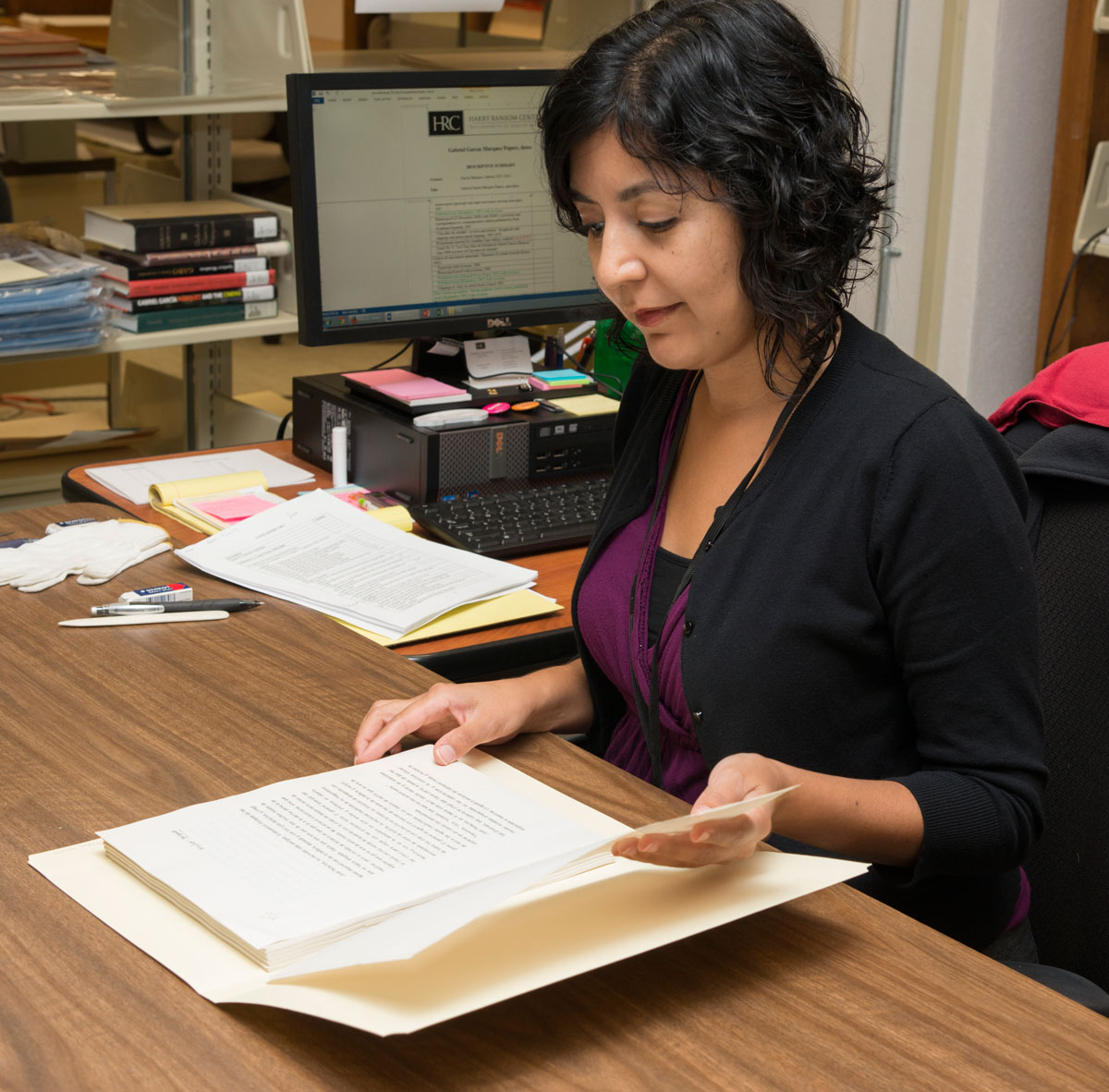 Daniela Lozano has been an archivist with the Ransom Center since January 2012. She is originally from Edinburg, Texas, and earned her bachelor’s degree from Rice University in Houston and her Masters in Information Science from The University of Texas at Austin. She first joined the Ransom Center as a graduate student volunteer working with Curator of Film Steve Wilson. She recently cataloged the Gabriel García Márquez archive and, with Senior Archivist Joan Sibley, completed a re-cataloging project of the J. Frank Dobie archive.

How did you know you wanted to be an archivist?

I had been working as a graphic designer, and it was okay, but it wasn’t what I wanted to keep doing. I wanted to go back to school, and I had always had an interest in libraries and in becoming a librarian. When I looked into the program here at The University of Texas at Austin, I saw that they had a great archives program, and it sounded appealing. I took the Intro to Archives class my first semester and just really loved it.

Before graduate school I volunteered at the Austin History Center for a bit, and then while I was in school I volunteered here at the Ransom Center and did my archives project at the Benson Latin American Collection. While at the Austin History Center I worked with the photography archivist. They have a lot of interesting material for those who are interested in Austin history and the history of buildings around town.

What would you say is your favorite part about the job?  What excites you most?

I enjoy that it’s so hands-on. I spend most of my day looking through really interesting items and I’m not just sitting in front of a computer all day. As an archivist I get to learn a lot about the people whose material I’m working on, and become familiar with them and their life. I definitely learn a lot at this job. I also like organizing things—I know that sounds nerdy! I like the idea that we’re trying to make it so that the materials last as long as possible and then also make them available for people to look at and use.

Tell me what it was like to work with the Gabriel García Márquez archive. What are you excited to be sharing from that collection?

Because the material is primarily in Spanish, we needed someone who was fluent in it to process the collection, and so I got to be that lucky person! It’s been very exciting, and I’ve learned a lot about García Márquez and his works.

Early on he didn’t keep many of his drafts, so there is not as much material for his earlier works, although we do have two One Hundred Years of Solitude manuscripts and a few drafts from other early works. But for his later novels—when he started using a computer—there are a lot of drafts. It was really amazing to get a sense of his process. He was a perfectionist, and he was constantly tweaking words here and there to make it a work up to his standards. One of the most exciting parts of the collection is the drafts of his unpublished work which not many people have seen. Another big component is the photo albums. There were over 40 photo albums that came with the collection, so getting to look through them and see all his photos, with family friends and personalities like Fidel Castro, that’s been really fun. The photo albums seem to cover all aspects of his life, from when he was really young to when he is older.

There’s also a lot of fan mail. He received so much fan mail. A huge part of the correspondence is people writing to tell him how much they loved him or requesting autographs. I came across one letter from someone writing to share that they had named their son after him. It was a unique last name, so I thought, “Wow, that person is my age, I wonder if can find him on Facebook?” I did not find him on Facebook, but I did find somebody auctioning off the letter that García Márquez had written in reply to their letter. So he did sometimes reply to his fans!

Do you have favorites in the photography collections here at the Ransom Center?

One of my early projects was working on the collection of photographer Anne Noggle. She was a Women’s Airforce Service Pilot (WASP) who also did stunt flying. She ended up getting emphysema and couldn’t fly anymore, so she was discharged. She became a photographer and was also a curator for the Museum of Fine Arts (now the New Mexico Museum of Art) in New Mexico; she was already in her 40s when she went back to school for her master’s in photography. Her collection is wonderful because we have all her photographs, her negatives, even a few of her cameras, and we also have stuff related to her career in aviation including her WASP uniforms and her goggles.

What’s special to you about the Ransom Center? What do you love?

The collections are why many enjoy working here so much. Where else could I be able to look through Gabriel García Márquez’s letters, manuscripts, and personal things. It’s definitely why I love to work here. I get to learn so much. I didn’t know who Noggle was before, and I didn’t know that much about J. Frank Dobie besides the building next door being named after him, but now I’m very familiar with them. Just learning every day and getting to work with such amazing material is special.

Is there anything anyone would be surprised about with your job as an archivist?

I guess it would just be some of the material we come across sometimes. I’ve had moments where I’ve found hair. People would sometimes keep their hair, or their loved one’s hair, and it’s always a little surprising to come across an envelope filled with hair. It’s happened twice so far. I think people would just be surprised by the range of different collections we have here. A lot of people probably think that it’s only books and papers, but there’s much more.

Do you find that you’re constantly talking to your friends about your work?

I do. Everyone’s always interested in what collection I’m working on and what I find. I have a friend who regularly asks if there can be a “Bring your Friend to Work Day”! She wants to come in and see everything.

I like going out to see live music, movies, and festivals around town. I enjoy going to the Alamo Drafthouse to see movies.  It’s one of my top places and one of my favorite things about Austin. I also like to hang out with friends, and walking my dog. Barton Springs is a popular place; I think everyone who comes here should go there at least once. The Blanton Museum has such good exhibits; I would definitely recommend people to check it out.