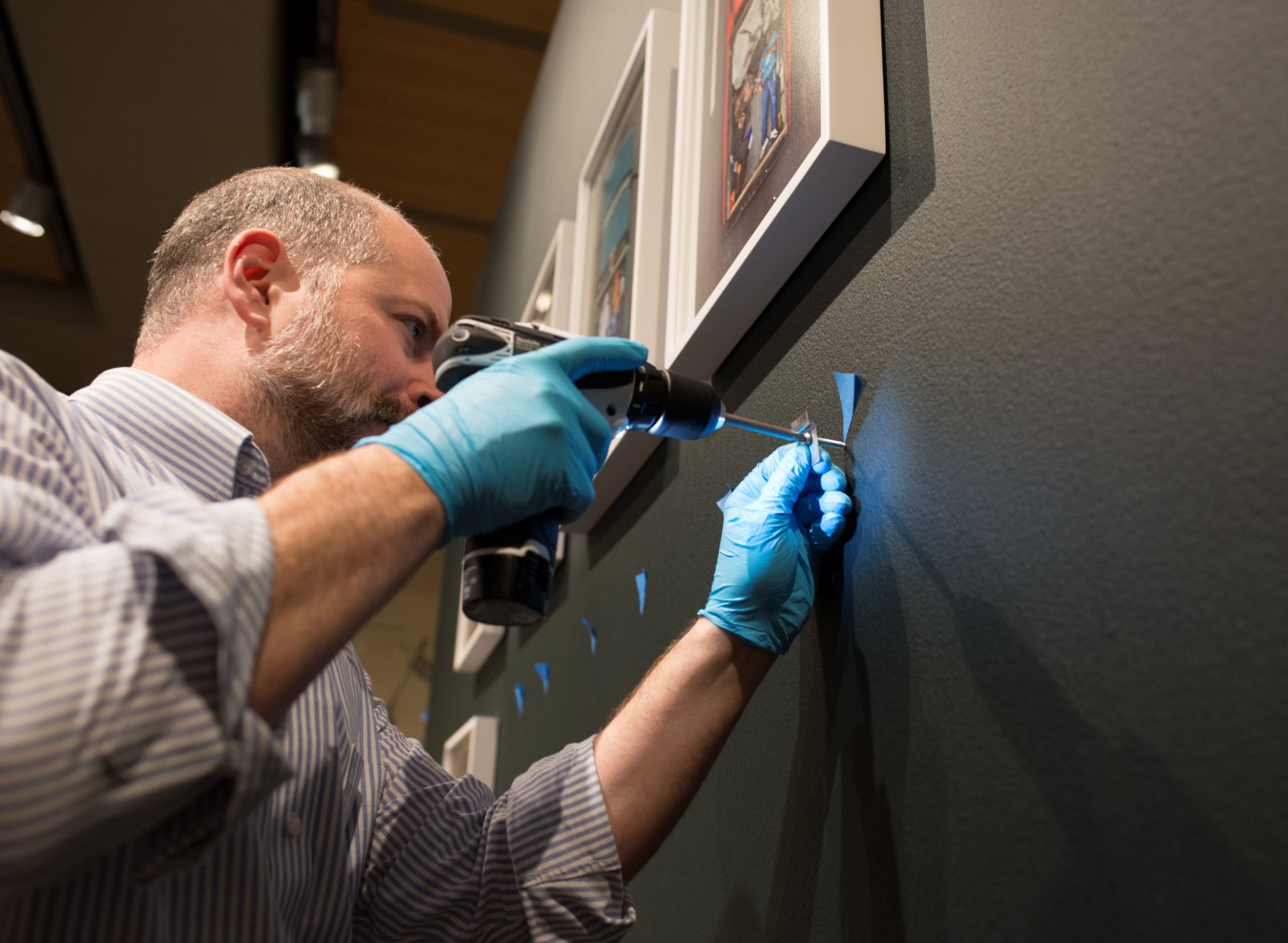 Rob Hay has been at the Harry Ransom Center for two and a half years. He worked as a preparator before taking on his current position as head of exhibition services.

Hay received his Bachelor of Arts and Master of Arts degrees at Morehead State University and went on to earn a Master of Fine Arts in visual arts from Marywood University in 2008 before moving to New York. During his five years in New York City, he worked for Taglialatella Galleries preparing and staging contemporary art for exhibition as well as creating original pieces for display at the gallery, which he continues to do from Austin.

As head of exhibition services, what exactly does your job entail?
I supervise the preparation of all material for exhibition and loans. And that can be everything from matting and framing traditional artwork to building plexiglass cradles for books. I’m the one who helps facilitate those details so that we meet our deadlines. We’re typically the last people in the exhibition process making sure everything runs smoothly so that the exhibition opens on time.

What’s been your favorite exhibition that you’ve worked on here?
The first exhibition I worked with was The World at War, and I just personally enjoyed going through all of the material. I have an interest in history, so being able to look at all that material firsthand was a good introduction to the Ransom Center. As far as the actual prep and installing, I think Alice’s Adventures in Wonderland was the most enjoyable because it had—in addition to typical framing and matting and book cradles—a lot of different aspects that allowed us to experiment and play and have some fun. I’ve been here for three years, and honestly every week I see things that I had no idea that we had here. The archives here are so expansive that it’s impossible to display and share everything we have.

Can you tell me more about your work before coming to the Ransom Center?
Prior to the Ransom Center, I was in New York City. I was working at Taglialatella Galleries in Chelsea, and I did all the art handling and preparation—all the packing, shipping, installing, hanging—pretty much any aspect of gallery logistical operations aside from sales. We had sister galleries in Paris and Palm Beach and I was the liaison with them, and we would rotate inventory between the three galleries. Prior to that, I taught drawing and painting for about two years at Marywood.

So you do both sides of the business—creating physical art and installing exhibitions?
Yes, and that’s one thing that still ties me to Taglialatella Galleries. After about a year the owner of the galleries said, “You’re a painter, right? Why don’t you put a painting on the wall?” And I thought, okay why not? The gallery deals mostly in twentieth-century pop masters like Warhol, Lichtenstein—all the big names. We put some of my work up, and there was a pretty good reception, so ever since then they’ve represented me. I still paint in the mornings, and then send the finished paintings to the gallery. So I continuously show in Paris, Palm Beach, and New York.

As a father of two, a painter, and the head of exhibition services, I know you don’t have a lot of free time. But apart from the Ransom Center and your own art, what do you like to do for fun in Austin?
I have two sons, and they’re in daycare, so my wife and I don’t get to spend a lot of time with them. But on the weekends, we get up almost every Saturday and go to the Greenbelt, and we’ll sit and spend half the day in the creek and just let the boys hike and play and everything. We actually lived in Jersey City before we came here. We were in 600 square feet in the city, and we worked in Manhattan. That’s one of the reasons why we picked Austin: it’s beautiful, it has great parks and great places like Bull Creek where you can still get out and it’s not too crowded. We take full advantage of that. 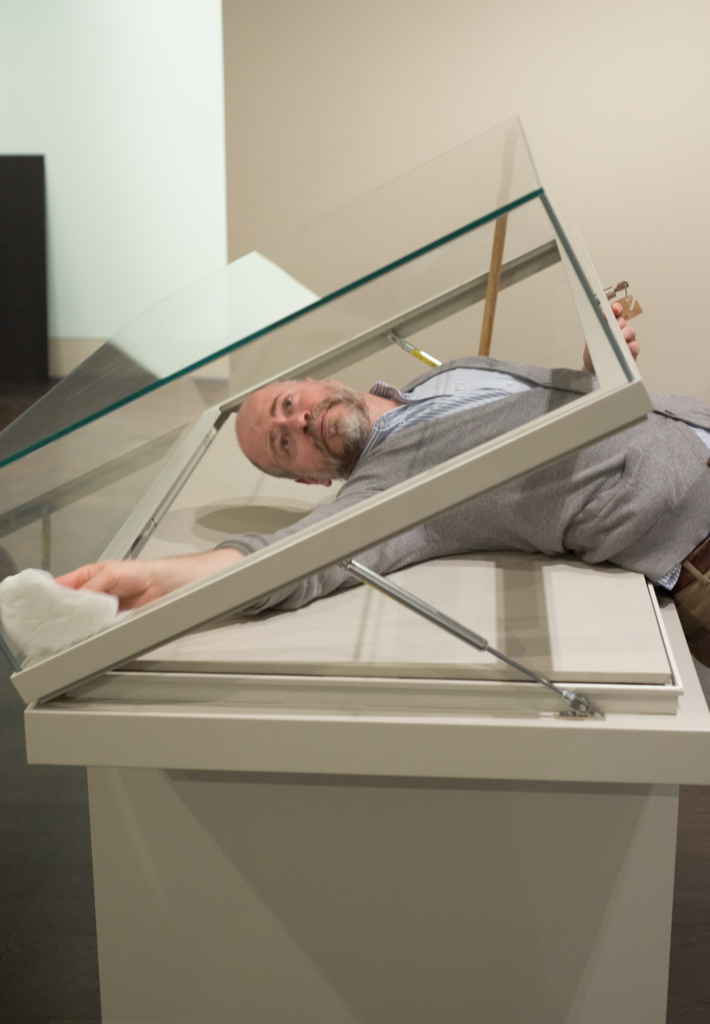 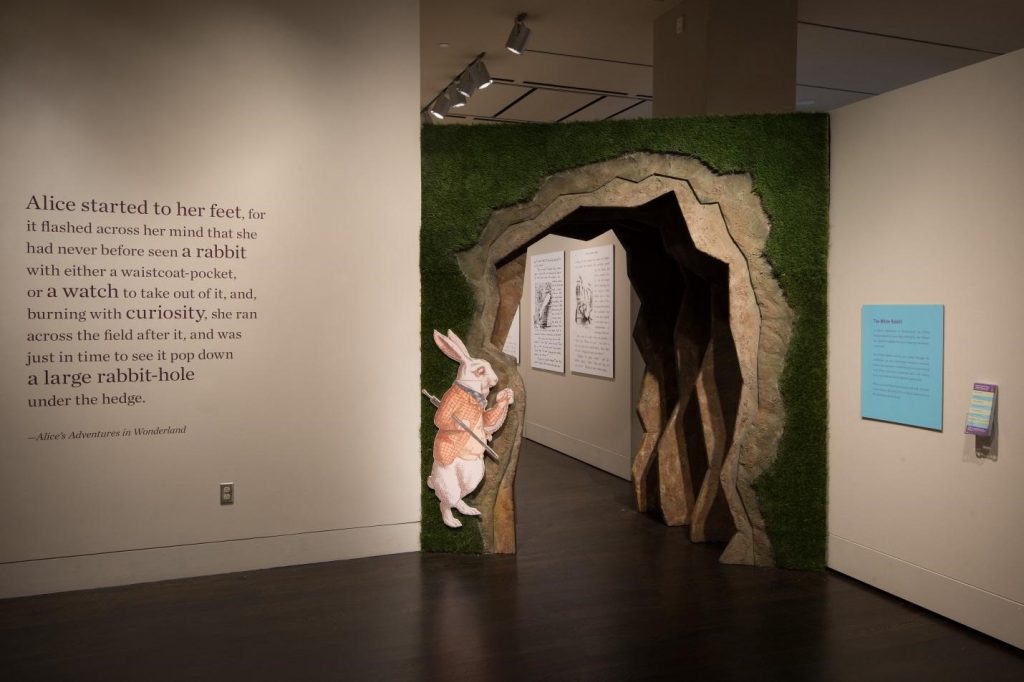 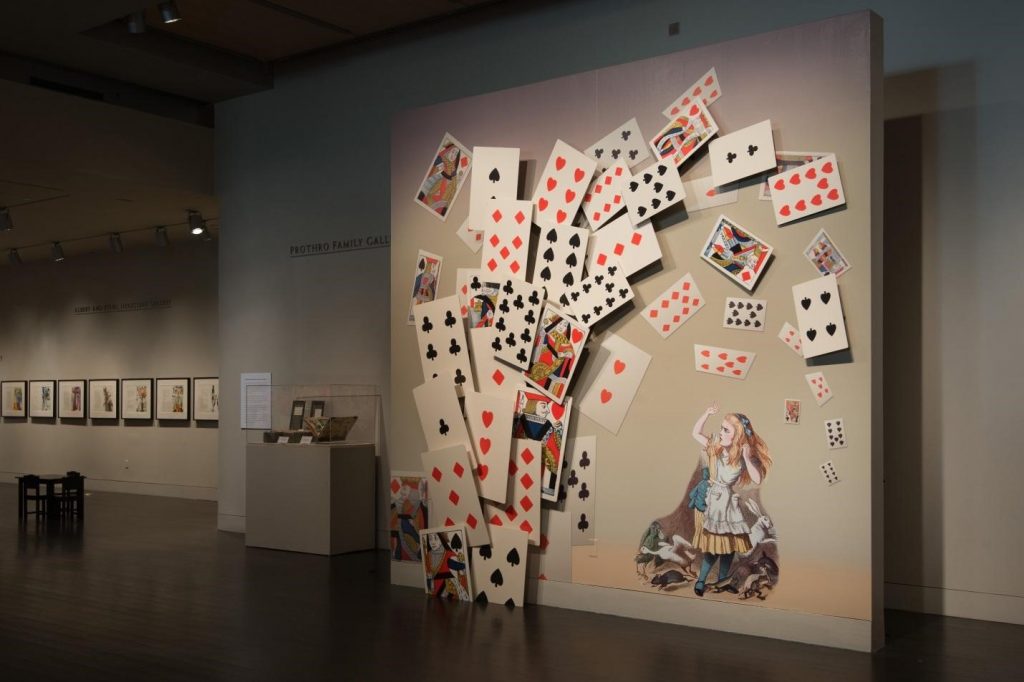 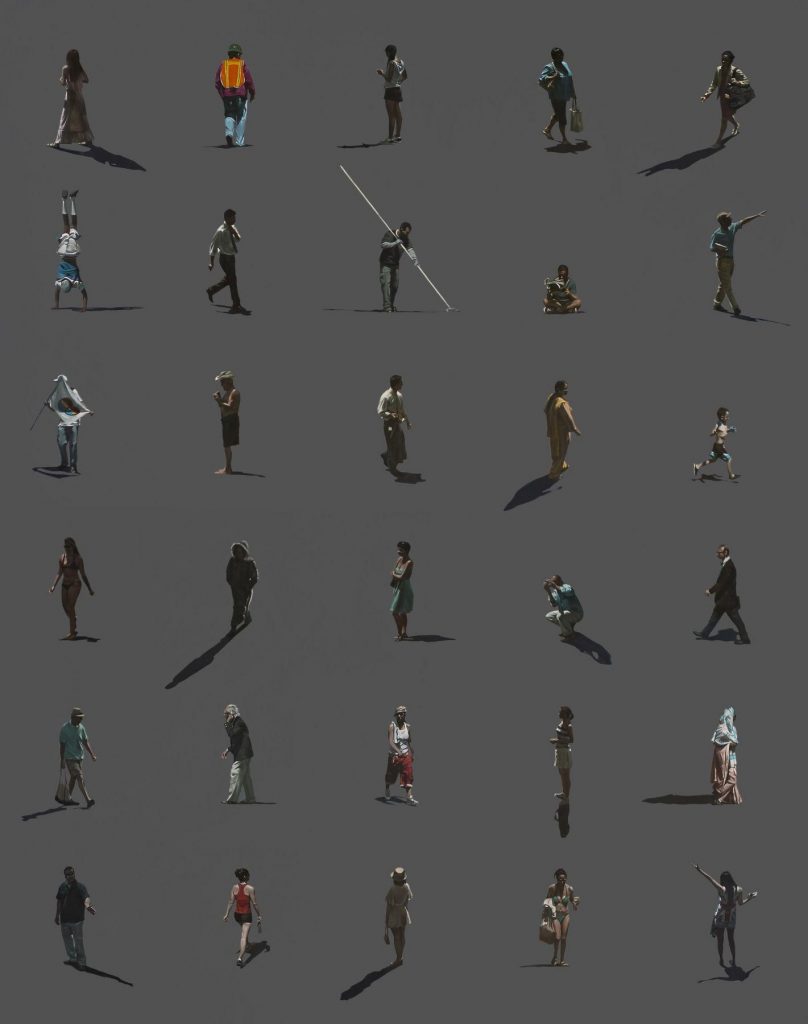 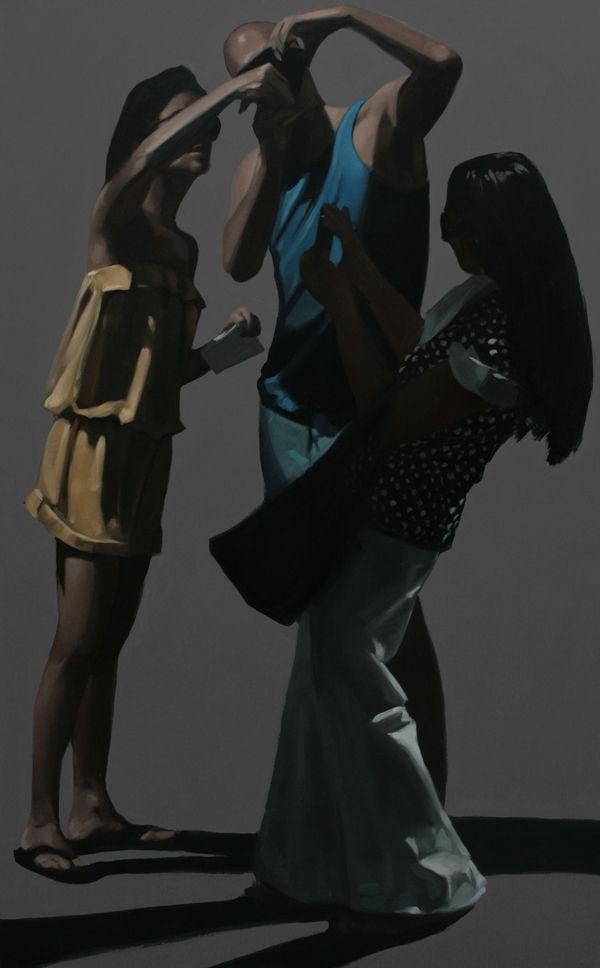 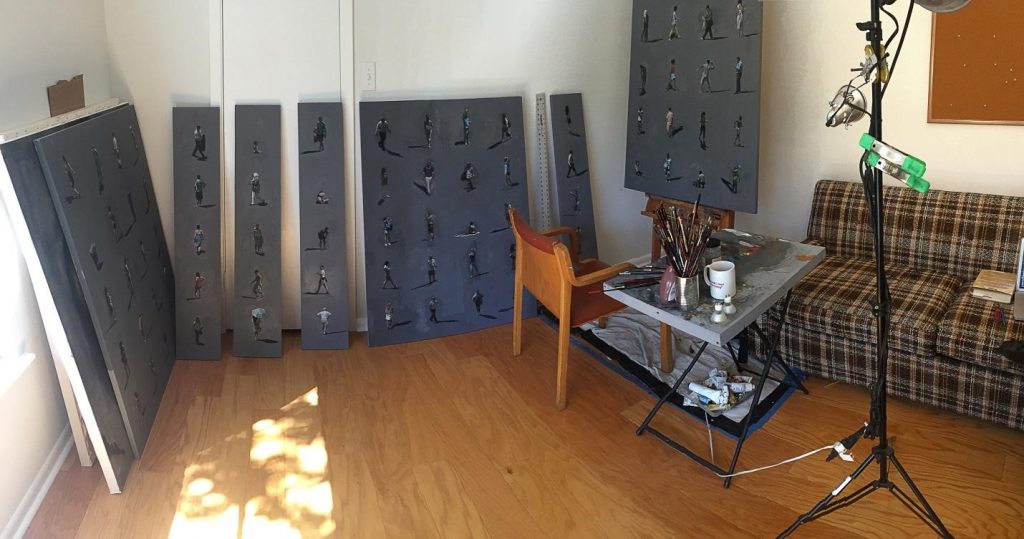