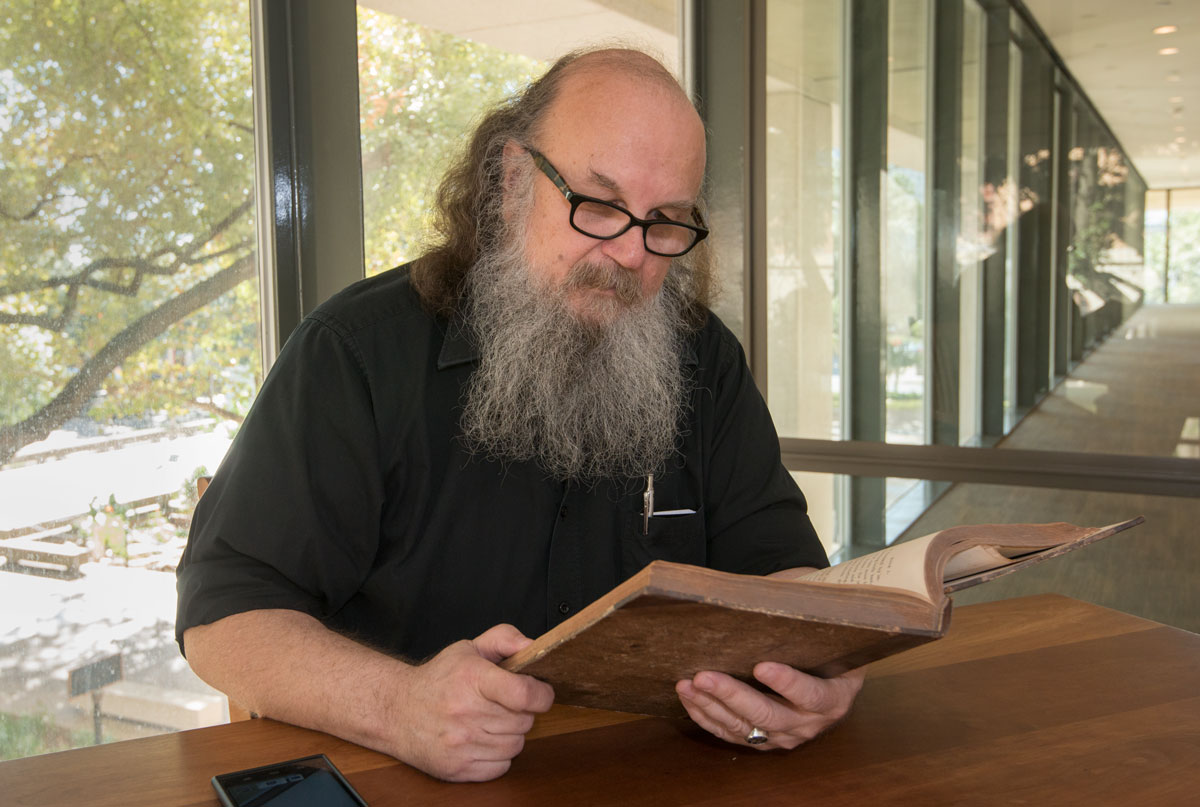 He discovered the Ransom Center during his time at The University of Texas at Austin and worked here until moving to Taiwan in 1989 with his wife, a linguistic anthropologist, who was a Fulbright Scholar at Academia Sinica in Taipei. Gilmore returned to the Ransom Center in 2013 and is currently the Visual Materials Assistant in the Reading Room.

What initially attracted you to the Ransom Center?

After my student years at UT, I started working at the Perry-Castañeda Library. I worked there for about a year before hearing about the Ransom Center. I was immediately intrigued by the range of material in the collections. I managed a lateral transfer as a senior clerk typist (a position I don’t think exists anymore) and then became a library assistant. I worked in serials and in book cataloging. After being gone for 24 years, I came back in 2013 as a part-time page, which was marvelous because, as a page, your work takes you all over the building and you become quite familiar with collection. I also began part-time work in performing arts as a collections assistant. A year and a half ago I gave up both positions to become a full-time library assistant running the visual materials desk.

What did you do in the interim between your employment at the Ransom Center in the 1980s and now?

In Taipei, I taught English to primary school children and edited papers for social scientists at Academia Sinica. They would translate their own papers into English for presentations at international conferences, but needed assistance with copy editing and style. After the Fulbright, my spouse had a post-doc at Columbia and we lived a year in New York City. I worked at the New York Genealogical and Biographical Society Library.  Once the post-doc was over, we moved to Iowa, where we had a daughter (who currently works down the street at the University’s business school). In Iowa, I spent my time employed in either bookstores or libraries. We returned to Taiwan in 1999. We lived in Hsin Chu (a tech hub) and I taught at the Princeton Review and again edited academic papers (and one book); this time for professors at Tsing Hua University.

What do you do in your current job?

This job is a new challenge because, even though I report to the supervisor who oversees the Reading Room, I work closely with four curators—the art curator, the performing arts curator, the photography curator, and the film curator. I assist patrons with requesting and handling materials from these collections.

What are some of your favorite collections?

There are a few books that come to mind. My favorite is a book written by Max Eastman that Ernest Hemingway busted over Eastman’s nose. You can see the broken binding where it was snapped shut. They laughed about it afterwards and they both signed the book. I was able to catalog that back in the eighties; a box of Hemingway material that had been sealed until 25 years after his death was finally opened. When I saw that book and it fell open where the spine was broken, I immediately knew what it was from having read biographies of Hemingway.

Another curious item is T. E. Lawrence’s personal copy of Ulysses. Some people think it smells like motor oil and others think it smells like tobacco. I personally think that the fore-edges smell like motor oil because, for a time, he worked as a mechanic with the Royal Air Force in what is now Pakistan. But when the book is opened, I can smell a distinctive type of tobacco called latakia, which is from Syria—and once you smell this tobacco, you will not mistake it for anything else. That’s my theory, anyway.

I collect books. Whenever I travel to a new city, I head to the local bookstore. Recently, I was in the Orkney Islands off the northern coast of Scotland, and there was a village of about 4,000 people, Stromness, and I found a bookstore that was barely larger than a walk-in closet. It was jammed with good books. It was not particularly aimed at tourists although it had a great deal of books by George Mackay Brown, a local poet who spent most of his life there, and naval histories of Scapa Flow, the main port for the home fleet during World War II.

I heard that you also write poetry.

Oh yes, that. I almost forgot! It’s a habit I acquired as a teenager. I’ve had a few collections published. I should dedicate more time to it, but I’m lazy (which is why I write poetry and not novels). I give poetry readings around town every once in a while. I’ve read at Malvern Books, BookPeople, the Cactus Cafe, and oddly enough, a small bar on Chicon Street.

Do you have any big inspirations or influences on your poetry?

Influences? Ezra Pound and Basil Bunting. Also, the Russians—Mayakovsky, Brodsky, and Pasternak—for their blend of futurism, politics, and surrealism.

In my last book, Restless Astronomy, I have a section subtitled “Chinoiserie,” which is a de facto mini-collection based on observations and experiences acquired in Taiwan. So, a touch of zen and Asian aesthetics, too.

In retrospect, maybe I should just say, everything and all.