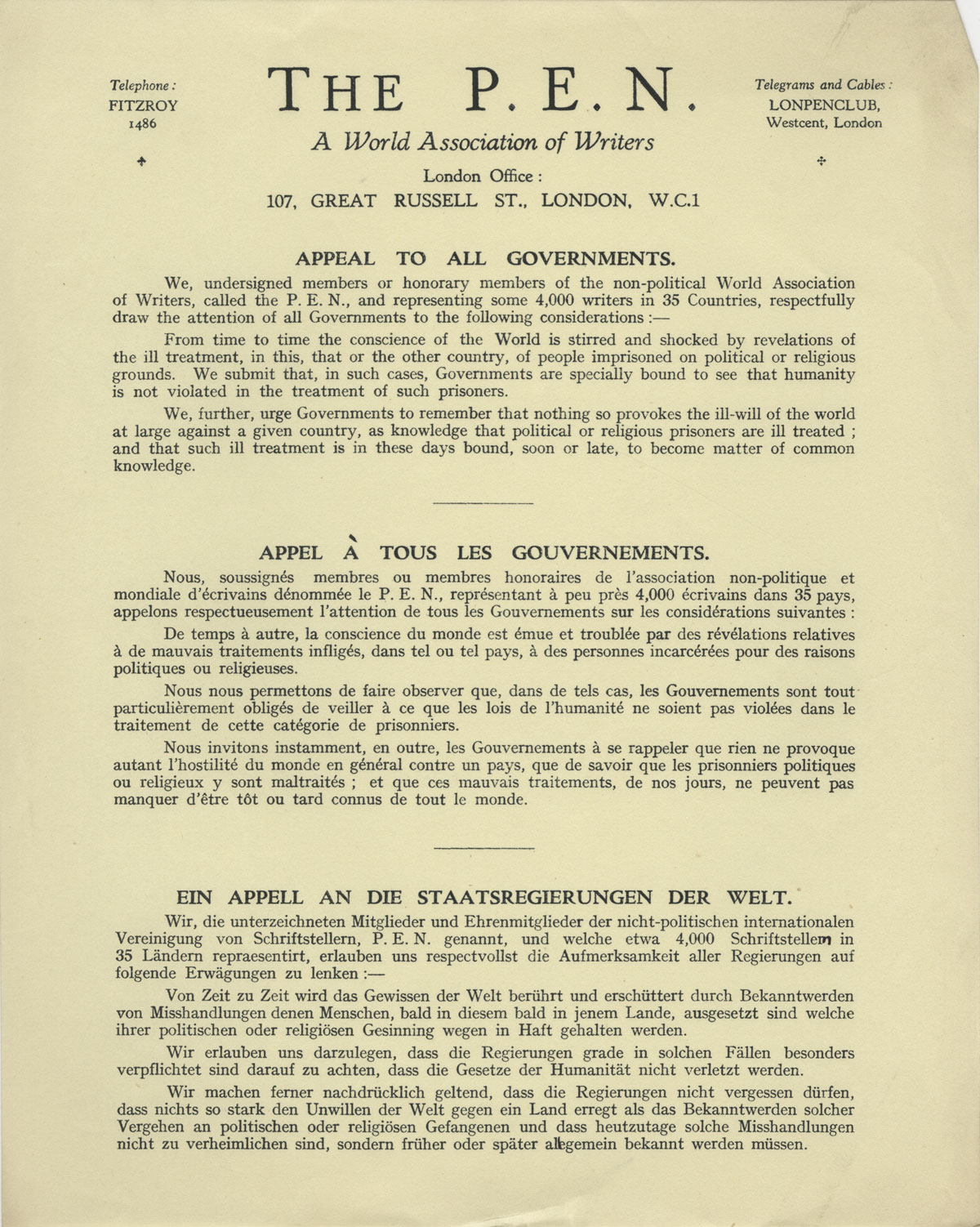 The story of twentieth-century political activism, persecution, and creative expression cannot be fully understood without exploring the rich materials in the PEN records at the Harry Ransom Center. The archives of PEN International and English PEN offer unique insight into human rights crises and document important cultural, historical, and literary debates of the last century. They illustrate in vivid and compelling ways why the humanities are integral to questions of equality, social justice, and freedom of expression and how humanists can successfully and powerfully engage in the public square.

“When political people have finished with repression and violence PEN can indeed be forgotten. Until then, with its floundering and failings and mistaken acts, it is still… a fellowship moved by the hope that one day the work it tries and often manages to do will no longer be necessary.”—Arthur Miller, former PEN International President

The Power of PEN

On May 10, 1933, a series of staged book burnings in cities across Germany provoked international debates about freedom of speech, censorship, and the fundamental importance of literature to a free society. Just two weeks later, PEN International convened its annual congress of writers in Dubrovnik, Yugoslavia. With H. G. Wells presiding, writer-delegates discussed the book burnings, how to respond to pro-Nazi German delegates in their midst, and whether to permit exiled German Jewish playwright Ernst Toller to speak despite German delegates’ objections. By the conclusion of the meeting, German delegates had left in protest, and Toller had addressed the congress. PEN, a relatively young organization, had adhered to its founding principles and reaffirmed its commitment to support “unhampered transmission of thought within each nation and between all nations.” In that moment, it also completed a transformation that had begun shortly after its founding in 1921, shifting from an apolitical organization to foster friendship and intellectual cooperation among “Poets, Essayists, and Novelists” to a human rights organization marshaling its membership to challenge the rise of fascism across Europe.

Nearly a century after its founding by British writer, poet, and playwright Catharine Amy Dawson Scott, and with a membership that now extends to journalists, publishers, and editors, PEN has left an indelible mark on international politics, culture, and literature. PEN’s reach is truly global and has been from inception. Within a year of its founding, PEN centers had spread to France, America, Belgium, and Sweden, soon followed by centers in Norway, Italy, Catalonia, Spain, Poland, Australia, Argentina, Japan, Brazil, and India. Today, there are 149 centers worldwide, each autonomous but working in tandem with the umbrella organization PEN International.

In the years since the 1933 PEN congress, English PEN, PEN International, and its other centers have retained their activist turn: protesting Nazi party treatment of intellectuals, the Franco regime’s imprisonment and death sentence of war correspondent Arthur Koestler in 1937, and the persecution of Jews in Poland. During World War II, PEN helped secure release of exiled German writers from British internment camps, and the organization served as advisor to the British Home Office on treatment of internees. Post-war years were devoted to recovery, continued assistance for refugees and exiles, and reestablishment of international ties broken by the war. Continuing efforts to help persecuted writers—in Greece and Chile during the 1940s and in Iran during the 1950s—led to the 1960 formation of the Writers in Prison Committee to combat ongoing attempts to silence writers through detention. In the 1970s, PEN established itself as a forum for writers from communist countries seeking to evade state censorship. An extensive PEN campaign supported novelist Salman Rushdie, when he received a death sentence in a fatwa issued by Iran’s spiritual leader in 1989. In the 1990s, PEN established the Women Writers Committee to confront challenges faced by women writers around the world, including unequal access to education and prohibition from writing. An online illustrated timeline entitled The PEN Story celebrates these and other highlights of the organization’s first 90 years.

Throughout its history, PEN has counted some of the world’s most distinguished authors among its leadership. Just as importantly, PEN has been a voice for relatively unknown writers, particularly those facing persecution. In 1967, PEN International president Arthur Miller intervened on behalf of then little-known playwright Wole Soyinka, scheduled for execution in Nigeria. On the basis of Miller’s intervention, Soyinka was freed. Soyinka received the Nobel Prize for literature in 1986 and now uses his own international reputation to call attention to PEN’s efforts on behalf of an international community of writers. Today PEN defends freedom of expression and promotes literature through programs implemented by its global network of centers in more than 100 countries. International congresses allow delegates to engage in dialogue and form a circle of solidarity when needed. PEN supports and celebrates literature through community programs, literary awards, conferences, translations of works in lesser-known languages, and the publishing of anthologies, magazines, newsletters, and pamphlets.

What’s in the PEN archives?