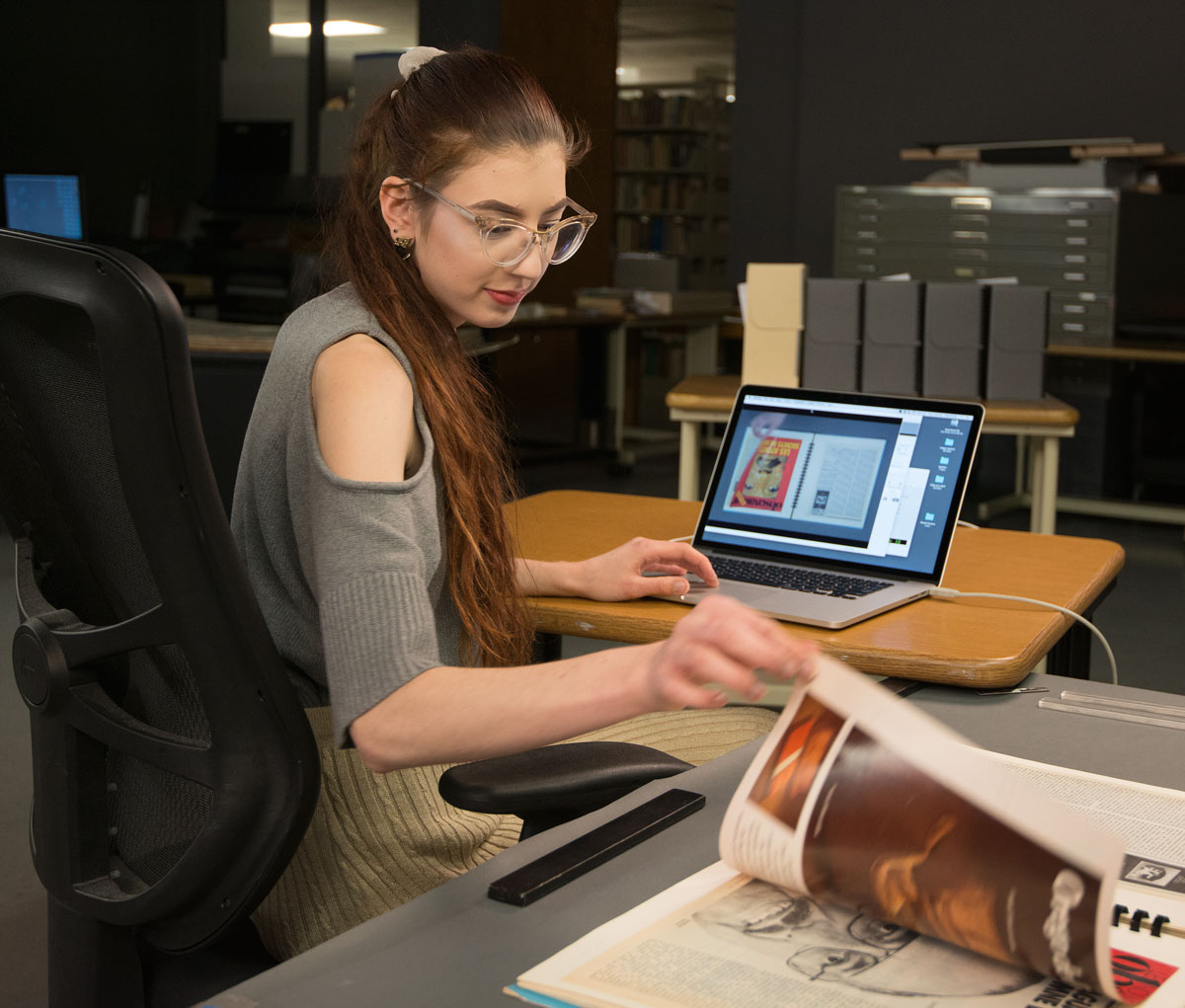 At the end of the rows of upright document boxes containing Gabriel García Márquez’s manuscript drafts, research notes, personal ephemera, photographs, and correspondence are 15 oversize boxes lying flat on the shelves that hold the writer’s collection. Open oversize box 6 and you’ll find a binder with a soft, light brown leather cover embossed with an image of a giraffe and the words “por Septimus.” The binder is currently empty, its pages having been moved for preservation and ease of viewing to the last document box in the collection, box 79. In that box, you’ll find stiff, slightly yellowed pages with clippings of some of Gabo’s earliest published work, his “La Jirafa” column, which he wrote for the newspaper El Heraldo from 1950 to 1952 under the pen name Septimus. Another volume of clippings, titled “La Novelería por el Novelista Nobelado”—this one in box 53, folder 1—contains press coverage of Gabo’s Nobel Prize award 30 years later. These are two of 22 scrapbooks in the collection that extensively document the production and worldwide critical reception of the writer’s work up to 2011. They are invaluable encyclopedias for scholars of Gabo as well as being striking artifacts. And they’re simply fun to read. On days when I need a laugh, I like to peruse review titles for a specific work. Take, for example, those for Love in the Time of Cholera: “Florentino Loves Femina” (San Jose Mercury News), “Love in all its macho mutations” (Chicago Tribune), “The Love-Dream of a Prodigious Sleeper (LA Times Book Review), “The Illusions and Disillusions of ‘Love’” (USA Today), “51 Years of Delayed Gratification” (San Francisco Chronicle), and on and on. 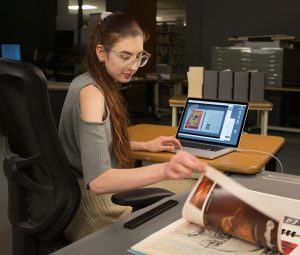 Celia Shaheen is imaging the scrapbooks for the Gabriel García Márquez online archive (a project funded by the Council on Library and Information Resources) and she has become intimately familiar with their contents. She talked with me about the challenges of capturing the books’ three-dimensionality for the web, and what they taught her about Gabo.

Can you describe the physical scrapbooks? What do they contain, and what are they like structurally?

The Gabriel García Márquez archive contains 22 scrapbooks that include articles, clippings, and miscellaneous ephemera by and about García Márquez and his works. Three of the scrapbooks are devoted to the individual novels El amor en los tiempos del cólera (Love in the Time of Cholera), Cien años de soledad (One Hundred Years of Solitude), and El general en su laberinto (The General in His Labyrinth), and one scrapbook contains materials exclusive to Gabo’s autobiography, Vivir para contarla (Living to Tell the Tale).

Five scrapbooks are dedicated to clippings, original spreads, and photocopies of interviews, stories, articles, and passages by and about García Márquez from newspapers across the globe. Materials in these books are sourced from Japan, Colombia, France, Mexico, Argentina, Brazil, Cuba, Chile, Peru, Venezuela, Spain, Italy, Germany, Belgium, and the United States. Other scrapbooks, labeled and unlabeled, are devoted to press releases, reviews, Gabo’s Nobel Prize award, and magazines that the author frequently contributed stories and articles to.

All but five of the scrapbooks are spiral-bound with plastic covers, with some titled on the front covers with adhesive labels. Four books are bound with screw posts and have cloth or plastic-covered board covers, and one scrapbook is held in a three-ring binder. The binder, titled “La Jirafa, por Septimus,” is the earliest of the scrapbooks (with newspaper clippings from 1950–1952) and features an embossed giraffe on its leather cover.

Unlike the manuscripts and photographs in the archive, which were digitized using Epson flatbed scanners, the scrapbooks were photographed in the Ransom Center’s photo studio using a Nikon D800 and studio lighting. The images were then processed through Adobe Bridge and Photoshop for re-formatting, cropping, and appending metadata. All of the scrapbooks that weren’t spiral-bound were removed from their covers and unbound, so that each page, spread, and piece of ephemera (such as loose stickers, posters, and press release items) could be individually photographed. After I photographed them, the bolted scrapbooks were re-bound with better-fitting bolts by the Ransom Center’s preservation and conservation division.

At the beginning of my work on the project, I was exclusively digitizing manuscripts. When I began working with the scrapbooks, I knew I wanted to approach the documentation differently, since I was dealing with materials that I viewed as more three-dimensional. The images of scrapbooks that are photographed in a lab or studio have more of an object-like quality than manuscripts or photograph images produced by a scanner; the scanner creates a flatter image, while photos in the lab lend themselves more to viewing an object in relationship to the space it’s occupying. So the decisions I made when photographing the scrapbooks came from a place of viewing them as three-dimensional objects rather than documents. This is why, for example, the front and back covers of the scrapbooks are documented. There are also instances where one page of a book has multiple images taken of it, where the differences in the images lie in what information is revealed or obscured by elements being tucked away or unfolded.

Many of the scrapbooks contain entire sections from magazines, newspapers, and printed packets from online articles that are glued into the books; many more include foldouts and clippings that are strategically laid on top of one another, making the structure and layout of the scrapbooks at times intricate and exciting to navigate (if you don’t look under every page or investigate every fold, you just might miss something). The contents of the scrapbooks can present some similar surprises, especially when looking through books that aren’t devoted to a specific work or type of material. Some interesting things get tucked away in there, including a German poster of Gabo that was so large when completely unfolded that I had to drastically change my set-up in order to photograph it.

The German poster is so visually striking. What else made an impression on you? Did you come across anything particularly surprising or noteworthy?

Yes, that poster is loaded with great images! There are some childhood photos, a fragment of an edited manuscript, a picture of Gabo with Plinio Apuleyo Mendoza, and a photo from his Nobel Prize acceptance ceremony in 1982 that’s quite powerful—his shoulders are squared and pushed back, his chest jutting out a bit; it’s a very strong pose.

There’s one scrapbook that contains several editions of the New York Times Book Review Bestseller List from 1988, the year that Love in the Time of Cholera was published in English. Gabo’s novel is listed alongside works like Toni Morrison’s Beloved, Danielle Steel’s Zoya, Michael Jackson’s autobiography, Moonwalk, and the Donald J. Trump biography Trump: The Art of the Deal. The same scrapbook also contains clippings and photocopies from some Texas publications, including the San Antonio Express, the Dallas Morning News, and The Austin Chronicle.

Some of the unique materials I’ve found are a promotional card (about the size of a postcard) and an accompanying sticker from the German publishing house Kiepenheuer & Witsch, for their translation of Love in the Time of Cholera (Die Liebe in den Zeiten der Cholera). The sticker reads: “Nothing in this world is more difficult than love” and is illustrated with a cupid figure that appears on the front cover of the book.

The scrapbooks’ more surprising contents are tucked away in one or two books, containing front covers and excerpts from issues of Playboy magazine that include interviews with Gabo as well as reprints of his short stories “Miss Forbes’s Summer of Happiness,” “The Trail of Your Blood in the Snow,” and “The Handsomest Drowned Man in the World.”

What did the scrapbooks tell you about García Márquez–as a writer or as a man–that you didn’t already know? Did they give you a new perspective on him or his work?

Early on in the project, I learned that many of the scrapbooks were compiled by Gabo’s wife, Mercedes Barcha (with others put together by his assistant, and one Nobel Prize–themed scrapbook assembled by Fernando Jaramillo E.). This sweet anecdote has been something I’ve carried with me as I photograph, and it’s often one of the first things I share when talking about the books. Flipping through the scrapbooks, you see that there’s often a deliberate effort to place as many materials within the pages as possible, with many books containing spreads that have been stapled and folded, pages clipped and stacked to maximum capacity. While the meticulous nature of the books surely speaks to the breadth of Gabo’s critical acclaim and his vast, international reach, the effort to organize and catalog these materials also reads as a gesture of great care and commitment. The quantity and variety of press materials within the scrapbooks reveal much about the author’s highly expansive, successful career, and also ground Gabo within the contexts of marriage and family, separate from notions of genius or celebrity.

The Gabriel García Márquez online archive, which will include more than 24,000 digitized pages of manuscripts, scrapbooks, photographs, notebooks, and ephemera from the author’s physical collection, will be available for viewing online December 1, 2017.

Jullianne Ballou is a project librarian at the Harry Ransom Center.