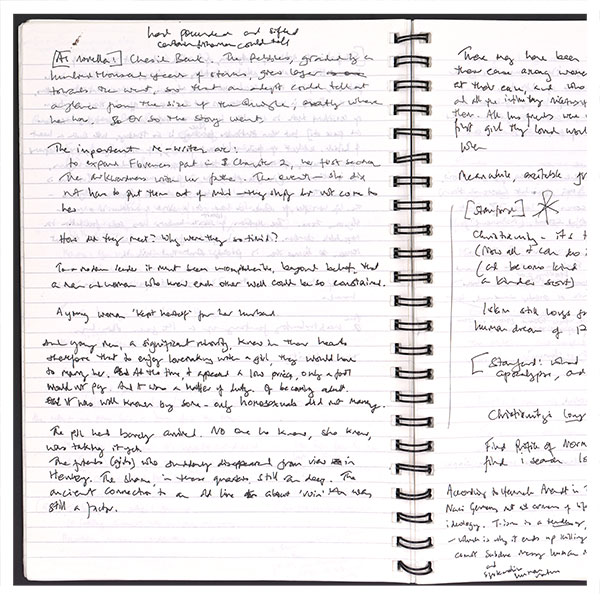 The Harry Ransom Center spoke with Ian McEwan in 2014 about archives, contemporary British fiction, science and the humanities, and where to find paradise on earth. McEwan’s archive is accessible at the Ransom Center.

Will your archive teach us anything about your work that we don’t already know?
Certainly. First, the various drafts associated with each work will show any interested reader how ideas evolved towards their final form. The writer tends to forget rapidly the routes he or she discarded along the way. Sometimes the path towards a finished novel takes surprising twists. It’s rarely an even development. For example, my novel Atonement started out as a science fiction story set two or three centuries into future.

Secondly, there’s a fair amount of biographical material in this archive. I’m not the sort of writer who makes instant use of his own life for material to be transcribed immediately to fiction. Updike is a supreme example of that. My fiction is, to borrow that writer’s fine phrase, displaced by “a knight’s move” from my life. I think the archive will show these tenuous connections.

Have you ever used archives while researching for any of your works?
Yes. For my TV movie The Imitation Game I made use of the archive of the Imperial War Museum in London. I used the same source for Atonement—I relied heavily on the unpublished papers and journals of soldiers in the retreat from Dunkirk. And I drew from various unpublished letters written by nurses who treated soldiers injured during that retreat.

What do you consider the value of archives?
I was recently awarded the (Oxford) Bodleian medal. After accepting it, I was shown some of the items in their extensive historical archives. It was deeply moving, to hold in my hand a notebook of the 17-year-old Jane Austen. And then, to turn the pages of Kafka’s first draft of Metamorphosis. An archive takes you right to the heart of the literary creation; it makes for an emotional connection that anyone who loves literature will understand. The experience is almost sensual. Beyond that, of course, critical and biographical work on writers is completely dependent on the resources of a world-class archive collection like the Ransom Centre.

Could you comment on what seems to be a special time for British fiction? How would you explain this creative flowering?
Well, assuming you’re correct; partly, I suppose, inward immigration from all corners of the old empire has helped to reinvigorate the language. Partly too, a younger generation, traveling widely, absorbing all kinds of influences, has been able to break free of the rather moribund provincialism of earlier generations. Also, in the last 30 years, British writers have been able to make use of a modernist and post-modernist aesthetic, without feeling trapped by it, as they have tended to be in continental Europe. In other words, the nineteenth century virtues of storytelling and the creation of plausible character have somehow been retained.

What may readers expect from your forthcoming novel The Children Act?
It’s about a judge who has to decide the fate of a Jehovah’s Witness teenager who, because of his faith, is refusing the blood transfusion that would save his life. 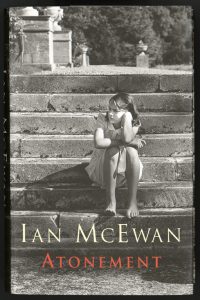 Your novel Atonement is told from the perspective of Briony. How were you able to so masterfully portray the emotions of a female, and indeed, at several different ages in her life?
Apart from knowing a number of women and girls of all ages rather well, I think it’s worth remembering that entering the minds of others is one of the routine practices of novelists. The minds of other men are just as close or remote to me as the minds of other women.

Our culture sometimes thinks of the humanities and sciences in opposing terms, but your novels take protagonists into scientific realms. Can you comment on this split in our culture and how you have addressed it in your novels?
The universities have a lot to answer for in maintaining this division. We all need an integrated education. The two sides have a lot to learn from each other. For those of us in the humanities faction, there is so much now that is exciting and challenging about the biological sciences particularly, and much that could reinvigorate our understanding of human nature, which is integral to the study of the creative arts. We liberal-arts-know-nothings need a good workout with maths and physics to discover what true intellectual difficulty is like. For their part, scientists need to draw on the fabulous and beautiful heritage of the arts—what has been imagined about our condition over the centuries is a vital resource. Also, science needs to cultivate and honour its own scientific literary tradition; from Leonardo and Francis Bacon to E. O. Wilson and Steven Weinberg, scientists have written exquisitely about the world we share. Also, young scientists need to learn how to communicate clearly, and studying an essay-based subject like history or English would be a vital training in ordering and articulating ideas.

Is there a literary character you feel akin to?
I feel drawn to Levin in Anna Karenina. His love of open spaces, urgent discussion, and domesticity is one part of it. His capacity for happiness, and his close charting of his own emotional shifts—these are attributes I admire.

How does your hobby of hiking affect your writing process? What has been your favorite place to hike?
Long hikes empty the mind. I try not to think too much about writing (though that’s not always possible) and let myself be absorbed by the genius of the place. Hikes are means of being drawn entirely into the present, of being reminded that, for all our reasonable anxieties about environmental degradation and climate change, the earth remains a beautiful place, and to cross it on foot is a privilege and a joy. As for favorites—almost too many to mention. The Alps, the Lake District, the Big Sur and Ventana wilderness, New Mexico, Arizona, Joshua Tree National Park, the Cevennes, the Cascades, the Chilterns of southern England, Corsica, North West Scotland… paradise is on earth and is available to all.