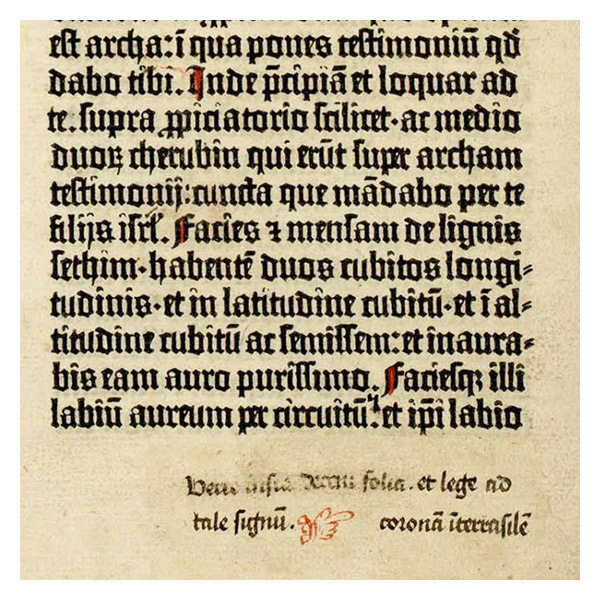 When Johann Gutenberg and his team published their Bible in the mid-1450s, what they were selling to buyers were sets of sheets, sheets of either paper or parchment that had text printed on them. What they were not selling were books—not, at least, if we take “book,” as we usually do, to imply a codex that is ready to read by turning a series of leaves held together at one edge. As I have written before, when a monastery, church, or private individual bought a Bible from Gutenberg, they had to find a scribe to add red text to spaces that the printers had left blank. Gutenberg’s customers had to find bookbinders, too.

Like the manuscript volumes that existed before (and alongside) them, the earliest printed books in Europe were made by bringing sheets of paper or parchment together into a series of folded units called gatherings, or quires. Bookbinders were responsible for ensuring that quires were correctly assembled and in order before sewing them onto supports and (usually) adding covers.

In this opening from the Book of Exodus, one quire ends with the page on the left and another begins with the page on the right. Notice, though, that there is nothing printed on either page to indicate that the one quire should follow the other—other, that is, than the biblical text itself. Not too long after Gutenberg, printers would begin printing signatures on leaves to help with ordering, but here, with one of the first pieces of European print, it remains unclear exactly how the binder was to know that the quire beginning with “coronam interrasilem” should come after the one that ends with “et ipsi labio.”*

Indeed, as a handwritten note at the bottom of the page on the left tells us, at least one binder taking on the Gutenberg Bible made a mistake. In translation, the note reads:

Turn ten leaves forward, and read to the sign, ☞, [where the text will begin] coronam interrasilem.

Today, the symbol and correct text are on the facing page, but this and two further notes tell us that an earlier binder had flipped two quires: the Bible’s sixth quire was once bound before the fifth, not after. The first note, at the end of the fourth quire, says to skip past the ten leaves of what should have been the sixth, to reach the beginning of what should have been the fifth, the one that starts with “coronam interrasilem.” Then, at the end of that quire’s ten leaves, another note instructs the reader to turn back twenty leaves to the beginning of the quire that they had skipped before:

At the end of the sixth quire, there is final note instructing the reader to skip the ten leaves of the next one, which they had already read, arriving at the beginning of the seventh:

Once the mistake had been rectified and the notes were no longer needed—probably in 1600, when this volume was rebound—someone pasted paper slips over at least two of them. Later, these slips fell off or were removed, revealing part of this Gutenberg Bible’s early history.

* Some copies of the Gutenberg Bible with minimally trimmed leaves preserve handwritten quire and/or sheet numbers, but we do not know whether these were added in the printing house or after sale by someone with knowledge of the Latin Bible. (For this information I would like to thank Eric White, Curator of Rare Books at Princeton.)