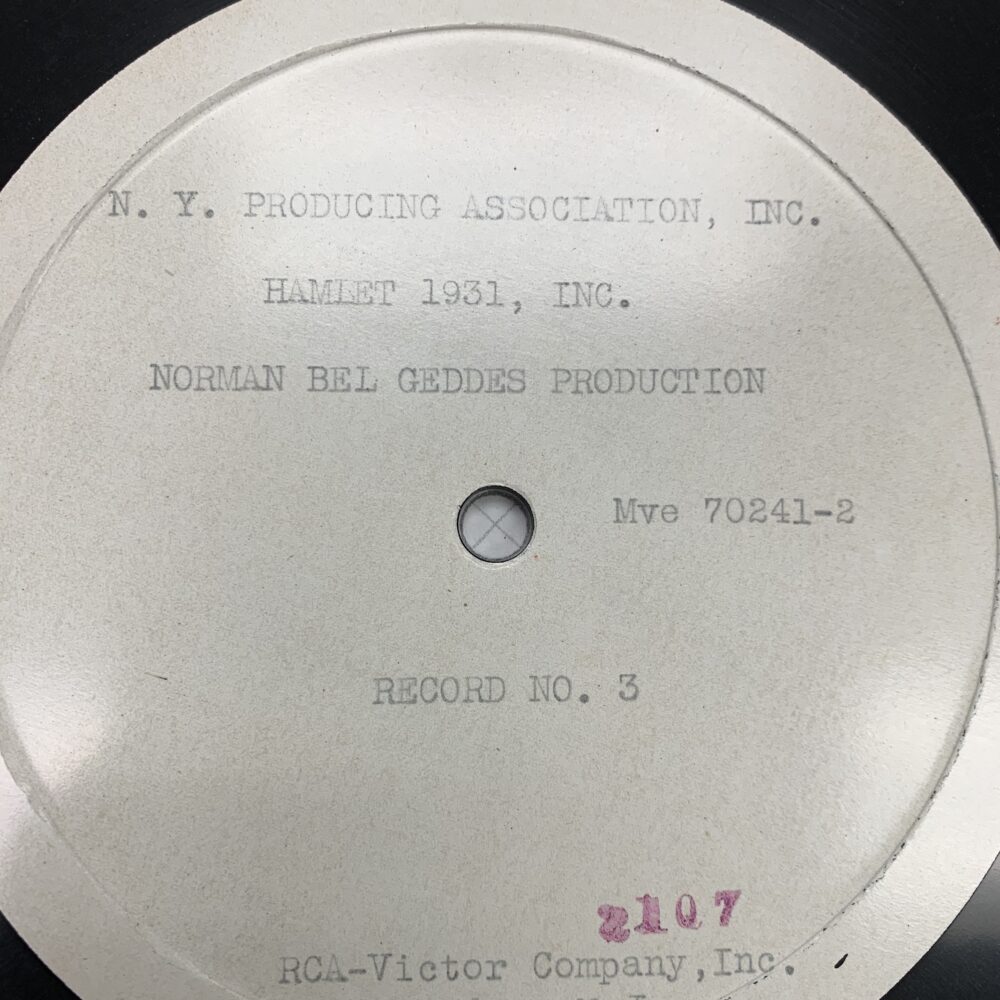 Recordings of T. S. Eliot, Paul Bowles, Pablo Picasso, and other notable 20th-century figures have been preserved after the Harry Ransom Center recently digitized 2,800 unique sound recordings in a variety of formats (read more here). Unlocking Sound Stories, a project funded in part by a generous grant from the National Endowment for the Humanities is preserving and providing access to 2800 recordings (click here for more on the grant ). Among the sound formats preserved were cassette tapes, reel-to-reel audio tapes, and phonograph discs.

About 30 of the phonodiscs required development of custom archival housing to prevent further damage during storage. These phonodiscs included recordings of T. S. Eliot reading his poems “The Hollow Men” and “Gerontion,” the N. Y. Producing Association’s 1931 production of “Hamlet,” and Paul Bowles’ operetta “The Wind Remains.”

During processing, it was discovered that some of the phonographs had previously suffered damage.

Senior Preservation Technician Alan Van Dyke designed a housing that would protect each disc from further deterioration when stored or handled. The discs were either intact, cracked, broken or shattered, and all were vulnerable.

Each phonograph required a 20” x 20” support, lid, and tuxedo box style wrapper so that each disc had proper space, support, and protection in storage.

The completed housing design protects against abrasion as the phonograph sits on a stiff base, is held in place by a small spindle and covered with a lid that does not touch the disc. It can be opened and the phonograph easily removed without any additional pulling or awkward maneuvering.

Three layers of conservation corrugated board were cross-grain adhered with PVA adhesive and put under weights for 24 hours to dry flat.

Different materials were tested and a decision was made to use a piece of B-Flute corrugated board for the lid. To create each uniquely sized cut-out, the center of the board was marked and a circle was scored with an oval and circle matte cutter, allowing for a 1/8-inch gap between the edge of the phonograph and the cut-out.

After the triple layer base was dry, the phonograph was placed on the board and marked the center. This mark indicates where a tightly rolled strip of Permalife paper (or “spindle”) will be placed later on to keep the disc securely in place.

Next, the lid was hinged to the base with an acid free gummed linen tape. The lid consisted of one 20” x 20” B-flute corrugated board glued onto the corresponding phonograph’s cut-out.

To help the lid stays securely closed, the phonograph housing was wrapped in a 20 point lignin-free paperboard, much like a tux box wrapper. Once the wrapper was adhered and dried under weights, the phonograph was placed inside. The housing was then labeled and placed in storage.

A modification was made for extremely fragile and/or shattered records which could not be handled. This design was created after consulting Associate Archivist for Recorded Sound Brandon Burke at the Hoover Institution Library and Archives at Stanford.

The octagonal tray serves to keep loose pieces secure within a sink mat. The tray can be lifted out of the sink for access, but so the object won’t be touched. Like the other phonographs, the sink mat housing is standard to the intact phonograph so all items can be stored together, preserving the materials for the future.

Chloe Gise is a Preservation Technician at the Harry Ransom Center.