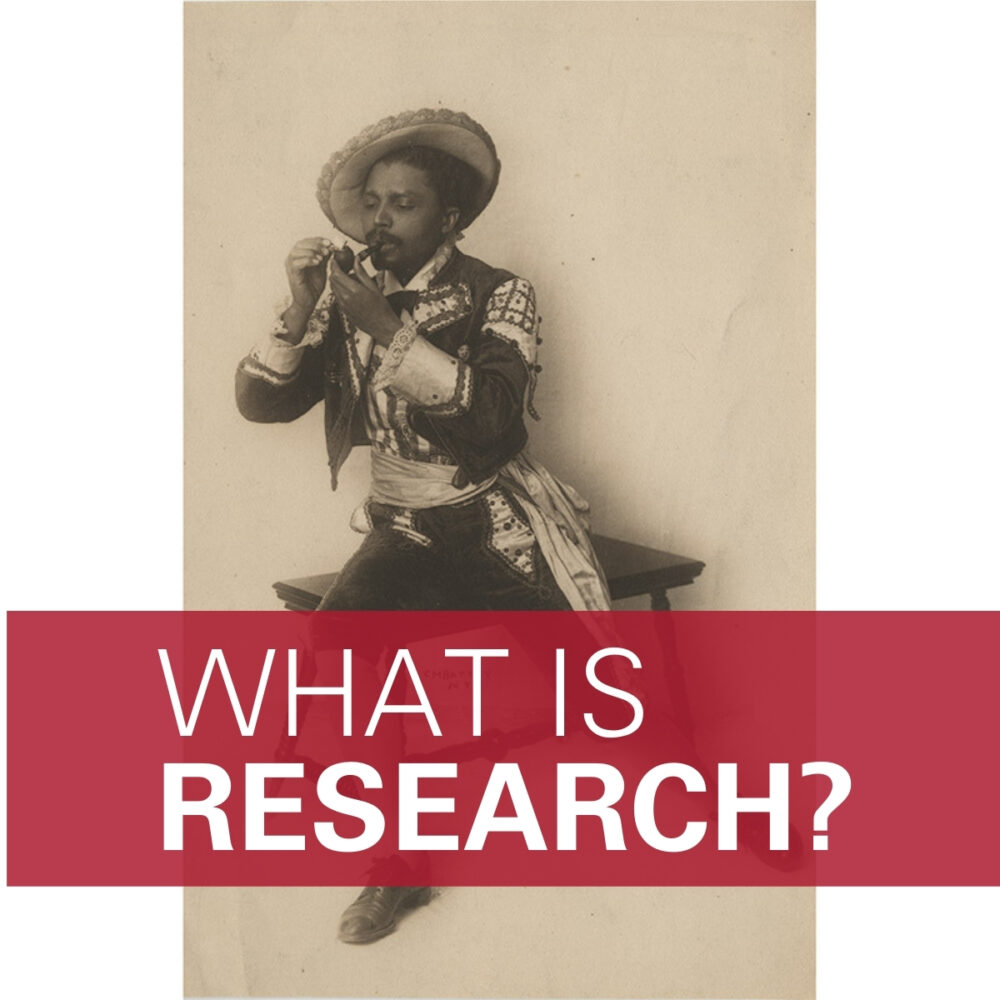 by JENNIFER M. WILKS
This essay is part of a slow research series, What is Research? Learn about the series and click here to add your voice to the conversation.

My latest fascination with Carmen began 14 years ago, when I was spending a semester in Paris on a faculty exchange. The night before leaving for spring break, I went to see Mark Dornford-May’s 2005 film U-Carmen eKhayelitsha at L’Arlequin, a grand cinema on the rue de Rennes. While in college I had seen both Otto Preminger’s 1954 Hollywood classic Carmen Jones and a Washington National Opera production of Carmen, and I was curious about how the story would translate to a contemporary African context.

In brief, my mind was blown. The sight and sound of Black South Africans singing to Bizet’s score in Xhosa, one of the principal languages of the southern Cape, while moving about Khayelitsha, a township near Cape Town, was stirring. I could, and at times did, comfortably mouth the words of the nineteenth-century French libretto while watching this vibrant cinematic portrait of twenty-first century South African life. The exhilarating mix of cultures—a South African adaptation of a French take on Spanish society—left such an impression that I dedicated my 8 April 2006 journal entry to U-Carmen and concluded with the following line: “Maybe Diasporic Carmens should be my next project.”

Two years later, when the time came to choose what research to pursue on the other side of tenure, I had my answer. I wanted to explore why there were so many adaptations of Carmen, and why so many of them featured characters of African descent. The fact that a story that (mis)represents a diasporic population—the Roma community to which the title character belongs—has generated its own diaspora, a scattering of works that transcend time, place, culture, and form, fascinated me.

Although now one of the most frequently performed operas in the world, Carmen had its own winding path from idea to fruition. The character and story first came to life via the 1845 novella of the same name by French author Prosper Mérimée (1803-1870). Mérimée’s tale appeared in the Revue des Deux Mondes (Review of Two Worlds), a periodical that entertained readers with accounts of “exotic” people and places. If Mérimée’s words gave birth to Carmen, the figure became iconic through the music of Georges Bizet (1838-1875) and libretto of Henri Meilhac (1831-1897) and Ludovic Halévy (1834-1908). Nonetheless, the composer and librettists had no indication of what a lasting impact their work would have. The opera opened in Paris on 3 March 1875 to uneven reviews, three months later Bizet died of a heart attack at the age of thirty-six, and what is now considered his masterpiece only received its due in France with an 1883 revival at Paris’ Opéra-Comique.

While my research questions around this diasporic opera were complex, my research trajectory seemed clear. Given the importance of Mérimée and Bizet to my project, the Bibliothèque nationale de France (National Library of France), whose holdings in literature, performing arts, and opera are spread across three Parisian sites, was a natural first step.

As my research continued, I selected additional places to visit. After deciding to write about Harlem Renaissance author Claude McKay’s 1929 novel Banjo—in which characters witness a spontaneous performance of Carmen—I added the southern French city of Marseille to my research itinerary. I had already consulted McKay’s correspondence about the novel, which he finished while living in France and Morocco, in the William A. Bradley Literary Agency Records at the Harry Ransom Center, and I wanted to see the place that inspired McKay and the work that can be described as his literary love letter to the African diaspora. Lastly, in order to gain my own understanding of the culture, history, and topography of Seville, Carmen’s principal setting, a trip to Spain also seemed in order.

What I did not envision was that I would still be working on the book in 2019 or that one of my most exciting research finds would involve a return trip to the Ransom Center. What happened along the way? There have been multiple iterations of the project, from an early version that included a chapter on Spain to the most recent, which examines Carmen adaptations set in Cuba instead. I had to grasp how to situate Prosper Mérimée and Georges Bizet, two giants of nineteenth-century French culture, within the book in a manner that is substantive but not outsized. And I needed to educate myself, a scholar trained in African American, Caribbean, and Francophone literary and cultural history, in order to write responsibly about works that span five languages, four genres, and three centuries.

It was while exploring the history of African American women who had performed as Bizet’s heroine that I encountered the scholarship of musicologist Kristen Turner, and Turner’s work introduced me to Theodore Drury (1867-c.1943). His namesake opera company presented a fully staged version of Carmen with an African American cast and conductor in New York in May 1900. As I scrolled through Turner’s post on Musicology Now, the American Musicological Society’s blog, I was captivated and then froze when I saw the second image embedded in the text: it was a photograph of Drury, and the caption read “Theodore Drury as Escamillo — c. 1905, Harry Ransom Center, University of Texas at Austin.” There had been an early twentieth-century African American impresario who produced an all-Black Carmen, and photographic evidence of his work was housed at the archive a mere five-minute walk from my office?

Had I not taken the time to engage with musicological scholarship, I might never have heard about Drury, whose project of using opera to advance African American civil rights now plays an important role in my book.

The undated black-and-white photograph is deceptively simple. Inscribed with “Theodore Drury as Escamillo” on back, the image depicts its model perched on a bench, clad in “Spanish” garb. His body is turned slightly away from the camera, his eyes focused on lighting the pipe cradled in his left hand. The spare setting allows the details of Drury’s costume to stand out: pitched at a jaunty angle, his hat is adorned with thick braided trim. His dark bolero jacket is decorated with embroidered lapels, its shoulder panels and wide cuffs festooned with embroidery and lace. A wide, glossy sash cinches Drury’s waist before the splendor clothing his upper body gives way to plain dark breeches, medium-colored stockings, and simple black shoes.

I was captivated and then froze when I saw the second image embedded in the text: it was a photograph of Drury, and the caption read “Theodore Drury as Escamillo — c. 1905, Harry Ransom Center, University of Texas at Austin.” There had been an early twentieth-century African American impresario who produced an all-Black Carmen, and photographic evidence of his work was housed at the archive a mere five-minute walk from my office? Had I not taken the time to engage with musicological scholarship, I might never have heard about Drury, whose project of using opera to advance African American civil rights now plays an important role in my book.
—JENNIFER WILKS

In scanning the photograph, discerning eyes might also catch the name and place printed in the space between the seat of the bench and its long cross-bar: “CMBATTEY / NY.” But other details are lacking. Who was Theodore Drury, and why was he dressed as Escamillo, the seductive bullfighter from Carmen? Who was C. M. Battey, and how did they come to photograph Drury? I have found answers to three of these four questions in the year and a half since first viewing the photograph, and the process has reminded me that, while interdisciplinary inquiry is an endeavor that can be marked by frustrating delays, it is also one that can yield felicitous discoveries.

In researching the Drury image, I learned that C. M. Battey (1873-1927) was a prominent African American photographer who shot portraits of luminaries such as W. E. B. Du Bois (1868-1963) and Booker T. Washington (1856-1915) as well as numerous covers for the NAACP magazine Crisis. I have yet to learn how Battey’s work landed in the Albert Davis Collection, now housed at the Ransom Center, and I would not have been able to locate the image there without the assistance of two of the Center’s Research Associates, Linda Briscoe Myers and Cristina Meisner. I am now on course to finish my manuscript next year so will leave the Battey-Davis question to someone else. May whoever takes up this and other scholarly mysteries have the patience for, and enjoy the pleasure of, slow research.

Jennifer M. Wilks is an associate professor of English, African and African Diaspora Studies, and comparative literature at The University of Texas at Austin, where she directs the John L. Warfield Center for African and African American Studies. Her cultural history of Carmen adaptations set in African diasporic contexts is under contract with Oxford University Press.