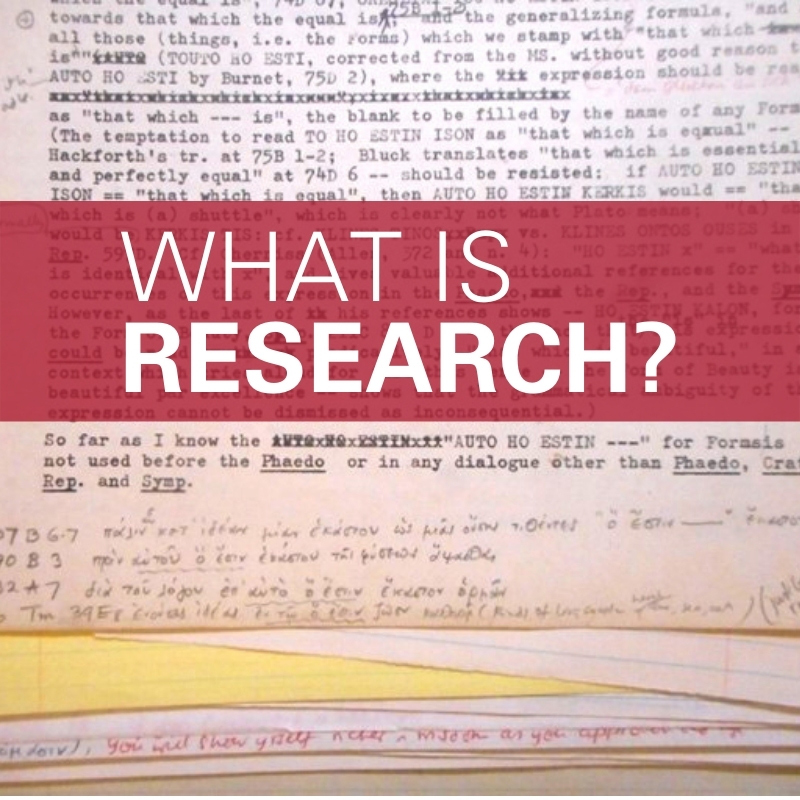 by CELSO VIEIRA
This essay is part of a slow research series, What is Research? Learn about the series and click here to add your voice to the conversation.

Wonder: that is the starting point of philosophy, according to Plato. Myths capture our attention by telling wonderful stories. Philosophers, however, look for hidden wonders disguised in platitudes. Can you tell what the verb ‘to be’ really means every time we use it? Of course, there also is room for the wonderful stories in philosophy. Humans are storytellers, after all. The orphic tradition portrays the search for knowledge as a descent into the depths of the underworld. They might even have influenced Plato when he writes that doing philosophy is learning how to die. Whether we are attracted by the wonderful or the disguised wonders, for Aristotle all intellectual endeavors share the same origin: our natural desire for understanding.

Wonder, depth, and understanding mark three useful reference points to think about what is research in any field. In his Poetics, Aristotle acknowledges that imitation might be the more basic and pleasurable form of learning. Nevertheless, we are not very good at imitating final products or accomplishments. Any kid who disassembled a toy in the hope of understanding how it works and never succeeded in putting it back would agree. Humans are social animals and, as such, we are better at imitating people, including imitating people making things.

Our predisposition towards the imitation of actions, not things, may explain why the orphic journey into the depths is not an individual endeavor. The narratives usually include the companionship of an in-between entity such as a dead poet or a lost beloved who guides a daring adventurer. Add companionship and imitation to the notions of wonder, depth, and understanding, and we have the ingredients for what is doing research at the Harry Ransom Center.

As the reader might have guessed, I work with ancient philosophy. In my two stays at the Ransom Center, I had the opportunity to dive into the Gregory Vlastos Papers. Vlastos was a historian of philosophy who worked mainly with Plato. One might wonder what he accomplished for his documents to live under the same roof with the likes of Gabriel García Márquez and e.e. cummings. Vlastos was a pioneer in a movement that revolutionized the way we engage with ancient texts by applying a more analytical approach to the task.

During my research visit to the Center, I witnessed how his initial notes in the margins of a Greek text became a compendium of related passages and sparse thoughts in a ringed binder. The most promising were then formalized in quasi-logical arguments, revised and restated before becoming a working hypothesis. Exploring his archive felt like I had gained access to the still-frames of Vlastos’s working process. He would circulate rough drafts of his papers by mail. The archived letters from his peers unravel stories of failures, objections, and corrections that were determinant for his interpretation of Plato. Yet these processes would be inaccessible if only his finished books and articles remained.

Research into philosophical texts, when they are so distant in time, requires a lot of effort to identify and make sense of implied assumptions. Imagine if you were to open a letter with the following sentences and a prompting question:

(a) The bed in Van Gogh’s painting Bedroom in Arles.

(c) The paradigm of a bed in the head of a carpenter while making a bed.

Which of these beds would you declare to be real?

The sleepy reader, eager to take some rest, would certainly say it is (b). If we are comparing (b) and (a), Plato would agree. However, the wording he would use to do so might shake the reader out of their somnolence. After all, Vlastos was not the only reader astonished by Plato saying that the bed is more real than the painted one. His wording implies, at least, that:

i) the painted bed is real

In philosophy, the easiest comes first. I bet the Magritte reader can already explain how a painted bed can be real. It certainly is not a real bed, but it is a real painting, nevertheless. What underlies the position of the sleepy reader is the assumption that to exist is to be a physical object. The Magritte reader, on the other hand, takes ‘being real’ as an incomplete predicate, that is to say, a predicate that needs a complement to make sense. If so, judging what is real requires clarification about the domain of the investigation. If the question is about being a painting, (a) is real. Usually, we do not even realize that being real is an incomplete predicate because the context supplies the information to complete it. For instance, the somnolence conveys to the sleepy reader the need for a bed in which they can sleep.

The archives at the Ransom Center reveals that Vlastos, at first, followed the reading of G.E.L. Owen. He explained the unusual wording in Plato through the notion of an incomplete predicate. Research may well demand a guided dive into the depths of a question, but some rebellion against the guide is also necessary. Otherwise, repeating the same path to arrive at the same results would not be justifiable.

Imagine my excitement when I found a note by Vlastos revealing his breakout moment. At a certain point, he writes at the margin of a paragraph, it would be a “child’s play” to try to explain away Plato’s weird treatment of reality through the notion of incomplete predicates. [i] For Vlastos, at least from that moment on, understanding Plato’s position required making sense of the degrees of reality in the implication (ii) above.

Thinking about the relations between the beds under analysis may indicate a way out. The bed in Van Gogh’s room served as a model for his painting. Would you then be prepared to accept that, based on this criterion of priority and not on its physicality, the bed in his room was more real than the painted one? Plato would bet you would agree without giving much importance to the implications that follow. But, if so—and that is why we should wonder about seeming platitudes—by the same criterion, the paradigm of a bed in the head of the carpenter should be more real than the bed he produced. The conclusion seems to follow, yet it still feels counter-intuitive.

By thinking about these relations at the same strike, Plato not only realized that things might exist without being physical entities as supposed by the sleepy reader but also concluded—to the surprise even of the Magritte reader—that the non-physical might be more real than the physical ones. The first theory of abstract objects in the western tradition was born. To assess its novelty, I ask all the readers to be careful. Plato did not propose a theory of mental entities, that is, of things such as conceptions that exist in the mind of conscious beings. In a theory about abstract objects such as numbers and Platonic forms, the entities exist outside space and time and possess their properties independently of human minds.

Vlastos, in his interpretation, proposed a justification for why abstract objects are more real than the physical ones. While the relations between the parts of a concrete bed are subject to all sorts of imperfections and changes, the relationships between the parts of abstract objects as the sides of a rectangle would hold eternally. Here is a bed you cannot sleep on, but you can definitely trust!

Exploring his archive felt like I had gained access to the still-frames of Vlastos’s working process. He would circulate rough drafts of his papers by mail. The archived letters from his peers unravel stories of failures, objections, and corrections that were determinant for his interpretation of Plato. Yet these processes would be inaccessible if only his finished books and articles remained. Research into philosophical texts, when they are so distant in time, requires a lot of effort to identify and make sense of implied assumptions.
—CELSO VIEIRA

This brief outline brings us back to wonder. Scholarship is much more than its already impressive tangible outputs. The archives at the Harry Ransom Center help us see how much work underlies the process of research, in particular, in the humanities. For an in-depth examination of how Vlastos would produce an article based on his archive, I refer readers to an article I wrote based on my visit to the Ransom Center: “Scholarship in Process, A Reconstruction of Vlastos’ Method into the History of Philosophy.”[i] As for my breakout moment, one will have to wait for a forthcoming piece.

[1]  Vlastos makes the point in a handwritten note: “Would be child’s play to resolve the problem by treating ‘real’ as an incomplete predicate. Then: the maker does not make what is really the (character/ Form) bed and only makes what is really the instance of the Form. Something which has that form.” In Celso Vieira, “Scholarship in Process, A Reconstruction of Vlastos’ Method into the History of Philosophy,” Elenchos 40, no. 2 (2019): 459.

We have seen that support and guidance are necessary for good research. Thus, I want to thank the Ransom Center staff for their incredible dedication in helping researchers and visitors alike. I also have to express my gratitude to Professor Mourelatos (UT). Our discussions about Vlastos and his Archive motivated the composition of the article revealing Vlastos’ method.

ABOUT CELSO VIEIRA
Celso Vieira is a researcher of Ancient Philosophy working mainly with Platonic abstract objects and the process philosophy of Heraclitus. He comes from Brazil and is currently working as a postdoctoral researcher at the Ruhr Universität Bochum, Germany. In between these two phases, he was a research fellow at the Harry Ransom Center.