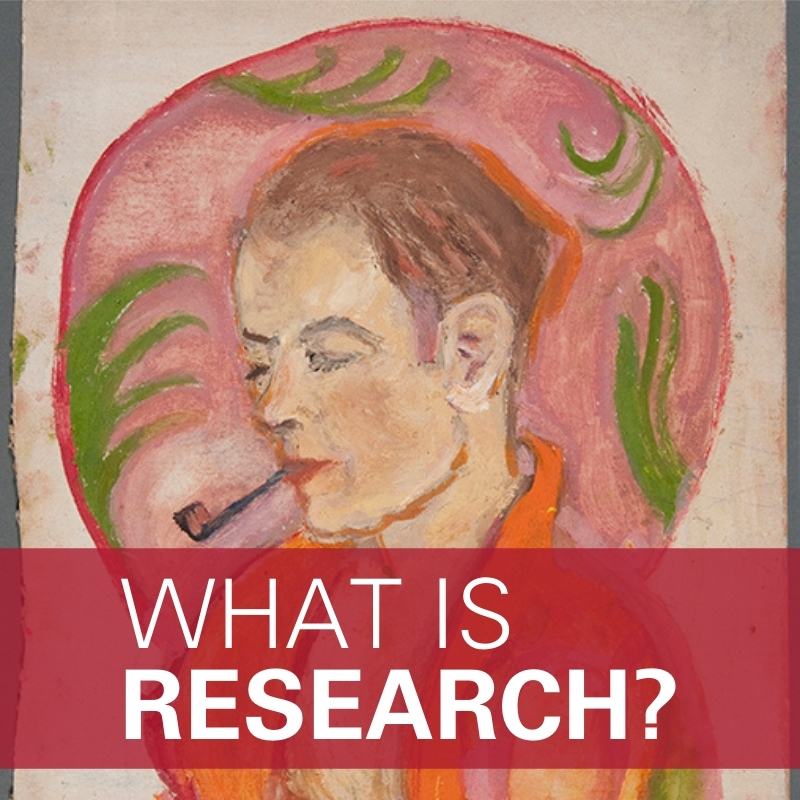 by JOHN S. BAK
This essay is part of a slow research series, What is Research? Learn about the series and click here to add your voice to the conversation.

While most scholars search for answers in an archive, others like me seek out questions. For us, discovering a mystery is as fun as solving one. Visually speaking, the first experience resembles an exclamation point, a quick and straight cut through the files to where the spot marks the x, like many an algebra equation, begs a solution; the second is a gentler promenade along the sinewy curves of the question mark, where the final point opens an inquiry more than it closes a claim. As Theodore Adorno writes of both marks, “An exclamation point looks like an index finger raised in warning; a question mark looks like a flashing light or the blink of an eye.”[1] Habitués of the Harry Ransom Center would do well to discern which punctuation mark they best resemble.

I am a Tennessee Williams scholar and, today, most definitely a question mark, but I was once an exclamation point. When I first explored the Williams collection at the Ransom Center as a graduate student back in 1990, I fleeted my way recklessly through its 31.5 linear feet; when I returned there in 2014 as a visiting Fellow, I judiciously preselected my boxes, stopping frequently amidst their fatted folders to appreciate the many Williams “roses” they contained—letters to his infirmed sister, Rose Williams; an essay about his beloved grandmother, Rosina Dakin; an early still-life of a Red Talisman rose in a blue vase. It was this last item that lured me unexpectedly down one winding path of the collection’s many question marks.

The Tennessee Williams Art Collection contains twenty-six works that the playwright painted or sketched over a span of fifty years: portraits, landscapes, caricatures, compositions, a still-life, and self-portraits. Despite its admirable efforts, the Center’s inventory of Williams’s art remains riddled with queries about a given work’s date, title, subject, even authenticity. A few works, like his first Self-portrait, do bear his full signature, and others, like the Red Talisman still-life, are authenticated by his “T.W.” initials in the lower right-hand corner. Several paintings, however, carry no such signatory proof, and none but one was assigned a definitive date of execution.

Were it not for a visit by Williams to the Ransom Center in November 1973, when he had the opportunity to disclaim paternity of a certain work, one could even question the very provenance of a few of these unsigned, undated, and untitled artworks. Given Williams’s own gossamer tie to historical fact—evinced throughout his biofictional essays and memoirs, letters, and private notebooks (originals of which are at the Center), wherein he regularly writes, à la Blanche DuBois herself, “what ought to be truth”[2]—“caution” is the watchword best privileged when cataloguing his work. Early curators at the Center clearly respected this caveat in preparing their initial inventory of the Williams Art Collection, letting brackets squat squarely where titles belong, question marks understudy for absent dates, and the word “attributed” leave ajar the door of skepticism. These metadata mysteries involving Williams’s art have intrigued me almost as much as the works themselves.

Research helps solve mysteries we didn’t even know existed. While most scholars search for answers in an archive, others like me seek out questions. For us, discovering a mystery is as fun as solving one.
—JOHN S. BAK

For years, when I was an exclamation point, I accepted on faith the Center’s accession details in my biographical research on Williams. Today, while working on a book of Williams’s visual self-portraits, my hunch was to begin questioning that inventory’s current suppositions. Having long edited Williams’s unpublished nonfiction, much of it mined from the Ransom Center archives, I learned the important lesson that the answer to a question concerning one Williams work can often be found in another.

For example, in recently determining the precise composition dates of various drafts of Williams’s “Pretentious Foreword” to his play You Touched Me!, entitled “Homage to Ophelia,” I had to piece together and decipher details gleaned from his published and unpublished letters, his notebook entries, his manuscript drafts to The Glass Menagerie, and even his short-lived contract with MGM studios.[3] Williams’s biographers, like his curators, are often hard pressed to provide definitive answers to near impossible questions, and thus forced to either accept approximations or gumshoe their way through sheaves in boxes that, laid end to end, stretch half the distance of a bowling alley—all just to establish the date of one page of one manuscript of one preface to one play. Circa is as much a biographer’s bugbear as it is a friend, or a crutch.

One service a microbiographical study such as this one can provide—putting aside the unseating of broad-shouldered brackets that bookend question marks—is to polish, distend, or even alter the accepted truths of a subject’s well-established narrative. With the help of curators Eric Colleary and Tracy Bonfitto, I recently uncovered certain microbiographical details in Williams manuscripts and realia that could reshape the Center’s inventory of the Williams Art Collection. As evidence, I offer up one brief example.

Among the paintings “attributed” to Williams in the collection is a portrait the Center tentatively identified as “[Fred Parrott?]” and cautiously dated “1939?” During the spring of 1939, Williams and his new friend Jim Parrott stayed briefly in Hawthorne, California, on a squab ranch owned by Jim’s uncle Fred Parrott and wife Adelaide, a former WPA art teacher.

During Williams’s visit, Adelaide gave Williams free art lessons, something Williams confirms in a letter to his grandmother Rosina: “Oh, yes, I’m quite an artist these days! Mrs. Parrott, who was a WPA art instructor, gave me a good start and I have completed about a dozen landscapes and portraits in oils—nearly everybody paints around here and there are a few really celebrated artists.”[4] One of those portraits from the summer of 1939 was without doubt the painting in question.

Presumably, the figure dressed in an apparent Japanese kimono was thought to be Fred Parrott because, in another letter, Williams alludes to a drunken Fred singing “O Takki” at “the top of his lungs”—“A Japanese song he learned while in the Embassy over there.” Williams then describes being saddled with the task of chauffeuring Fred around from bar to bar and keeping “him out of communication with the local police.” While Williams’s epistolary details about the couple are sparse—“They’re Eastern aristocrats gone to seed”[5]—they nonetheless provide a cardinal point from where to begin searching.

Tracking the life of a Californian pigeon farmer transplanted from the East seemed an easy enough paper trail to follow. How many Parrotts could there be in the U.S.? Strangely, a lot. The illustrious Parrott family line, from which Fred descended, extends back to Colonial times, and the aristocratic tradition of recycling surnames as first and middle names in subsequent generations resulted in several “Fred” Parrotts. Unfortunately, Jim’s uncle lived such an undistinguished life that he had left few digital footprints. One, however, proved instrumental in confirming that he was not the subject of Williams’s portrait – Fred Parrott’s middle name.

A Los Angeles phone directory from 1933 lists our subject as “Parrott Fredk T (Adelaide A) h811 E New Jersey av.” A circa 1936 letter that Adelaide wrote to Edward Bruce, director of the Public Works of Art Project, identifies Fred’s middle name as “Toscan.”[6] Armed with this detailed information, I was able to locate a brief biographical entry on Frederick Toscan Parrott in the History of Rockingham County, which notes that Fred spent “three years in Japan.”[7]

That discovery led to the following novelty souvenir photograph of Fred, circa 1906, that portrays him in full Japanese costume. Another sepia photo from roughly the same period displays a beardless Fred sporting the same brown cowlicks just above his forehead. Together, these two photos provide conclusive evidence that Fred is not the subject of Williams’s painting.

If the painting is not a portrait of Fred Parrott, then who? Returning to the Williams letters and notebooks from 1939, a more likely subject of the misnamed portrait emerges: Walter Willard “Spud” Johnson, whom Williams met later that same summer en route to Taos to meet D. H. Lawrence’s wife Frieda. On 20 August 1939, Williams noted in his private journal that “Spud puzzles me, intrigues me a little.”[8] That intrigue may have led to his photographing Spud, just as he had Jim during their bike trip along the coast. The lantern jaw, the receding hairline, even the churchwarden pipe point more squarely to Spud as the subject of Williams’s portrait.

A biography of any personality necessarily informs a reader of the major events of that person’s chosen or lived path, a highlight reel of a lifetime. And while the nature of biographical writing can evolve over time—new evidence can come to light in the archives; cultural reservations are allayed, etc.—the grand narratives of that biography’s subject often remain engraved in historiography. Those grand narratives are represented by an archive’s linear feet of boxes, folder, and papers. A microbiography, by contrast, is interested more in the marginalia found on a manuscript page, in the film clips that end up on the cutting room floor—or in a photograph.

As this short article has attempted to show, a microbiography fills in the known and the unknown gaps of a subject’s life, providing points of profound depth to the biography’s far-reaching surface, a vertical narrative to the horizontal history of biographical writing. I have recently been engaged in writing microbiographies of Tennessee Williams’s life and career, and one of the areas I have found currently worth exploring is the murky world of Williams’s life as a painter. 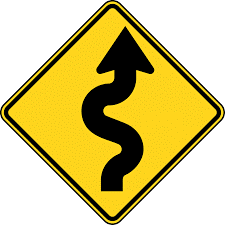 A question mark, rhetorically if not visually speaking, resembles a Winding Road Ahead signpost, where both signs are meant to warn against the hazards of twists and turns that lie ahead, and to govern unchecked speed in negotiating those potentially dangerous curves. Perhaps such a signpost should be placed outside the entrance of the Ransom Center.

John S. Bak, Professeur at the Université de Lorraine in France, holds degrees from the universities of Illinois, Ball State and the Sorbonne. A Fulbrighter to the Czech Republic in 1995, he has been Visiting Fellow at Harvard (2011), Columbia (2013), the Harry Ransom Center (2014), and Oxford (2014-16). His books include Tennessee Williams and Europe (2014), Tennessee Williams: A Literary Life (2013), New Selected Essays: Where I Live (2009), and Ernest Hemingway, Tennessee Williams, and Queer Masculinities (2009).