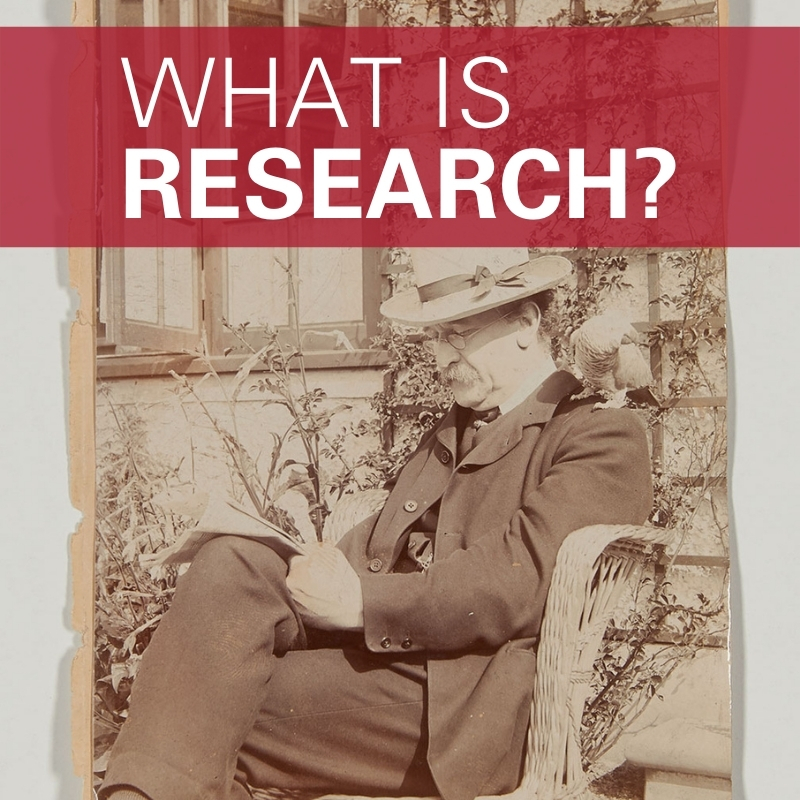 by SIMON LOXLEY
This essay is part of a slow research series, What is Research? Learn about the series and click here to add your voice to the conversation.

During my time as a researcher, I have always been a working graphic designer. I suspect that, as a consequence, my underlying mindset has always been very results-driven. As a designer, if you want to get paid, all the ends have to be tied up, all ideas followed to a conclusion. Therefore, sitting at a desk in a library, I still feel that I have to produce something that can be shown to the world, whether this be in book form, an article, or other verbal or visual presentation. Although I always really enjoy the process of research, rightly or wrongly, a product is always at the back of my mind. Investigation, then communication.

As a research fellow at the Harry Ransom Center in 2017, I explored the Sir Emery Walker Collection. Walker (1851–1933) was a key figure in the Arts and Crafts movement and in the world of printing, typography, and graphic design in Britain and beyond, during the last decade of the nineteenth and the early decades of the twentieth century.

Walker’s former home in Hammersmith, West London, can be visited, and much inside remains unchanged from when he lived there. Yet I felt he himself remained a rather elusive personality. In 2016, I had become involved with the Emery Walker Trust, designing a logo for the house, and I wanted to research Walker further and, if possible, write some sort of biography about him.
On learning of Walker’s archive at the Center, I was particularly excited by the prospect of looking at his diaries. Any wider renown attached to Walker comes through his quarrel with his former partner in the Doves Press, Thomas Cobden-Sanderson, who dumped the Press’ signature, proprietorial type into the River Thames to spite Walker. Cobden-Sanderson’s diaries had been published, but all mention of Walker had been removed, undoubtedly for fear of legal action. What interesting comment might Walker’s diaries contain?

On my first day in the Center’s reading room, the diaries were the first items I requested, and here was a lesson in not trying to guess beforehand where the ‘gold’ in your research might lie. Walker was not a discursive, autobiographical diarist. On the evidence before me, he used his diaries (and not particularly extensively) as appointment records. There was virtually no personal comment.

While there was no instant success in my research journey, no immediate cascade of riches, that was no bad thing—because research is not a fast process. The Library’s expectation was that fellows should spend at least a month in Austin. Originally this seemed to me a long time, exciting though the prospect was of spending that amount of time in Texas, a part of the United States I had never visited. However, as the Walker archive is a generous size, and the Center also holds other collections that relate to him, this amount of time was just about right.

I had previously published a biography of the American book and type designer Frederic Warde and found that, for maybe the first few days of the research process, you can feel lost in a sea of unconnected and incomprehensible facts and references. Feelings of desperation can start to seep in, a sense of drowning. It is important not to panic: keep working methodically and thoroughly, keep making notes of what you’ve read, even if at the moment you can’t quite see why.

By day three or four, things start to coalesce. References and subjects will start to recur, and the faint ghosts of patterns begin to emerge from the mists. The further you progress, the more solid these patterns become, until they assume a real significance in the narrative that you’re trying to understand. But once you reach the end of the material, you then have to go back to the beginning and go through everything again. The items you examined in the early days will take on new meaning, as you now have the knowledge to understand and assess their contents far more efficiently, an effect that will produce resonances throughout the rest of the collection. You will then find yourself re-examining some items a third or fourth time.

It was Harry Ransom’s personal belief as a collector that everything related to a subject might be relevant: telegrams, invoices, greetings cards, informal notes written on scraps, and other ephemera that might nonetheless represent pieces of the jigsaw of someone’s life. This is my philosophy, too, so I examined this level of items as well as formal correspondences.

What soon became apparent was that Walker had a wide circle of friends and contacts, both in his professional field of reprographics, but in the arts generally, and also in politics. I looked in vain for the kind of frank opinion and personal revelation that were a stock in trade for Frederic Warde as a correspondent, but Walker just wasn’t that kind of confessional writer. However, if you can judge a person by the company they keep, then I felt that much might be learned by the nature of the people who knew him, the way they addressed him, the questions they asked and the things they wanted from him.

While there was no instant success in my research journey, no immediate cascade of riches, that was no bad thing—because research is not a fast process … References and subjects will start to reoccur, and the faint ghosts of patterns will start to emerge from the mists. The further you progress, the more solid these patterns become, until they start to assume a real significance in the narrative that you’re trying to understand.
—SIMON LOXLEY

Since no one is an island, much might be interpreted by examining their relations with the people closest to them, their family. Even in a male-dominated society such as Walker lived in, decisions that were judged to be made by men alone sometimes weren’t. Their thinking and actions may well have been influenced by wives or daughters. This was clearly the case with Walker’s great friend William Morris, and fortunately the Ransom Center’s archive contained much material and correspondence by or relating to Walker’s wife, Mary Grace, and his daughter, Dorothy.

From a local stationer in Austin, I bought a pack of file cards, and on these I wrote the names of correspondents, respective dates, and a brief note on the contents. Any letter might be of interest and significance, and through this method, I could easily put “possibles” in chronological order, add others, or take some out. I had a physical, easily adaptable ready reference for the progress of my research and thinking. A viable structure now suggested itself, that I had sufficient epistolary material to create a narrative arc of the most significant section of Walker’s life, and this might give me the backbone of a book, which I could supplement with short biographies of key correspondents, and discursive sections on some of the milestone episodes of Walker’s life and career, with as much illustrative and photographic material as I could include. In this way I could present a picture not just of Walker’s work, but his life and the world that he lived in.

The way ahead was now clear. I transcribed the selected letters and, on my return to the UK, worked out a basic design structure for the book to present to prospective publishers. In a sense, the project then returned to the US, as the idea was taken up by Delaware’s Oak Knoll Press.

They also asked me to design the book. I supplemented my letters selection with some from sources in the UK, and the final selection was not entirely decided until quite late in the design/editing stage. Likewise with pictures. However late in the process, if there is something you feel deep down you should include, if you don’t, you have a long time to regret it. Of course, if you’re designing the book as well, it makes the process a lot easier—you have far more control.

Someone once said to me that “a book is just a work in progress,” and I thought afterwards how true this is. Publishers have their deadlines (and don’t trust one who doesn’t), and at some point, a line has to be drawn under any new research or conclusions. A printed book can only at best be your honest thoughts and conclusions at a point in time. Later you will find new things, and may change your opinions—more than once. If you remain involved with your subject, then research never ceases.

ABOUT SIMON LOXLEY
Simon Loxley is the author of Type: the secret history of letters (2004), Printer’s Devil: the life and work of Frederic Warde (2013),Type is Beautiful: the story of fifty remarkable fonts (2016), and Emery Walker: arts, crafts and a world in motion (2019). He is a graphic designer, teacher, and writer in the UK, where he serves as designer and editor of Ultrabold, the journal of St. Bride Library.