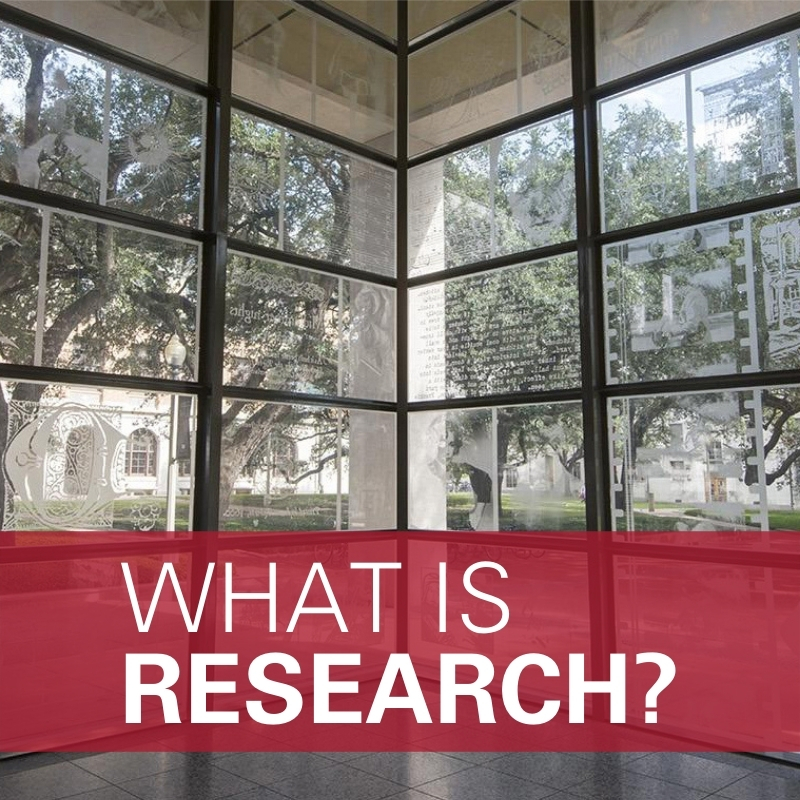 by ANNE TERRILL
This essay is part of a slow research series, What is Research? Learn about the series and click here to add your voice to the conversation.

Buildings tell stories. When Victorian-era critic John Ruskin looked at St. Mark’s Basilica in Venice, he saw a building that reminded him of an illuminated book, intended to be legible to a visitor. The façade created a space that could start doing the work of the church before the visitor even went inside; as he wrote, “both externally and internally, the architectural construction became partly merged in pictorial effect” as “a vast illuminated missal.”[1] The colors, materials, images, and ornamentation are not just objects of analysis or delight but incorporate a viewer as a participant in the building’s project and environment.

Although the Harry Ransom Center is a very different type of building, with a very different use, I am reminded of Ruskin’s sentiment when I look through its etched glass windows. The multi-storied windows capture the spirit of the vast collection within its walls, containing irreplaceable books, manuscripts marked with artists’ scribbles, sundries, magic posters, photographs, screenplays, letters, costumes, and much more. All of the slow research, study, work, and careful looking that happens on the inside of the building—in the Reading Room and exhibition spaces—are mirrored and heightened for the visitor and the passersby on the outside. The windows engage an onlooker into the experience and enjoyment of the archive: Hunting for patterns among collections. Taking pleasure in oddities and masterpieces alike. Locating meaning in unfinished and ephemeral things. Attempting to place varied cultural products in a structure and conversation.

The Ransom Center building was not always so inviting, despite Harry Huntt Ransom’s desire to make the Center’s collections accessible to students and scholars alike on campus. At its opening in 1972, the building seemed quite the opposite—foreign, inscrutable, hostile, and impenetrable. Early critics described the modern building of concrete and shell limestone quarried from the Texas Hill Country as “a big white marble box by a lover of Arab style splendor.”[2] Later reports emphasized the campus mystique that surrounded the building. In an era of “Austin weird,” the building seemed like a filing cabinet for big secrets. In 1978, Texas Monthly reported that “student rumor had it that the roof was designed for helicopter landings in times of civil disturbance, and that the elaborate and highly visible electronic security equipment was there to guard John F. Kennedy’s brain.”[3]

The building was transformed in 2003 to welcome all visitors with an updated reading room, expanded galleries, and soaring etched glass windows designed as a visual wunderkammer of the Center’s collections. The Center collaborated with local architects, designers, and a Chicago glass etching firm to produce the windows, using an eco-etching™ system where the abrasive, etching material is reused again and again without entering the environment.[4] Designer Steven Stamper described the process of putting the variety of images together as a jigsaw puzzle, “fitting the images into the shapes of the glass panels, balancing the densities, and also trying to inject a sense of humor into it by pairing images so they created a narrative.”[5] Though certainly planned on the grid of the windows, there is the feeling of spontaneity, irregularity, and surprise.

The windows have a menagerie quality—some serious and engrossing, others playful and varied. Some of the windows are taken from manuscripts including a scene from Arthur Miller’s Death of a Salesman or a typescript of Carson McCullers’s dramatization of The Member of the Wedding. Others demand attention through their stark depictions of historical suffering, like Dorothea Lange’s photograph best known as “Migrant Mother” for the Farm Security Administration and John Biggers’s illustration of Maya Angelou’s poem on “Our Grandmothers.” These windows take time to look at and study. But I am just as often absorbed by stories of my own making.

On the south window, a boy startles a rooster that chases a horse as it rounds the corner of the building. The photographs of the horse, Eadweard Muybridge’s Horse in Motion, add an element of action to three portraits of pointy-bearded author D. H. Lawrence beneath a low-slung hat, just below on the southeast window, as if they too were animated in stop motion.

Much of the movement and play in the windows comes from the materials themselves: light and glass. Glass glistens and reflects, transforms over the course of the day, and invites shadows into the building that double the images. Some of these effects were a delightful surprise to the designers themselves, who discovered that, “depending on the time of day and where the light source was coming from, the images could look positive or negative. The translucent panels allow in natural light by day, and at night, backlit by interior lights, become giant image lanterns.”[6] Not only do the images contain both positive and negative versions, the images create their own trace. They made it possible to interact with the building to create a cyanotype of an image using photosensitive paper.

With more than 100 images taken from the archives, arranged not quite haphazardly but whimsically, there are so many patterns to see and stories to tell. When I look at the windows, my eyes are first drawn to a John Tenniel illustration of Alice from Lewis Carroll’s Alice’s Adventures in Wonderland. In the novel, Alice laments that she is “opening out like the largest telescope” and has grown to nine feet tall.[7] Her neck is comically elongated. In glass, too, she’s much larger than human scale. Her body takes up two panels of windows, her body cut right in half. This Alice is a perfect foil for the early modern engraving of Vitruvius’s concept of the ideally proportioned man, which you might see if you turn the corner of the building. And the other side of the building holds another image of girlhood: two young Black women posed in the portrait studio of local Czech-Texan photographer Jno. Trlica from the John Paul Trlica Papers and Photography Collection. His studio in Granger, Texas, advertised that his “Photographs Tell the Story,” and his work does tell the story of both division and diversity in his segregated multicultural Texas town.[8]

During the pandemic, some of us are viewing the world through the looking glasses of our computer screens. With the Ransom Center closed, I see its windows not in person but through my memory or in digital reproductions. The windows here are isolated, not together, as our community too is working remotely. This limitation allows me to see each window close-up, to slow down and focus on it, to go down the rabbit-hole of research or recollection. At the same time, it makes me appreciate even more what is missing: the experience of the windows in context together.

When I am on site, my eyes are drawn up and around the windows by different symmetries that only reveal themselves through slow looking. A flower window reproducing a nineteenth-century “photogenic drawing” jogs my memory of the Disney’s Tenniel-inspired version of Alice’s Adventures in Wonderland. My eye is drawn up further to notice the visual symmetry between the bushy flower and a tree that appears to grow in a train station. A closer look reveals it to be the Crystal Palace, the structure that housed the Great Exhibition in 1851 in London.

The Crystal Palace was an architectural marvel to some and a “monstrous greenhouse” to others.[9] The splendor of the enormous glass and iron building encased the finest new manufactured goods from around the British Empire, ranging from steam engines, biscuits, large nuggets of minerals, and “the largest plate-glass mirror” alongside “national” crafts like silk from Lyon or battle tableaus from Austria.[10] An enormous tree—an elm—is central to the photograph. In fact, you can make out little else. The tree gives a sense of the enormity of the space and the mastery of nature implicit in the design. As a visual matter, it makes me also think of the trees in the Ransom Center plaza. Through the windows, the trees and plants outside look like they belong within the realm of the Center’s space. The windows extend the threshold of the building out into the world and draw the outside in.

All of the slow research, study, work, and careful looking that happens on the inside of the building—in the Reading Room and exhibition spaces—are mirrored and heightened for the visitor and the passersby on the outside. The windows engage an onlooker into the experience and enjoyment of the Center’s archives: Hunting for patterns among collections. Taking pleasure in oddities and masterpieces alike. Locating meaning in unfinished and ephemeral things. Attempting to place varied cultural products in a structure and conversation.
—ANNE TERRILL

There’s a window that stands out to me right next to the Crystal Palace with its glass-on-glass-on-glass effect, and it is a complicated geometric shape. It looks a bit like a Moravian star or a crystal structure. I learn it is an illustration of a small, stellated dodecahedron also known—adorably—as a “hedgehog,” from a work by Johannes Kepler, Harmonices Mundi (The Harmony of the World). Kepler finds harmony in the universe through studying shapes and forms like the hedgehog, which give the universe “congruence” in “structure and bodily form.”[11] Although an arcane text to me, I marvel at Kepler’s commitment to finding obscure connections in the world and to making sense of the patterns with complex and beautiful forms like the hedgehog. It makes me also think that the windows possess harmonies of their own on a shared pane of glass.

The windows flatten not just the space on which the collected objects are arrayed; it flattens the received hierarchies of works. Where a previous generation of libraries or museums might adorn their façades with great writers or muses, signifying great achievements, the Ransom Center places ephemera next to icons; high art with low; drafts with finished products. The windows offer transparency and invitation to the collections, researchers, and visitors inside, where if you see your reflection in the glass, you become part of the story. Like the strolling James Joyce or the intensely gazing Gloria Swanson, the windows are a provocation to slow down and look at everything. They are an enticement to visitors to participate in the joys of working with the archive that we anticipate returning to in the post-pandemic future.

Anne Terrill is a Visitor Services Assistant at the Harry Ransom Center. Prior to joining the Ransom Center, she worked as a guide at Glenstone, a contemporary art museum in Potomac, Maryland. She is currently working on a project to broaden access to information about the Center's windows.