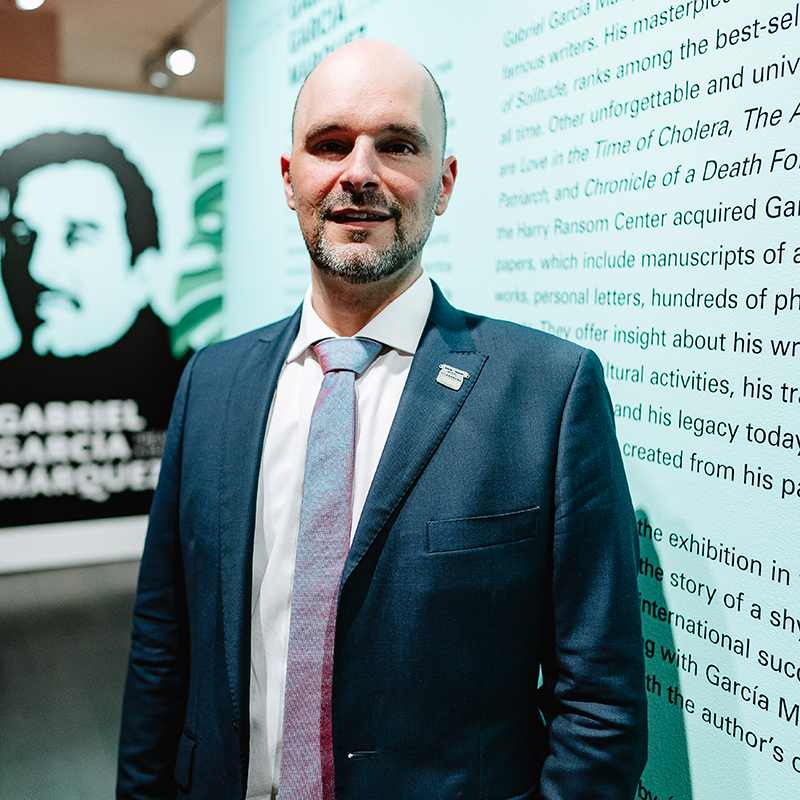 Excerpt from Ascent to Glory: How One Hundred Years of Solitude Was Written and Became a Global Classic (New York, Columbia University Press, 2020) by Álvaro Santana-Acuña, guest curator for the Gabriel García Márquez: The Making of a Global Writer exhibition on view through Jan. 2, 2022 in the galleries. Used by arrangement with the Publisher. All rights reserved.

“I remember quite distinctly,” Gabriel García Márquez confessed, “the day that with enormous difficulty I finished the first sentence and I asked myself, terrified, what the hell came next. In fact, until the galleon was discovered in the middle of the jungle [halfway through chapter 1] I didn’t really think the book would get anywhere.” Once he was certain that the novel was going somewhere, he quit his job in an advertising agency and stopped collaborating with writer Luis Alcoriza on two film scripts. As time passed, he had to make financial sacrifices, including pawning family possessions. But he was not a bankrupt writer. He had found, to paraphrase Virginia Woolf, a social room of his own to write undisturbed. The group of artists called the “Mafia”, the literary agency Balcells, and his close friends created a patronage system to support his writing project financially, professionally, and emotionally. In September 1965, he retreated from regular paid work and lived mostly on credit until August 1966, when he finished the manuscript.

First of all, García Márquez had to decide which novel to write. In late 1964, about eight months before he started One Hundred Years of Solitude, he was working on at least two things: on the movie script for Presagio (Omen), “the story of a town that is coming to an end,” and a novel about a dictator. In May 1965, the script for Presagio was not finished, and he had also changed the novel’s plot: it would instead be about the “solitude” of a despot.  Thus, by mid-1965, he had three themes on his writing desk: solitude, a town in disarray, and a despot. During the summer and early fall, he realized that he could blend these three themes in a single novel.

Article: How Gabriel García Márquez’s One Hundred Years of Solitude became a classic.

In addition to combining themes for the novel, García Márquez abandoned his creative habits of the past two decades. Until then, he had done most of his writing after working hours. Now, he shifted to daytime work. To write his novel full-time, he adopted an office schedule, writing daily from about 8–9 a.m. to 4–8 p.m., including most weekends. He created a work environment conducive to enforce discipline and minimize distractions. He began with his own body: he wore overalls while writing. Then, he and his wife arranged a separate small room on the ground floor. His workspace was about seventy-five square feet, with a window onto the backyard and a small bathroom. The space had a few dozen books on shelves, a couch, and a table with his typewriter. On the wall, along with two posters and a few photos, as the novel advanced, he stuck charts with the history of Macondo and the genealogy of the Buendía family. To further enforce discipline, he cut off his social and even family life. “My children”, he once admitted, “remember me as a man who was locked in a room and never left.” As Mexican literary critic Emmanuel Carballo put it, he wrote “like a crazy person. He did not do anything else. He stopped seeing friends.”

During the writing process, as he said in an interview, he kept notebooks to keep track of the plot,

When I finished the book, I had at least forty of these notebooks. Because I was typing chapter three, but in the notebook, I was already in chapter twelve, chapter fifteen, because the book was taking me at high speed. I couldn’t let it escape, so in the school notebook I wrote the diary of the book, because at any time, when I needed to know where the story was going, I checked the notebook.

When he was stuck, could not write anything new, or was feeling lazy, he copied entire chapters again to keep the rhythm going. He relied on the best possible technological and human resources that he could afford then. He started typing the novel on a Torpedo 18—a portable mechanical typewriter—but ended up writing most of it on a Smith-Corona Electric 12, one of the first portable electric typewriters, which allowed him to write faster and with fewer typos. He also hired a professional typist, Esperanza Araiza, who had typed novels for “Mafia” members, to make clean copies of his work in progress and the final manuscript. Thanks to her assistance, García Márquez focused on writing and wasted no time typing clean copies of the originals, which were full of his numerous handwritten corrections.

Article: A history of Gabriel García Márquez’s One Hundred Years of Solitude.

Months of writing passed and then, in July 1966, García Márquez was ready to work with the typist on editing the final manuscript for the publisher. He was happy. In a letter to his friend, Mexican writer Carlos Fuentes, he wrote, “I feel [the novel] turned out better than I expected.” However, the insecurity that accompanied him during the writing returned stronger than ever. In a letter to his Colombian friend Plinio Apuleyo Mendoza on August 24, a somber and exhausted García Márquez confessed not knowing what would happen with the novel. He shared his angst with Fuentes, too: “Suddenly, I was terrified, as if I had really said nothing in [those] sheets, and I locked myself up with the neurotic purpose of doing the novel again in a different way.” At the end, he only made a few big cuts and cleaned up the text. The result was a manuscript of four hundred ninety sheets, which took him about fourteen months of work. (He yielded an average of one clean sheet or between two hundred and fifty and three hundred definitive words per day.) In late August or early September, he sent the manuscript from Mexico City to Sudamericana press in Buenos Aires. But his insecurity still lingered: “I am waiting for the readers of Sudamericana to tell me that it is shit.”

Only in retrospect, after the global success of One Hundred Years of Solitude, Garcia Márquez said, “It was a great time because I was writing like a train. That is the best thing that can happen to a writer.” But the truth is that he wrote most of it under a lot of stress. He smoked about sixty cigarettes per day (twenty thousand in total) to write the novel, and took passiflorine, a natural medicine, to lessen his anxiety. A neighbor remembers seeing a restless García Márquez often seated on the street curb in front of his house and smoking non-stop. Meanwhile, his wife Mercedes developed a stomach ulcer. Her husband’s anxiety peaked in March 1967, when he sent the final galleys to the publisher after a previous set of galleys got lost in the mail. He suffered from an episode of nervous arrhythmia while driving on a highway in Mexico City and had to pull over to the side to calm down. This was one of several moments in which he asked himself, his wife, and his friends, “What am I going to do if the novel is bad?”