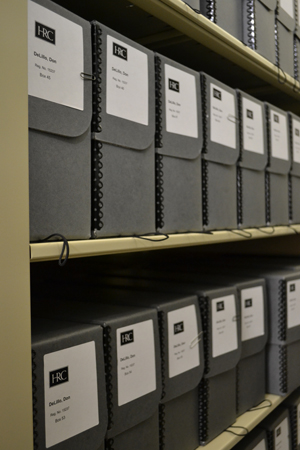 Mary Holland  is an Assistant Professor of English at SUNY New Paltz. She recently spent time working in the David Foster Wallace and Don DeLillo archives at the Ransom Center. Her work, which was funded by the Andrew W. Mellon Foundation Research Fellowship Endowment, will be used in her article “‘Your head gets in the way’: Distortion, Vision, and Influence in Barth’s Lost in the Funhouse and Wallace’s Brief Interviews with Hideous Men.”

Last August, I spent six glorious days working in the David Foster Wallace and Don DeLillo archives at the Harry Ransom Center, research made possible by a travel stipend generously awarded by the Center. A week is a strange amount of time to spend in a place filled to the gills with archival treasures beyond the imagination of an academic wearied by paper-grading and class prep. At first, encountering this abundance in the framework of a week’s stay threatens to trigger an unhelpful paralysis in reaction to intense frustration. I managed to combat such stultification by using every available moment to gather information that I could examine in stolen moments of leisure once I was home.  During my stay, I looked at most of the Wallace materials and a good portion of the DeLillo materials.

For a longtime lover of Wallace’s work, the archive of his drafts, letters, and annotated books is exhilarating and revelatory. I read with glee his comments, written with his trademark tiny handwriting, in the margins of books I’ve never seen him quote from but knew in my gut he had to have mindfully read; I found in drafts of his work scribblings about other pieces he’d written much earlier or later, establishing how fluid and overlapping his creative process was—that his process for creating fiction was as recursive as the fiction he created.

The DeLillo archive is far vaster than the Wallace one and requires more time for full exploration than I could wrench from my life last August. But I did examine research folders for several of DeLillo’s novels, as well as multiple drafts of a few novels: one could not paint a clearer picture of the enormous differences between Wallace’s and DeLillo’s writing processes than by putting the two authors’ drafts side by side. Whereas DeLillo builds a novel like a house, crafting it room by room, paragraph by paragraph, all aiming to fit a blueprint he’s mapped out well ahead, Wallace’s novels spilled out of him like water, going where they would, joining other unexpected streams, requiring repeated and concerted acts of containment, reshaping, and solidification before becoming the complex crystalline structures they are. I also found some startling connections between novels by DeLillo I had previously not read as connected, and these kinds of discoveries will certainly fuel my next critical work on DeLillo.

Landing at such a place as the Ransom Center with only a week to stay before shoving off again is certainly a real test of fortitude and focus. (Yet I gladly set both aside for lost hours when I became passionately absorbed in this or that planned or unplanned thing: I think I spent an hour just reading letters from Gordon Lish to DeLillo. Lish’s cocky, melodramatic persona is not to be missed.) But every time I jogged up the stairs to the reading room on an energized morning, or down again on a tired evening for that well-earned beer on Sixth Street, I did so with enormous gratitude that the Center exists, that its staff members are so helpful and kind, and that I was afforded my week of work there.