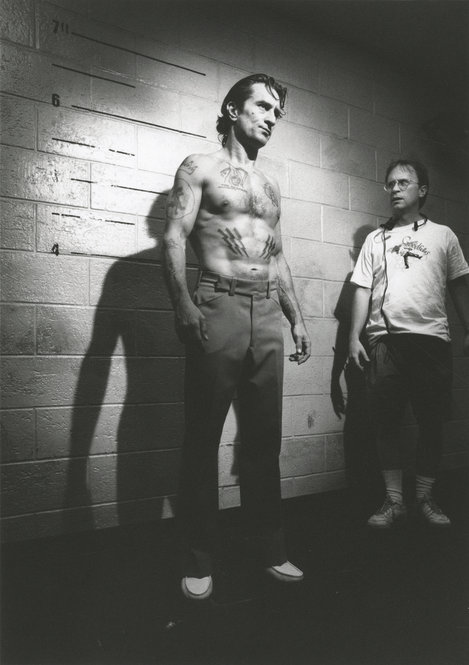 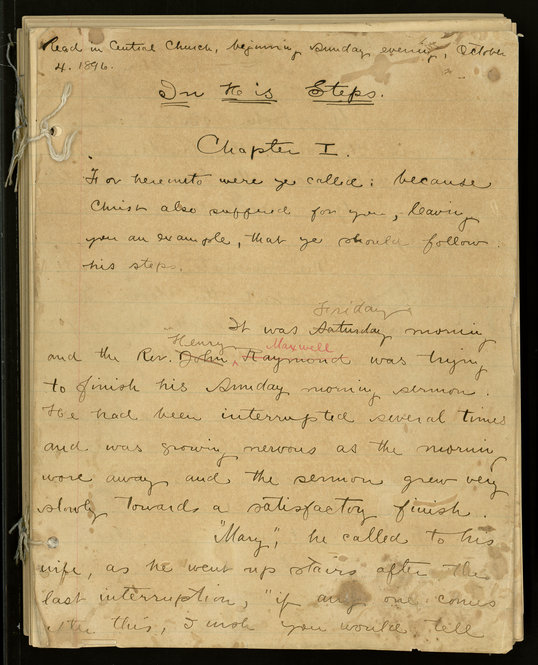 In the 1890s, Kansas minister Charles M. Sheldon (1857–1946) turned to “sermon stories” to engage his congregation. In 1896, Sheldon began reading to the Central Church of Topeka a new series of stories called In His Steps. Like other Sheldon sermon stories, In His Steps ran as a serial in The Advance (Chicago) before being published as a book.

Sheldon and his publishers, who had failed to properly secure a copyright for In His Steps, were stunned at the novel’s success—and all of the pirated editions that emerged. In His Steps became a runaway bestseller in the United States and England.

Sheldon took his inspiration and title from I Peter 2:21 and used the newly revised King James Bible (1881/1885) as his source text: “For here unto were ye called: because Christ also suffered for you, leaving you an example, that ye should follow his steps.”

The 12 central characters in the novel take a pledge to live their lives guided by the question, “What would Jesus do?” As Sheldon was part of the larger Social Gospel movement that sought to improve social problems throughout the world, much of the novel centers on how characters used the pledge to minister to the needs of the urban poor and to fight the destructive effects of alcohol. The popularity of the novel waned, but it was “rediscovered” in the 1990s, and the question “What would Jesus do?” again swept the country, with the four letters “WWJD” appearing on bracelets, bumper stickers, and t-shirts. 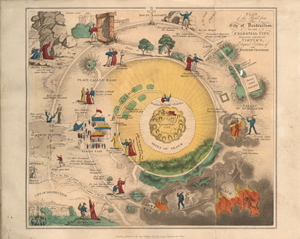 Few writers have been as biblically obsessed as John Bunyan (1628–1688). In his spiritual autobiography, he writes of being literally accosted, struck, and pursued by Bible verses wherever he went. His life, like his writings, was a biblical allegory. One of his most famous works, The Pilgrim’s Progress, was the most popular book in English, apart from the Bible itself. Bunyan wrote the allegory during his imprisonment for preaching without the sanction of the Church of England. The novel follows the central character Christian on his journey “from this world to that which is to come,” and is evocative of such works as Dante’s Divine Comedy. The plan or map helps readers follow the protagonist’s journey and provides an effective plot summary as well, as it depicts major events of Christian’s voyage to the Celestial City. Both the style and language of The Pilgrim’s Progress demonstrate the profound influence the King James translation had on Bunyan. 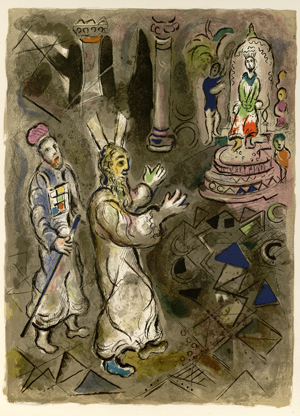 From the very beginning of printing, the Bible was regarded as the ultimate challenge. It presented printers and artists with the daunting task of creating an appropriate medium for communicating sacred text. They met this challenge with widely divergent methods. Some favored sharp, clean typography and traditional artistic approaches, placing as little as possible between the reader and the word. Others celebrated the text with elaborate typographical or artistic interpretations of biblical passages.

One such example of the latter is this large publication in which the text of Exodus is paired with 24 color lithographs by artist Marc Chagall (1887–1985). The prints show Chagall’s expert use of color and are representative of the lyrical, dream-like scenes for which the artist is known. The Story of Exodus represents a major focus of Chagall’s work, namely Judaic spirituality and Hasidism. One of the great lithographers of modern art, Chagall produced more than 1,000 original lithographs over the course of his career.

Fifteen of the 24 prints from The Story of Exodus are on view in the exhibition The King James Bible: Its History and Influence through July 29. 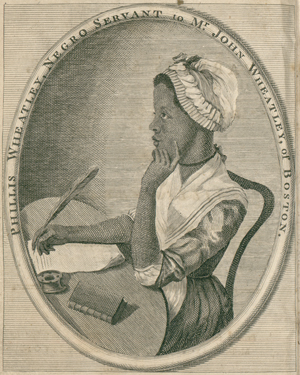 Phillis Wheatley (ca. 1753–1784) was born in Africa and sold into slavery. At the age of seven or eight she was purchased by a Boston tailor, John Wheatley, for his wife. While in the Wheatley household, Wheatley learned to read and write. Within 16 months of her arrival, Wheatley said she could read “the most difficult part of the sacred writings.” She also read extensively from the poetry of John Milton, Alexander Pope, and Thomas Gray, as well as classics from Ovid, Horace, and Virgil.

Wheatley began writing her own poetry, and in September 1773, her Poems on Various Subjects, Religious and Moral was published in London. As the title suggests, Wheatley’s collected poems explored a variety of topics, from the well-known “On Being Brought from Africa to America” to elegies on the deaths of loved ones to a poem simply titled “On Imagination.” Two of these poems, “Goliath of Gath” and “Isaiah lxiii. 1-8,” incorporate the language of the King James Bible. This excerpt from “Isaiah” reveals the influence of the King James Version on Wheatley:

“Mine was the act,” th’ Almighty Saviour said,

And shook the dazzling glories of his head,

“When all forsook I trod the press alone,

“And conquer’d by omnipotence my own;

“For man the wrath of an immortal God:

“My soul I sacrific’d with willing hand;

“Sinless I stood before the avenging frown,

“Atoning thus for vices not my own.”

Like Milton, Wheatley incorporated elements of classical literature into her poetry. Her retelling of the story of Goliath not only reproduced the language of the King James Bible but also followed the conventions of classical epic poetry. Wheatley’s poetry was largely forgotten after her death until abolitionists rediscovered and popularized her work in the 1830s.

Some of Wheatley’s Poems on Various Subjects, Religious and Moral and those of other poets inspired by the King James Bible are on view in the exhibition The King James Bible: Its History and Influence, through July 29. 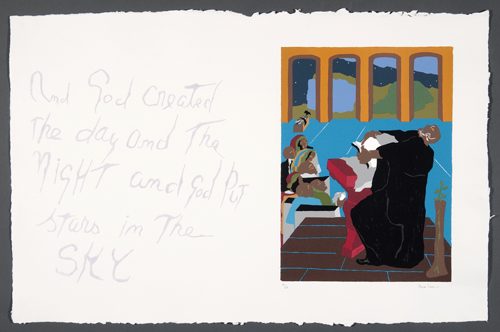