If I were to ask you what the “down there” part of your anatomy is called, you and most people would probably answer vagina. And if this was a question on some hot-shot big-prize game show, you would sadly go home empty-handed. When it comes to the entire female genitalia, terminology is often thrown around and used in a coded manner. We often use “vagina” to refer to the whole shabang but in reality there is a whole other world down there, and the vagina is only one part of it.

Most people don’t know very much about what the healthy female genitalia looks like or its basic anatomical structure. Either we weren’t taught about it in our sex ed classes (assuming we even had any) or were taught about it incorrectly. So, forget everything you know or may think you know about the party in your pants because this is your comprehensive guide to the elusive female reproductive anatomy.

Let’s start by debunking the biggest misconception of them all.

If handed a diagram of the female genital area, many of you would most likely label the vagina as the entire external region. Which is, to say the least, incorrect (cue the womp womp womp). The vagina actually sits inside of your body. What you think is the vagina, is actually called the vulva. The vulva is the external part of female genitalia and serves as a form of protection for the sexual organs, urinary opening, and vagina (all of which are situated inside of your body). The vulva is also responsible for much of a women’s sexual responses. Now that this is cleared up, I think we can all agree that we need to give our vulva more credit than she’s getting. 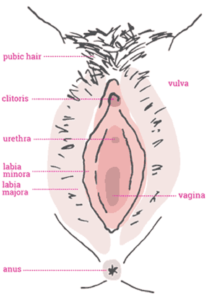 The outer lips of the vulva are called the labia majora. These are the first things that you see when you look down there and is the area where pubic hair grows naturally. The function of the labia majora is to protect the internal and sensitive parts of the female genitalia. Next are the inner lips, the labia minora, which provide an additional layer of protection and have oil glands that secrete lubrication. With that being said, it seems that the differing appearance of the labia is a cause of stress for many women. Note that the labia is as unique as our fingerprints and they come in all different sizes, symmetries, shapes and colors. Sometimes they match, sometimes they don’t. This is all completely normal and there is no right or wrong way the labia should look, so take charge and embrace the uniqueness of your external anatomy!

Next is what most people have been waiting for: the clitoris.

The tip of the clitoris (also called the glans) is the part that is visible and located at the top of your vulva. It’s the little nub you see when you spread your labia. The tip of the clitoris is covered by the clitoral hood, a flap of skin that slides back and forth, and protects the clitoris from any unwanted stimulation. Notice how at the beginning of this paragraph, I said “the tip of the clitoris,” and not just “the clitoris.” Yup, there’s more, and it’s pretty mind-blowing. The entire clitoris is actually a wishbone-like structure that extends from the glans (outside of your body) to deep inside your body below the labia majora, down on both sides of the vagina. Fun fact, the full clitoris structure wasn’t even discovered until 1998, but we’ll talk about the lack of research priority surrounding female pleasure and female sex anatomy another time (sips tea). 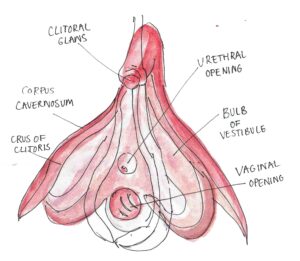 The clitoris is made of spongy tissue, and becomes swollen when you’re aroused. It contains thousands of nerve endings so it is very sensitive and for many women, stimulating it is the best way to have an orgasm. So thank you to you, clitoris. Although we can not see you, we feel your presence nonetheless.

Below the urethra is the vestibule, also known as the vaginal opening. This is where menstrual blood leaves and where babies come out of. You can think of the vestibule as an entrance hall or lobby leading to the main area inside your body aka the vagina.

Now we get to the vagina. Side note: isn’t it crazy how complex the female anatomy is and how misleading it is to call the whole thing a vagina? Anyways, the vagina is a tube that connects your vulva to your cervix and uterus (both located deep inside of the body). 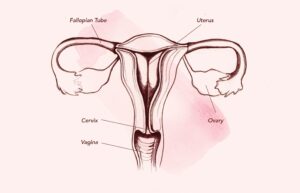 Although the vagina is referred to as a tube here, keep in mind that the vagina is not a tube that is always open. In fact, the vagina acts more like a stretchy muscle, and at rest, the walls of the vagina remains closed and collapsed unless there is something inside of it (a finger, tampon, sex toy, etc.).

The cervix is located right between the vagina and the uterus. It’s a cylinder-shaped tissue with a tiny dimple-like hole in the middle. It looks sort of like a donut, minus the glaze and powdered sugar. The cervix is the place your OB/GYN takes a sample for a Pap test. It also opens before and during childbirth. Besides that, the cervix stays close and opens up only a tiny amount to let period blood and other menstrual fluids out of the body and sperm into it. You can also feel your cervix at the end of your vagina if you insert a finger, penis, or whatever it may be, into your vagina. This piece of knowledge breaks another misconception. Things like tampons and other objects inserted into the vagina can’t get lost inside of your body because the cervix is like a shut door that won’t let those things through.

Next, the uterus. The uterus is a pear-shaped organ that houses a fetus during pregnancy. Some people call it the “womb.” Every 28-30 days or so (this really depends on the person), the uterus sheds its lining if you are not pregnant and this is the reason why we have periods.

Finally we have the fallopian tubes and ovaries. Every month, eggs from your ovaries float down two narrow tubes to your uterus. These eggs sit tight and wait. If sperm reaches these eggs then the process of baby formation begins.

Hopefully with your newly acquired knowledge of the vagina and beyond, you can tread forth into the world knowing that there is some crazy, awesome, intricate magic happening down there. Also, there will be a quiz next week over this.