This ambitious historical anthology begins with the assertion that what is often presented as the origin of the United States with the Mayflower in 1620 overlooks the equally important earlier arrival in 1619 of the White Lion cargo ship, bringing the first captive Africans to the continent.  The 1619 Project wrestles with the problem that any history will always be incomplete due to the perspectives that any one author, or set of authors decides to leave out, by choice or due to a lack of historical evidence.

The 1619 Project has been in the news, often criticized as being a racist text against white people. However, in shifting the focus and bringing the African and African American perspective to the forefront, it questions much of the nation’s underlying mythology, such as the US being the land of opportunity, and that “all men are created equal”.

Throughout the wide-ranging contributions, much troubling historical details are presented.  One of the questions that can be raised from this analysis is: Would the prevailing view of the United States as an exemplary, moral and model democratic nation be possible without the economic and systematic foundation provided by the exploitation and the denial of rights of African and African-American enslaved people?  This disconnect can be understood as the foundation for many of the current struggles with race and class.  Furthermore, it also provides a starting place to address these issues. 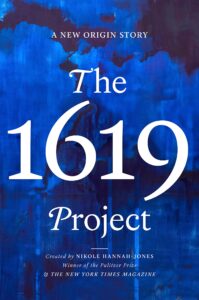 The repercussions of the racist institution of enslavement continue to this day.  The book is organized by essays by individual authors, each examining a specific topic, such as “Democracy”, “Capitalism” “Punishment”, Healthcare” and “Music”.   I highly recommend Chapter 17: Progress by Ibram X. Kendi.  Among other things, this chapter looks at the establishment (and necessity) of low wages in the US, linked to the disposable view of labor leading from the institution of enslavement.  “When the long sweep of American history is cast as a constant widening of equality and justice, it overlooks this parallel constant widening of inequality and injustice.” (Kendi p.424)