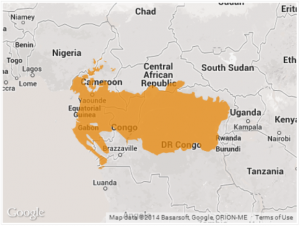 The Congo Basin is shared by 6 African countries and, according to the World Wildlife Fund, is home to 400 species of mammals, 1,000 species of birds and 700 species of fish, including at-risk species like gorilla, elephants, bonobos and chimpanzees. It is also home to 75 million people who rely on the region for food, water, shelter and their livelihoods.

The basin contains resources that are valuable to world markets and, as a result, the area is exploited for those resources. Specifically, logging, mining, drilling and hunting are destroying habitats, reducing animal populations and compromising the biodiversity of the basin. The largest driver of species reduction in the Congo Basin is illegal hunting, or bushmeat.

Illegal Bushmeat and why it Matters

Bushmeat refers to the capture of wild animal sold for human consumption. Generally hunted by local populations, bushmeat is vital to the food security of local communities. The trade in illegal bushmeat exists in villages, urban population centers and in the international market. In the Democratic Republic of Congo alone, WWF reports over a million tons of bushmeat are consumed each year. This high demand put enormous pressure of the species of the Congo Basin and, as a result, those species are threatened with extinction.

Due to the need for a sustainable solution to this problem, the illegal bushmeat trade must be reduced or eliminated through a combination of demand reduction coupled with viable, healthy food alternatives for local populations.

The Current Role of the U.S.

The U.S. is not a main driver of the illegal trade. Most remains in Africa, while the U.S. imports only a fraction of global bushmeat. According to the Fish and Wildlife Service, the bushmeat smuggled into the U.S. is mainly used in cultural festivals. These imports include primate parts, antelope and other animal products.

The U.S. demonstrates a national interest in conservation and species protection through participation in CITES, enforcement of the Endangered Species Act and 2008 amendments to the Lacey Act. Beyond this commitment to conservation, there is also a public health interest in curbing the trade of illegal bushmeat. For example, the spread of Ebola Hemorrhagic Virus is linked to human handling and consumption of primates.

If the U.S. isn’t a key driver of demand for bushmeat, what are we doing to curb wildlife loss in the Congo Basin? The U.S. Fish and Wildlife Service is involved in policing imports of illegal bushmeat. However, limited enforcement resources mean that only about 10% of illegal shipments are caught. As a result, the FWS partners with wildlife authorities and civil society groups in Tanzania, Uganda, Kenya and South Sudan. These partnerships are meant to reduce bushmeat hunting and consumption through:

Though these four countries are near the Congo Basin, none are among the six who actually control the land that comprises the Congo Basin. Undoubtedly, the U.S. has partnered with these countries because they have stronger governance than the other 6: Cameroon, Equatorial Guinea, Gabon, Congo, Democratic Republic of Congo and Central African Republic.

What can the U.S. do better?

The biggest opportunity to expand U.S. support for reduction in bushmeat hunting is through partnerships with the countries whose land includes the Congo Basin. Direct involvement in these countries is crucial to dealing with both the supply and demand sides of illegal bushmeat. Recognizing the challenges in dealing directly with these countries, a more feasible solution is to partner with World Wildlife Fund, the Jane Goodall Society and other groups working in the countries integral to the solution.

The WWF is striving for sustainable solutions through the following programs:

In 2013, U.S. governmental funds made up less than $3M of WWF’s operating budget. In contrast, FWS spent $80M around the globe as part of its Wildlife without Borders program, under which bushmeat is one of the critical issues. However, given WWF’s ability to work in the 6 countries which enclose the Condo Basin, U.S. bushmeat funds should be allocated to WWF or other organizations working in those countries. This reallocation of existing bushmeat reduction resources toward the epicenter of the problem strengths the likelihood of successful U.S. intervention.