In 2012, the former King of Spain went to Botswana to hunting elephants and paid more $60,000 for the opportunity. Prince William and Kate from the UK are also well known for their hunting activities. Jimmy John Liautaud, the owner of the famous sandwich franchise “Jimmy John”, also likes hunting and in 2013, he faced a huge campaign including boycott against his products for hunting in Africa. Other celebrities like Madonna, the US TV presenter Melissa Bachman or the British writer Jeanette Winterson, also enjoy hunting. The question is: are celebrities contributing to the destruction of wildlife when they are hunting or are they increasing funds to protect the animals? 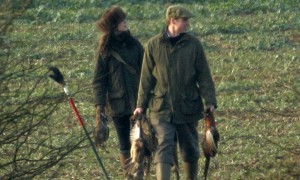 In the prehistoric era, humans hunted and fished for survival. Then, the agriculture and industrial revolution allowed humans to organize their economy differently. Hunting today has become a recreational activity for most of our modern societies.

Indeed, the appeal of wildlife hunting is still highly valued. High-income individuals practice recreation hunting and fishing of wildlife creating big movements of money. In 2011, expenditure in wildlife recreation activities in the US reached $144.7 billion. For example, when the former King of Spain when to Botswana, he paid 18,100 euros for the safari and 30,000 euros for hunting a big elephant, in total $60,600. This money is raised because sporting hunting and fishing is a well-regulated activity. In the US, states provide hunting permits and federal law protects migratory species and endangered species through the Endangered Species Act.

But big fortunes and celebrities like also to do hunting trips to Africa or South America. This activity can create revenues that in theory should return to protect local wildlife. To regulate hunting activities abroad, countries like the US and the EU have strong control mechanisms of sport trophy imports, trying to guarantee that their citizens pay the required fees for hunting permits in the developing word. Regardless of the possible loopholes, today sport and game hunting are legal activities and many celebrities who have the resources take advantage of this.

Animal rights groups denounced the cruelty of this practice and have run campaigns of “blame and shame” of celebrities. Media attention helps to raise awareness on wildlife conservation when the hunter is famous. Celebrities are supposed to engage in regulated hunting contributing to increased funds available for rangers and natural parks that protect animals from poaching. If that is the case and if we assume hunting permits are issued with a proper scientific study of the population maximum sustainability yield, then hunting should accomplish its goal of conserving wildlife.

On the other hand, publicity of hunting trophies and permit prices might signal how profitable poaching and trafficking of wildlife trophies can be. Moreover, hunter celebrities reinforce the idea that humans own nature and animals if they can just pay for them.

The main problem is that celebrities have a multiplier effect: if they hunt, everybody wants to hunt. Celebrities might be exposing global wildlife to that risk instead of contributing to wildlife conservation to reduce poaching and trafficking, they are contributing to the problem.

My own bias is that wildlife has an infinite value for today and future generations; therefore, there is no possible hunting price acceptable if it puts at risk the conservation of species.