Wildlife populations have declined 52% since 1970. This staggering statistic was published recently by the World Wildlife Foundation (WWF) in their annual Living Planet Report. The question is, where did the animals go? According to the report, and the WWF graphic below, human development and population growth are the primary causes of wildlife population decline. This human population growth has in turn led to a loss of wildlife habitat and an increase in human consumption of wildlife. Even if you feel apathetic toward wildlife, you should pay attention to this negative trend. If this decline in wildlife population continues, your life will undoubtedly be affected. 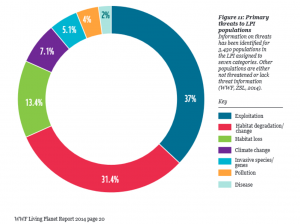 From a utilitarian point of view, wildlife provides Americans food. While most Americans do not regularly consume wild game or exotic animals, fisheries supply 15 per cent of the animal protein in our diets. Furthermore, according to the National Oceanic and Atmospheric Administration, nearly 2 million Americans are employed by our domestic fishing industry. The recent decline in fish populations, as documented in the WWF report, could have detrimental affects on the US fishing industry. 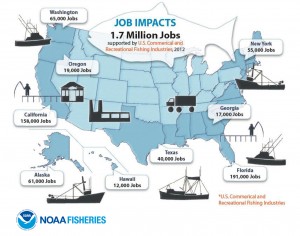 While the United States has implemented conservation policies to ensure our domestic fisheries sustainably take fish from the sea, other countries are not held to the same standards. The ocean’s subaqueous ecosystems are delicate and overfishing can have far reaching affects. Marine Science Today explains this phenomena:

“Overfishing can have an adverse effect on marine biodiversity. Every single aquatic plant and animal has a role to play when it comes to balancing the ecology. In order to thrive, marine creatures require a certain kind of environment and nutrients, for which they may be dependent on other organisms. Overfishing can [also] wreak havoc and destroy the environment and marine ecology and completely disrupt the food chain. For example, herring is a vital prey species for the cod. Therefore, when herring are overfished the cod population suffers as well. And this has a chain reaction on other species too. Therefore, it can be understood that if the food chain breaks at any level, it will have a domino effect on all living organisms in the chain.”

The oceans are interconnected, fish migrate, and overfishing in foreign waters can have a ripple affect upon United States fisheries. Canada’s Department of Fisheries and Oceans states,

“There is also growing evidence that the increased volume of fishing activity worldwide is having a very serious effect on the health of the oceans as a whole. When commercially valuable species are over exploited, other species and habitat that share the same ecosystem are affected.For example, recent studies suggest that overfishing of large shark species has had a ripple effect in the shark’s food chain, increasing the number of species, such as rays, that are usual prey for large sharks, which result in declining stocks of smaller fish and shellfish favored by these [rays].”

In summary, the WWF’s recent report should garner your interest in conservation. If we continue to harvest more fish than the oceans can replenish, the ocean’s fragile ecosystem will be tilted – this, in turn, will result in far reaching and unforeseen affects upon fisheries worldwide. Even if you don’t care about tigers and elephants or are even happy to see great white shark populations decline, you should review the report; because, human’s current path will have an effect upon your life in the not too distant future.