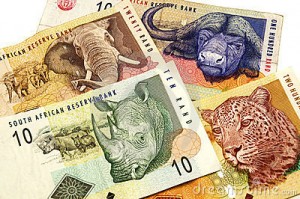 By one estimate, African sport hunting generates approximately $200 million annually. While sport hunting revenue is a small portion of  African countries’ GDPs, it can have a big impact on wildlife conservation and the populations of certain species. This revenue stream is sufficient enough to positively impact conservation and in some cases, if managed properly, could ensure the existence of a species. Needless to say, the stakes are large, and controversy surrounds the use of sport hunting revenue.

On one hand, conservation groups claim the revenues earned by the sport hunting industry are wasted and go directly into politicians’ pockets.  On the other hand, pro-sport hunting groups claim that their expenditures directly fund conservation and promote the livelihood of the species they are killing. Both sides cite studies and statistics to prove their claims, and it is difficult as a third unbiased party to determine which arguments hold the most weight.

In my attempt to determine how much of the sport hunting revenue stream reaches conservationists’ hands, I came across a study titled “Contribution of Hunting Tourism: How Significant Is This to National Economies?”. This study was conducted jointly by the United Nations Food and Agriculture Organization and International Council for Game and Wildlife Conservation and appeared to be neutral. Furthermore, this was the most detailed and thorough study conducted in the last five years that I was able to find.  The study examined Tanzania’s sport hunting industry in 2010 and attempted to track the Tanzanian sport hunting revenues through the government and to conservation groups. Below is a summary of their findings.

The study found that sport hunting revenue was generated through numerous sources:

“The Wildlife Division in Tanzania is responsible for the management and administration of all hunting, and receives funds from a variety of sources: revenue accruing from capture permits, game license fees, certificate of ownership, trophy export certificate, trophy dealer license, compounding fees, miscellaneous receipts and CITES fees account for approximately 1% of the total revenues, while the bulk (99%) accrue from hunting license and block fees”.

These revenue sources were further dissected to reveal the income and expenditure items and values of Tanzania’s hunting industry in 2010. 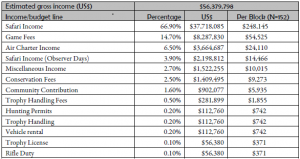 This study reveals that only 3% of sport hunting revenue of  $56 million annually is given to the local Tanzanian communities as discretionary spending. While 23% or $12 million (Wildlife Division fees) is given directly to Tanzania’s Wildlife Division, the government actually receives approximately 44% or $22 million of the sport hunting revenue through taxes and hidden fees. This revenue, while a minor part of the country’s GDP, could contribute toward wildlife conservation. However, it is unclear how much of that money is used for wildlife and land conservation. Due to a lack of transparency, the study could not conclude a direct correlation between sport hunting revenues and conservation in Tanzania.