2014 was a gloomy year for several iconic species. The Southern White Rhino was particularly hit hard, with 1,100+ killed in South Africa alone. As South Africa is home to 90% of the world’s rhino population (which currently stands less than 30,000 for all species of rhino), these numbers are extremely troubling. With prices of rhino horn reaching $65,000/kilo in parts of Asia, the trade shows no sign of slowing. If present trends continue, 2015 may be the year that marks the downfall of several species in addition to the rhino.

Conservation and scientific groups such as Nature and TRAFFIC have noted as much. Currently, over 22,000 species are threatened with extinction according to the International Union for Conservation of Nature. Somewhere between 500 to 36,000 species are going extinct every year (exact numbers are unknown and could be lower/higher). This number is estimated to possibly be 1,000 to 10,000 times the background extinction rate, which normally is considered to be 1 to 5 species per year. Richard Thomas, spokesman for TRAFFIC, stated that:

2015 will be key, possibly the most significant yet in the battle to save the world’s iconic animals

A number of iconic species may go extinct in 2015. The International Union for Conservation of Nature currently has 69 species categorized as “extinct in the wild”, with another 4,600+ categorized as “critically endangered” (defined as the species is facing an extremely high risk of extinction in the wild) This includes species such as: 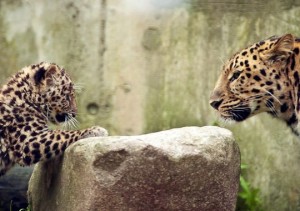 While not always the main driver of species decline, poaching has been increasing for the last several years. Over 100,000 elephants have been poached in the last three years alone. Much of this poaching is due to the combination of high unemployment in parts of Africa and a high demand of ivory and other animal parts from Asia. This poaching has taken a toll on both the animal populations as well as the individuals who work to stop such poaching. Ken Maggs, head of the environmental crimes unit at South Africa National Parks, states that:

There are some days we will have three contacts or firefights with poaching groups. The poaching groups are relentless. Day or night, it doesn’t stop…Such a large amount of money is being generated by rhino poaching that whole villages are being driven and kept afloat by illegal activities, money generated from rhino poaching.

Two poachers have already been killed in South Africa this year. This is in addition to three poachers that were killed in December. It certainly seems that the costs to human and animal life is on an upward trend that will most likely continue in 2015.