Religious groups can stop the supply and demand for illicit wildlife goods. There is potential to reduce a large portion of demand if Buddhist Monks in Thailand and the Catholic Church in the Philippines change their ways.

In Thailand, there is a “tiger temple”, located about 100 miles west of Bangkok that has been the subject of complaints by animal advocates who suspect the temple’s connection to the black market trade of tigers. 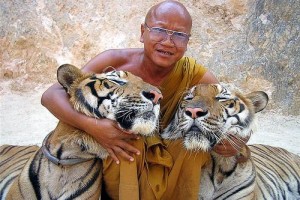 In February of 2015, the Thai government raided the facility and impounded more than 100 tigers, along with rare birds. This investigation might be able to prove that large numbers of tigers are ending up on the black market where their parts and pelt are priced at $50,000 – $60,000. Carole Baskin, the CEO of Florida Big Cat Rescue stated that there were, “way too many cats that are being bred and raised that aren’t showing up in sanctuaries. So, we know that something really horrible has to be happening to them, and until someone sheds light on it, it’s never going to stop.”

The fact that this is happening at a Buddhist Monastery is abhorrent. Wildlife trafficking goes against the principles of religion and has turned a Buddhist temple into a crime den.

According to a report by National Geographic magazine, the carving of Santo Nino done in ivory is fueling the slaughter of elephants. In recent years, over 19 tons of ivory have been seized bound for the Philippines, which is equivalent to 1,745 elephants. That just represents what the government was able to intercept. Much of the ivory brought into the country is shipped privately, slipping through borders.

Priests are the biggest collectors, and they actively encourage others to buy and sell the illicit good. The author of the National Geographic article on the ivory trade in the country was even advised by a leader of the Catholic Church, Monsignor Cristobal Garcia of Cebu, on how to smuggle ivory into the United States. The Monsignor has even called the smuggling an act of “devotion.”

Trafficking goes against the major tenets of these two religions. The religions’ prominent leaders, the Dalai Lama and the Pope, should be lobbied by activists so start change from the top down. While it will not stop sale and demand from these groups overnight, it will start to change the culture. The entire religion must take a stand on trafficking in order to stop it.